Out of indie left field comes one of the year’s most impressive genre films to date.

Those expecting anything other than a visceral, uncomfortable, violent, and deranged experience should check his or her self before purchasing a ticket; Green Room will undoubtedly gain a cult following, but your enjoyment of the film will come down to whether or not you’re willing to drink its particularly bloody Kool-Aid.

There are deplorable sights and sounds running throughout the film’s tight 95 minutes of repulsive acts and righteous vengeance. Green Room is terrifying, unbearably tense, and stomach-churning in its graphic content. At times that comes off as a sort of Hipster Saw; but its undeniable wit will outlive its own visits to garishness, numerous as they may be. 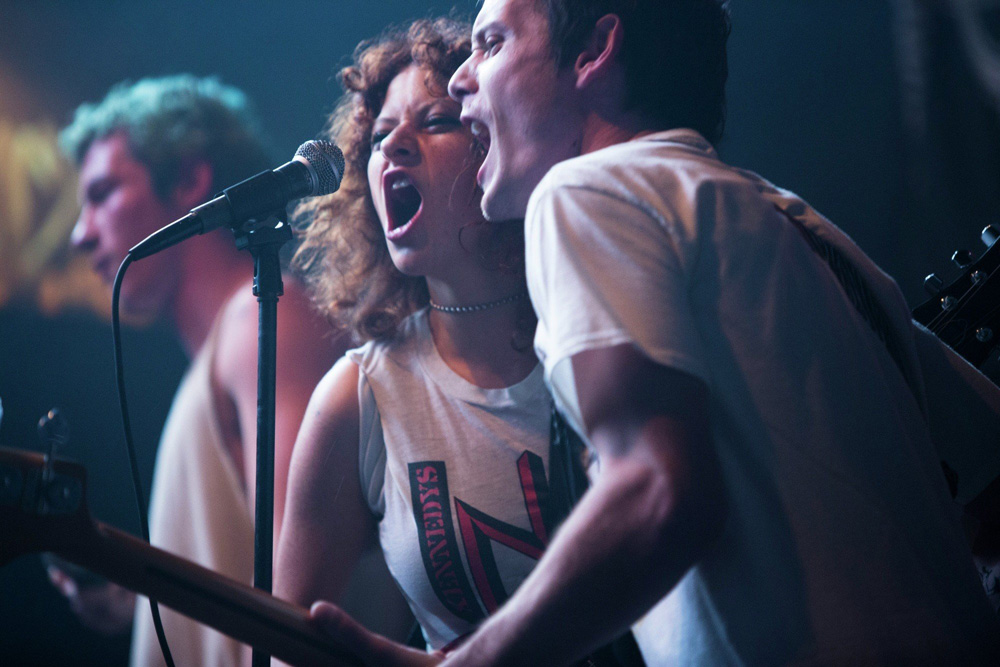 Hardcore band The Ain’t Rights are living the starving artist life on the road, and this particular road in Oregon is one tough son of a bitch to pass. The band is looking for any cash to keep their van, and therefore their tour, alive. Clutching a desperate last-ditch gig at a little joint in the woods gives their dreams of music stardom some hope. Unbeknownst to them, unfortunately, is the reveal that the bar is a neo-Nazi safeguard and filled with hateful types that, expectedly, scare the hell out of these performers. These band people are hardcore but they’re far from hateful. 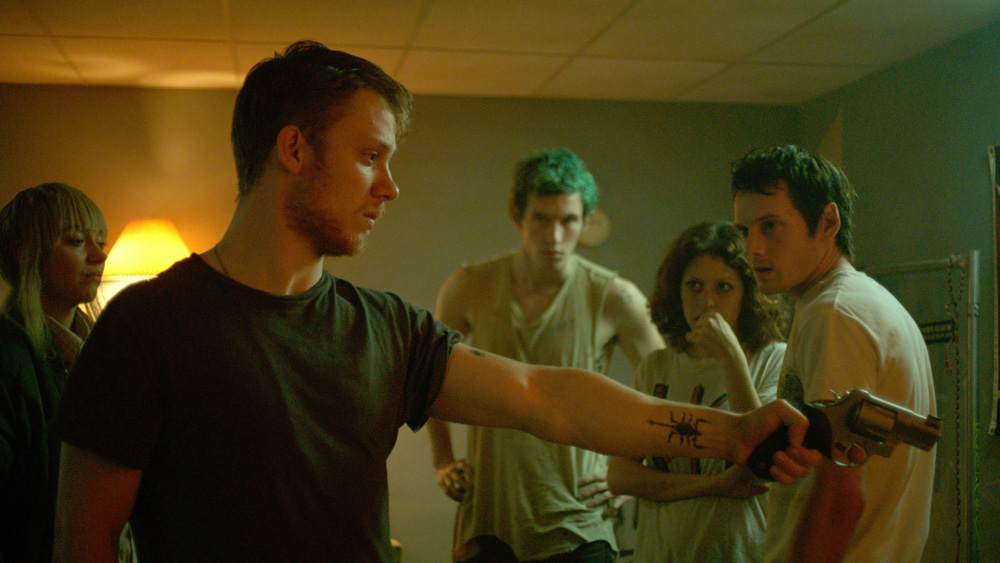 Pat (Anton Yelchin) suggests that his band open their set with a “joking” cover of “Nazi Punks, Fuck Off!” by Dead Kennedys. Fellow band mates Sam (Alia Shawkat from Arrested Development), Reece (Joe Cole), and Tiger (Callum Turner) maintain the front, survive through the gig, collect their cash, and shuffle as urgently as possible towards their exit. One last fateful trip to the titular backstage artist space finds the band searching for a forgotten cellphone but finding, instead, a murder scene. Witnesses to something large and unexpected for everyone involved, the band is confined by the bar’s goons while loyal neo-Nazi foot soldiers call in the big boss, the alpha Skinhead himself, Darcy (Patrick Stewart). Darcy’s got a framing to set up and a lot of folks to kill – anything to protect his bar and his red-laced followers. A backwoods deathtrap is set. What the band endures is brutally unforgiving and they’re aided only by the crime’s other remaining witness, Amber (Imogen Poots). 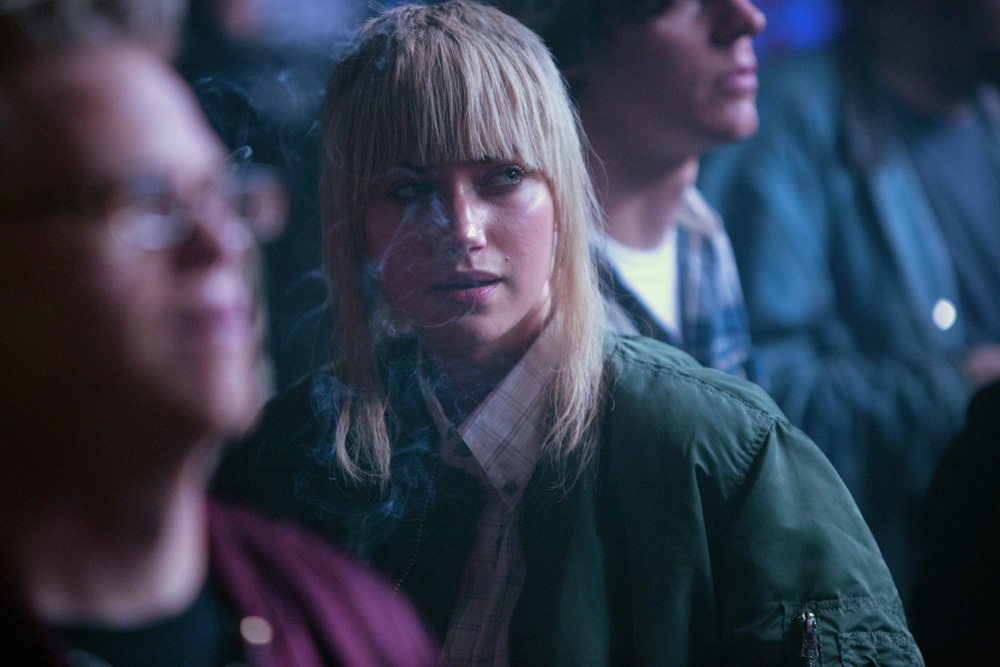 It might by now go without saying that the squeamish best avoid Green Room. Those that loved the modern genre indie sensibilities of It Follows, The Guest, and You’re Next will find plenty to admire about Green Room, if they can stomach it. The film is unrelenting and often both graphic and deeply unsettling all at once. Our slaughterhouse victims aren’t facing off against some hillbillies gone mad – these are some mean Nazi sons of bitches and they got a murder to hide and a heroin operation to maintain. The band were classically in the wrong place at the wrong time. The ends they arrive at, however, do not justify the band’s means.

If you’re one who wasn’t put off by the head-exploding messes found recently in The Hateful Eight and Inglourious Basterds (there’s that Tarantino again, that rascal) then the schlock found in Green Room isn’t going to do much to completely blow your socks off. You will find yourself surprised at the depth to be found and the new takes mined from the depths of writer-director Jeremy Saulnier’s brain. Where the trip takes you – with bloodthirsty pit bulls and shotgun blasts galore – will hopefully arrive at a place that you are open to enjoying as a cinematic genre experience at a supremely intense level. 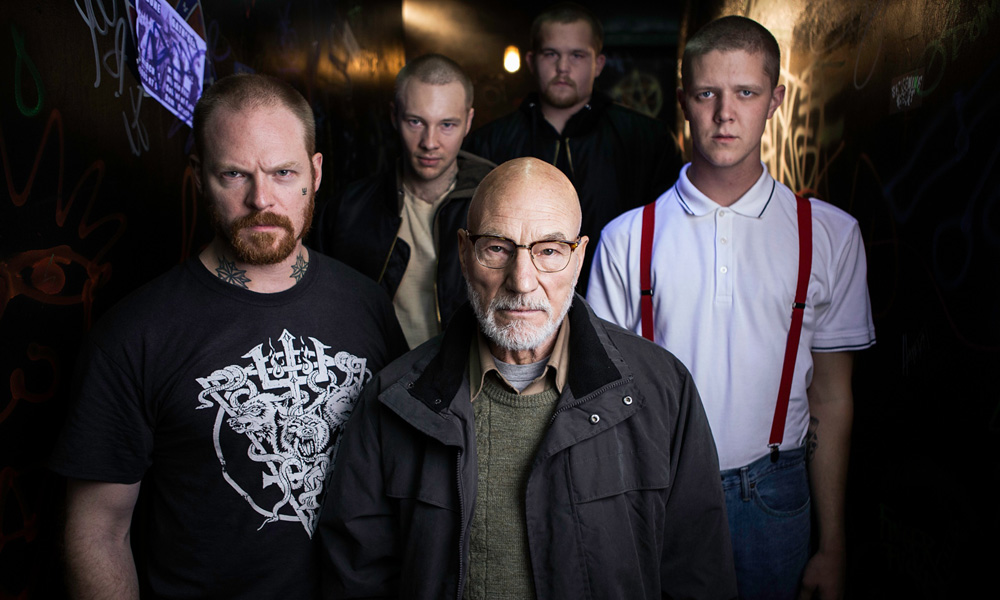 On its artistic merits alone, harsh as the surface may be, Green Room is one of the unexpected early highlights of the year. Stewart’s cold, unnerving performance alone should pique the interests of X-Men fans expanding their cinematic horizons. And Yelchin yet again shows that he’s a young actor with a committed intensity that should nearly ensure a long career in the industry. Those looking for a straight-up gorefest might be caught off-guard by the thoughtful character and world building worked up through the film’s first act. Either way you approach it, Green Room still earns its top tier status among the most buzzed about underdog features of 2016.