Remember playing with Hot Wheels when you were younger, or maybe you’re a parent like me and you still do, and you would drive them around in your room or on the couch and they would do some crazy stunts as if gravity didn’t exist? Guess what? They made a movie about that.

The Fast and Furious franchise has its demographic covered. Fast cars, big action, good looking people, rap music and really cheesy dialogue. People will actually flock to the theatre to see these movies.

This was director James Wan’s first film in the series but he is best known for horror films like Saw, The Conjuring and Insidious. 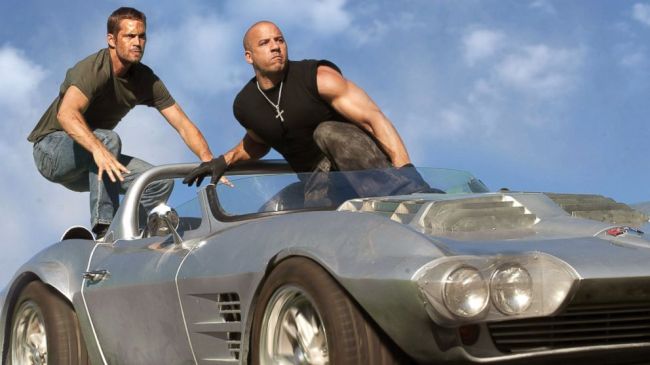 Guys, you just chastised your partner for dragging you to Fifty Shades of Grey, but going to see Furious 7 is better? It’s not.

I will say this, I understand that it’s complete escapism. I love action movies, but why has Hollywood taken the genre and completely killed it? We had Expendables and now this? Why is it that other parts of the world, mostly Asia, can create better kick ass films?

This latest installment picks up where number six left off, and they even tie together loose ends from the third installment.

After defeating the previous super-villain in film 6, Dominic Toretto (Vin Diesel) and Brian O’Connor (Paul Walker) are back in L.A. as free men. But their happiness is short-lived, thanks to one Deckard Shaw (Jason Statham), who is hell-bent on avenging his brother.

But let’s be honest, who cares about the plot. It’s not overly complicated. What matters the most is the spectacle. Cars are driven off of airplanes, a drone attacks the streets of Los Angeles and Paul Walker leaps off a bus as it’s falling off a cliff.

The biggest star of the film is not Duane “The Rock” Johnson but the CGI that was used ad nauseam. I’m sorry but if you honestly believe that cars can fall from the sky in a straight line as if they are flying, you need help. Let’s just throw physics and science out the window. Thanks to our friend the computer everything is possible.

CGI did come in handy when it came to finishing the film with the late Paul Walker. As many know, Walker died in a tragic car crash halfway through filming, so director James Wan had to finish the project using Walker’s brothers and computer animation.

At the ending of the film there was a scene that tipped its hat and said farewell to the long time star of the franchise. Without giving it away, it was a thoughtful moment.

When two vehicles can play a game of chicken at top speed and smash into each other head on and both drivers are able to walk away without a scratch, you know that this film is beyond ridiculous and almost a joke in itself. 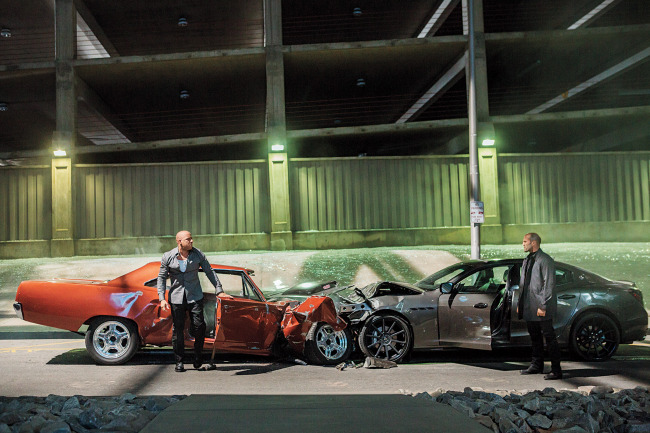 When you have one of the world’s best martial art action stars in Tony Jaa, who does his own goddamn stunts and who is in the film for maybe five minutes, that’s really sad. It was a complete missed opportunity.

God bless Ronda Rousey, who I am a big fan of, but let’s hope that when she morphs into an action star that she works on her delivery of lines. Like Jaa, she has a brief fight scene in the film that is very cool, but nobody should give her lines. Not until she has an acting coach.

I know there are many people who’ll go and check this film out. A lot of you have watched the entire series and don’t care that the franchise as a whole is probably the worst series of films ever created. I get it, it’s a guilty pleasure.

It’s pure cheese. There really isn’t much more to say about it. They are what they are. People are going to the theatre knowing full well what to expect and the movie will make buckets of cash.

In some ways it’s a sad commentary about art. Films like Whiplash or Birdman that won Oscars and are fantastic films don’t get nearly the attention from movie goers as films like Fifty Shades of Grey and Furious 7 get.

Escapism is fine, but I just wish that someone in Hollywood would actually go about it the right way. There needs to be some shred of believability. Just a small piece.

So to sum up the suck, Furious 7 is full of stupid CGI stunts, with horrible acting and dialogue along with a simplistic story with a ton of holes. Enjoy it.

When you go and see this movie, understand that it’s like going to the bar, meeting someone that appears to be attractive due to the eighth drink, you go home with them, have the one night stand, sneak out and do the walk of shame. That is how you should feel when you leave the theatre. Shameful. You’re dirty birds and you know it.

I have to give this film 2.5 raindrops out of 5. Some critics loved it because they were drunk, some of us just shake our heads wondering why. Mad Max Fury Road comes out in May and I hope it restores our faith in action films.

For more interesting movies coming out in the month of April, check out our 6-Flick-Picks for some of the ones that might be worth while checking out.