In my opinion, Dumb and Dumber is one of the greatest comedies ever made. Maybe it is partly due to how old I was when the film came out in 1994, but many of us still like to quote lines like “so you’re telling me there’s a chance” or “Hey guys! Whoa, big gulps huh? Alright… Well, see ya later!” The film became an instant cult classic.

When the sequel was announced, it was hard not to be a tad skeptical. Did we need a sequel? Was it 10 years too late?

It’s not like over the last few years the Farrelly brothers (Peter and Bobby) have been knocking it out of the park with cinematic success with comedy duds like Hall Pass and Three Stooges. To be honest, they really haven’t had a comedy hit since the underrated Me, Myself and Irene back in 2000. Some of you would say nothing good since There’s Something About Mary in 1998.

Dumb and Dumber To is now playing and I know most of you will instinctively flock to a nearby theatre like salmon of Capistrano, so here is my review of what has been a highly anticipated sequel.

Seeing Lloyd Christmas and Harry Dunne with wrinkles doesn’t seem right. Yet it works because the story picks up 20 years later. Lloyd is in a mental institution and Harry has been coming every Wednesday to change his mute buddy’s diaper.

Of course if you’ve seen the trailer (find it at the bottom of this post), all of it was one big goof. Lloyd was just foolin’ for 20 years. Harry asks “wouldn’t the joke been just as funny after 10 years?” Lloyd responds with “Not as.” Thus begins our journey with the two dumbest human beings on earth. 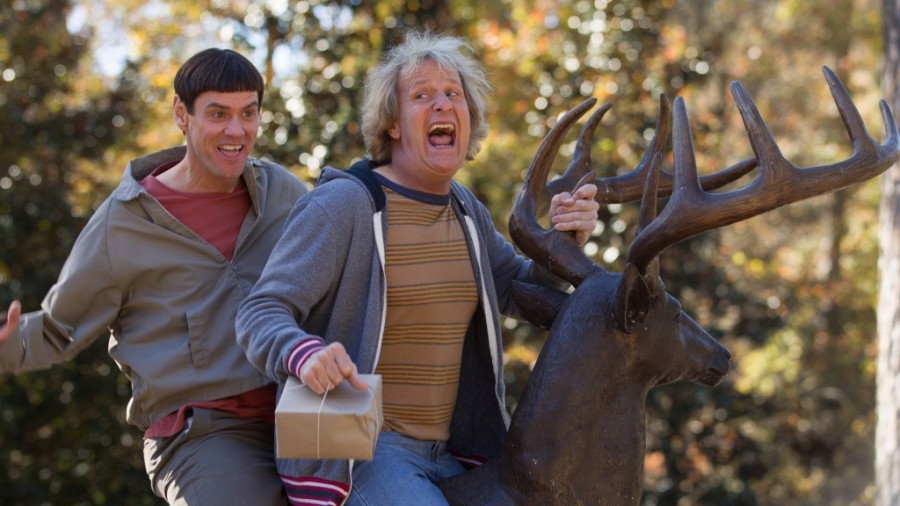 Oh that reminds me, why did the Farrelly brothers show some of the best comedy in the trailer? They didn’t have to do that. It killed some big laughs.

Anyway, Harry needs a kidney transplant because he is going to die so he decides that he would search for his long lost daughter Penny (Rachel Melvin) who was put up for adoption by Harry’s ex-flame Fraida Felcher (Kathleen Turner.)

So the two bumbling idiots hop into a hearse and travel from Rhode Island to El Paso (named after the bean dip) to see if Penny wants to be a donor.

Of course hilarity ensues, well kind of. The movie does have its moments of LOL – laughter out loud. There are even references to the original film, which although provide some nice nostalgic moments, really weren’t necessary and most of the time didn’t work. “Want to hear the second most annoying sound in the world?”

Penny grew up with a genius scientist for a father and was supposed to attend the KEN (not TED) Conference in El Paso to present her adoptive father’s “billion-dollar idea,” which was kept in a small box. Of course Penny forgets the box at home and Lloyd and Harry not only have to find her but keep the box safe from baddies who want it.

Why are we even discussing the plot?

It’s almost like the Farrelly brothers needed a story in order to insert fart jokes. Don’t get me wrong, I’m all for humour of the lowest common denominator, and there is plenty of that in this movie, but it is humour on par with most Adam Sandler flicks.

What I loved about the first Dumb and Dumber was that the comedy seemed.. smart? It was edgy and creative. The writing was fantastic and it put the Farrelly brothers on the map. They had their mojo in the ’90s. At some point they lost it.

Dumb and Dumber To doesn’t tread on new ground, in fact it is dumber..er.

Jim Carrey still has it when it comes to comedic timing and facial contortions and we are reminded that he once was one of the most brilliant comedians alive. For the love of God, give Jim a smart and funny script and let him go again. Comedy misses the rubber made Canadian.

Jeff Daniels appeared to go through the motions and mailed in his performance as Harry. I felt there was more substance to his act in the original, if that even makes sense.

Maybe it’s his age or too much Newsroom where he does his finest work. Whatever the case, I felt like he was doing an impression of Harry rather being committed to the material, but it’s not exactly top shelf writing either. 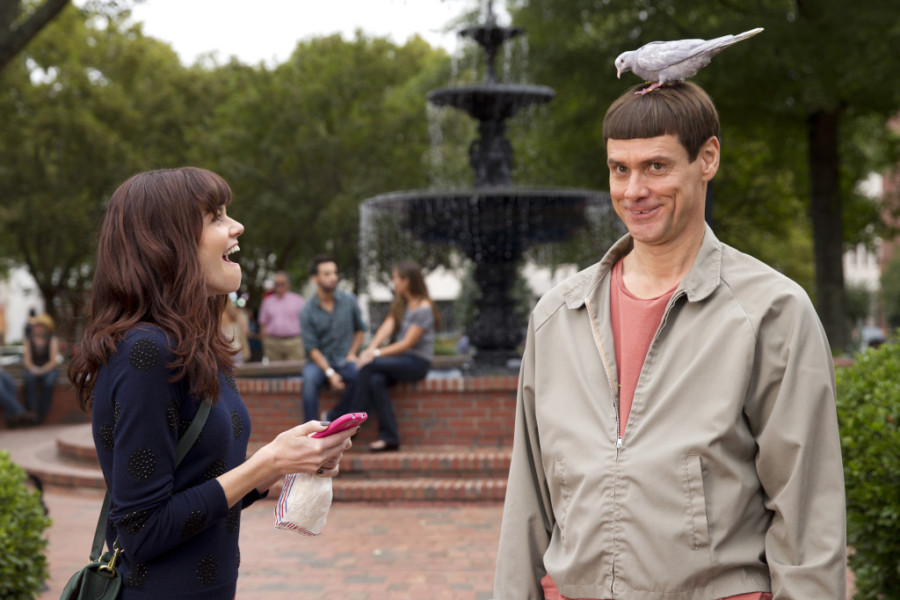 The jokes seemed forced where in the original everything seemed to flow with an unpredictable ease. It was cutting edge comedy, but that was in 1994. It’s 2014 now and you can’t get away with putting one over on movie goers.

If you’re going to make a sequel to a fantastic film that probably didn’t need one, the film better stand alone and be superior to the original or at least not be anchored by nostalgia.

I wanted to love this movie, but in the end I was left going, “meh.”

Don’t let this review stop you from seeing it because there are laughs to be had. You shouldn’t miss out on seeing Lloyd and Harry again, but don’t go into this thinking it will be on par with the original. It’s not.

You can go into your old DVD collection and watch the original over and over again. We know the lines verbatim. Dumb and Dumber stands the test of time, it’s funny. Dumb and Dumber To? “Not as.”