Without much warning and seemingly little fanfare we now have the world’s first film based on a smartphone game. Its arrival is a bit muted despite the the fact that pretty much everyone on the continent has played Angry Birds before. I mean, for a while it seemed like you couldn’t go anywhere without seeing somebody gleefully flicking away at their screens while birds kamikaze themselves from slingshots at their sworn swine enemy. The game was so ubiquitous you would’ve sworn it came pre-installed on every device. 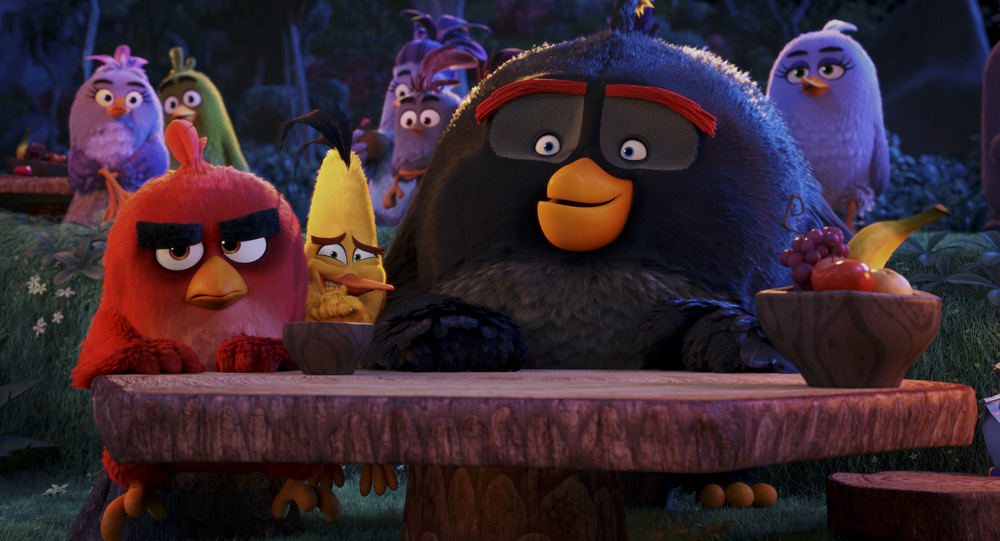 So now here we are, in the year 2016, with a full-on computer animated Hollywood summer blockbuster to cash in on the game’s popularity that just might be arriving a bit too late. Were you asking for it? Of course not. No one was. But now we’ve got it, and for what it is – in its caffeinated, eye-popping, visual glory – it ain’t half bad. You could do a hell of a lot worse with the concept, and there’s enough valid thematic material worth mining to find a lesson or two to take home and discuss. 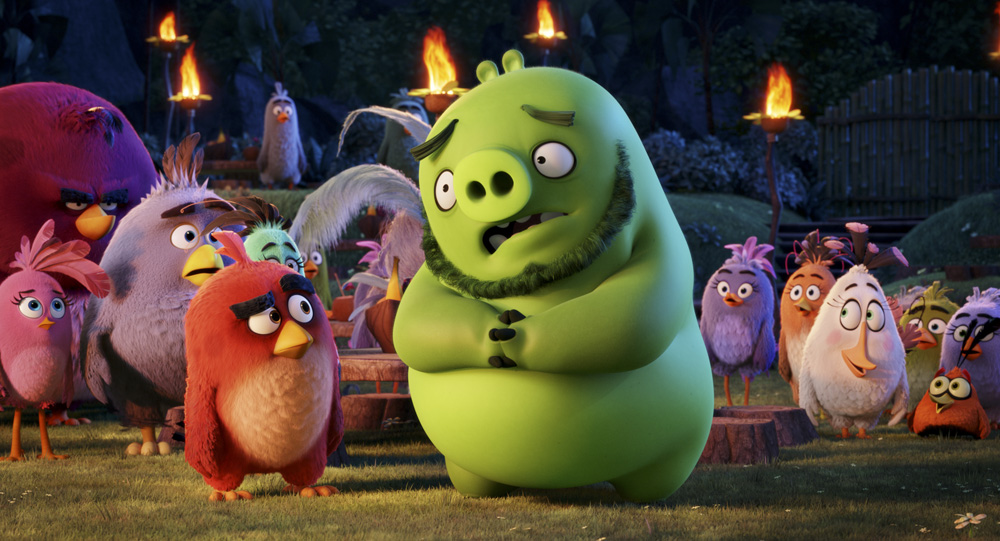 As the mascot of the cellular sensation, audiences are already familiar with the face of Red, voiced in The Angry Birds Movie by funnyman Jason Sudeikis. Red is the angriest bird in the whole flock. He’s an outcast from his village and after a rage-filled birthday party incident he’s sentenced to serve some hard time in anger management. His new age teacher (voiced by Maya Rudolph) doesn’t jive with him and his fellow angry birds Bomb (Danny McBride), Chuck (Josh Gad), and Terence (Sean Penn, communicating solely in growls and grunts) couldn’t be more off-putting to him. But when a ship of devious pigs (led by a green bastard voiced by Bill Hader) lands on the island, Red’s the only one who sees through their façade. But, the most hated bird in town has an uphill battle to face in the name of what he believes in. As you might have guessed, his anger management buddies join his side and catapult their way towards justice by delivering dive-bombing punishment for their egg-stealing enemies. 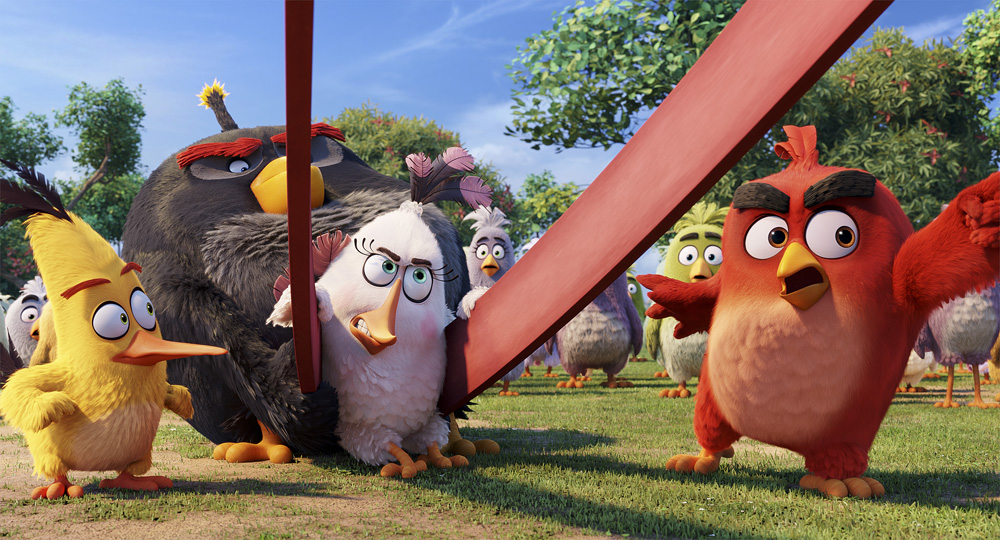 The most grating thing about many movies targeted at kids is that they generally tend to come off as completely surface-level fake. Worse yet, by the time they hit screen they’re practically yesterday’s news, ready to be replaced by the next shiny fad. Thankfully The Angry Birds Movie keeps its pop culture references few and far between. The Shrek series fell into this lazy routine way too early and too often where their characters just recite famous phrases or sing hit songs; you simply can not watch any of the sequels today because they’re all so desperately cloying to be considered “hip” for their times. There’s a bit of that “trying to hip it up for the kids” attitude at play here, but those moments are mercifully brief. Where The Angry Birds Movie succeeds is in keeping its focus on the characters and themes at the heart of the story. 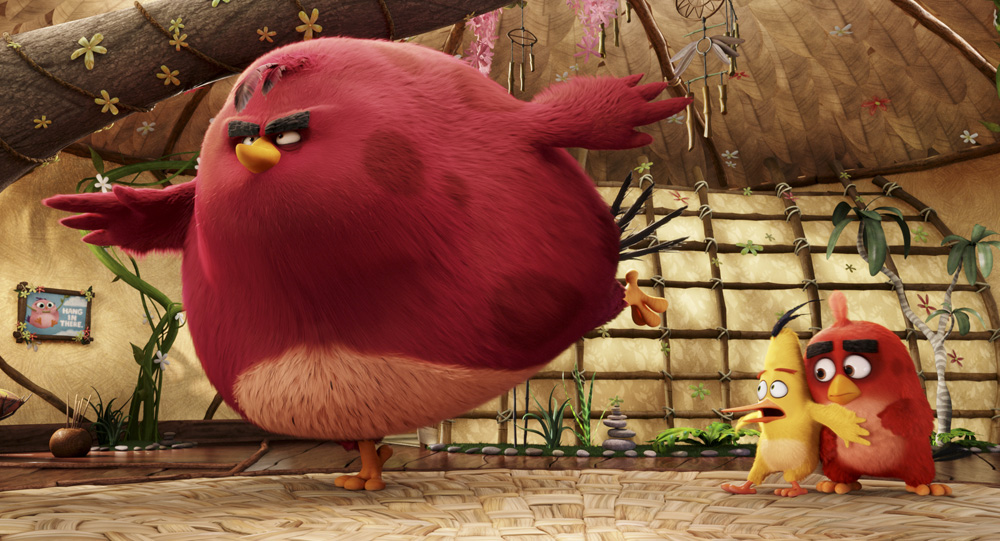 Even presented in standard-issue 3D – which is the equivalent of wearing your sunglasses at night – the colours in this film jump out at you. However for every filmmaking or storytelling flourish that hits a high note, there’s another that bombs. The film succeeds in spades when its firing on all cylinders, but it’s too haphazardly slapped together to stand as a timeless classic in the family vaults. 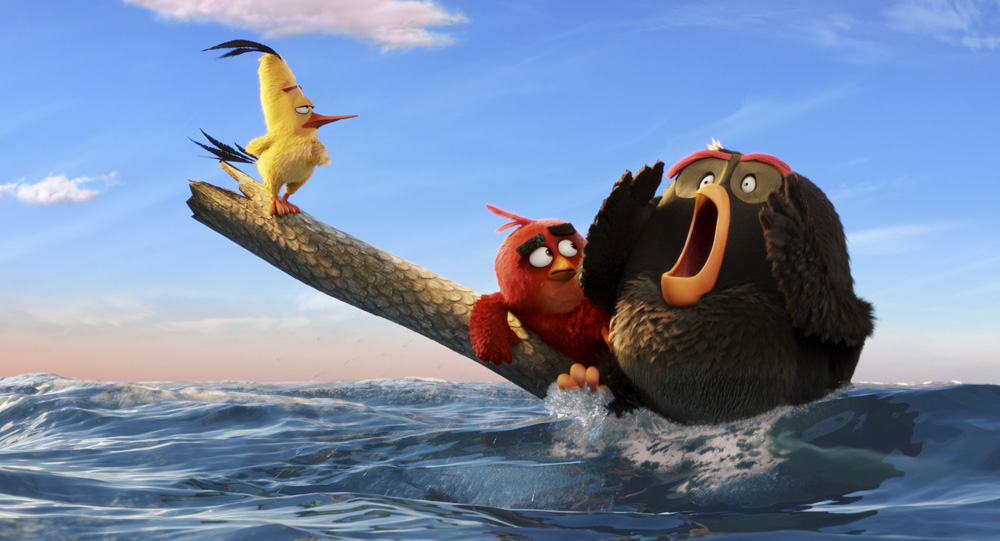 You should be able to have discussions with your kids about their takeaways after the hyperactive credits have faded. Plus, the exuberant animation and top-shelf voice talent will hopefully make it somewhat enjoyably distracting enough for adults. The film’s sense of humour does hit a few more blue notes than one would expect, which might make the kids giggle while their parents raise eyebrows. For a PG-rated film based on a smartphone game about a battle between pigs and birds there are a surprisingly large number of testicle jokes in the film.

Cynics in the audience won’t bite at even the tastiest worm to be dug up within The Angry Birds Movie. This movie isn’t made for the cold-blooded. And ultimately, the film itself boils down to a mandated belief in the power of community, which includes accepting everyone – faults and all. It’s an honest message in a sugarcoated shell, but whatever helps the medicine go down can’t be all that bad as long as it’s not a placebo, right? There’s no such thing as too much hope and optimism in an increasingly dour world, and The Angry Birds Movie does a serviceable job of brightening up anyone’s day.

Three eggs out of five!