Barely two months ago, the world wasn’t even aware of 10 Cloverfield Lane’s existence. The movie’s cast wasn’t even aware of the fact they were starring in a “blood relative” follow-up to the movie that really established producer J.J. Abrams’ reputation for secrecy. J.J., as we all know, likes to hype up the “mystery” of each of his projects but sometimes fails to deliver the goods.

So what’s the connection to 2008’s Cloverfield? Is there even any relation, or is this another “Abrams Fast One” he’s trying to pull on us? That’s up to you to discover, as I won’t even consider dipping my toe into “spoiler” territory.

I’ll say this, though: the buzzword Cloverfield isn’t in the title because it’s got a nice ring to it. But you know what? Those questions about where and how the film fits in with its namesake don’t matter. At least, they shouldn’t matter. For 90% of its runtime, 10 Cloverfield Lane excels as a tense psychological thriller in its own right. 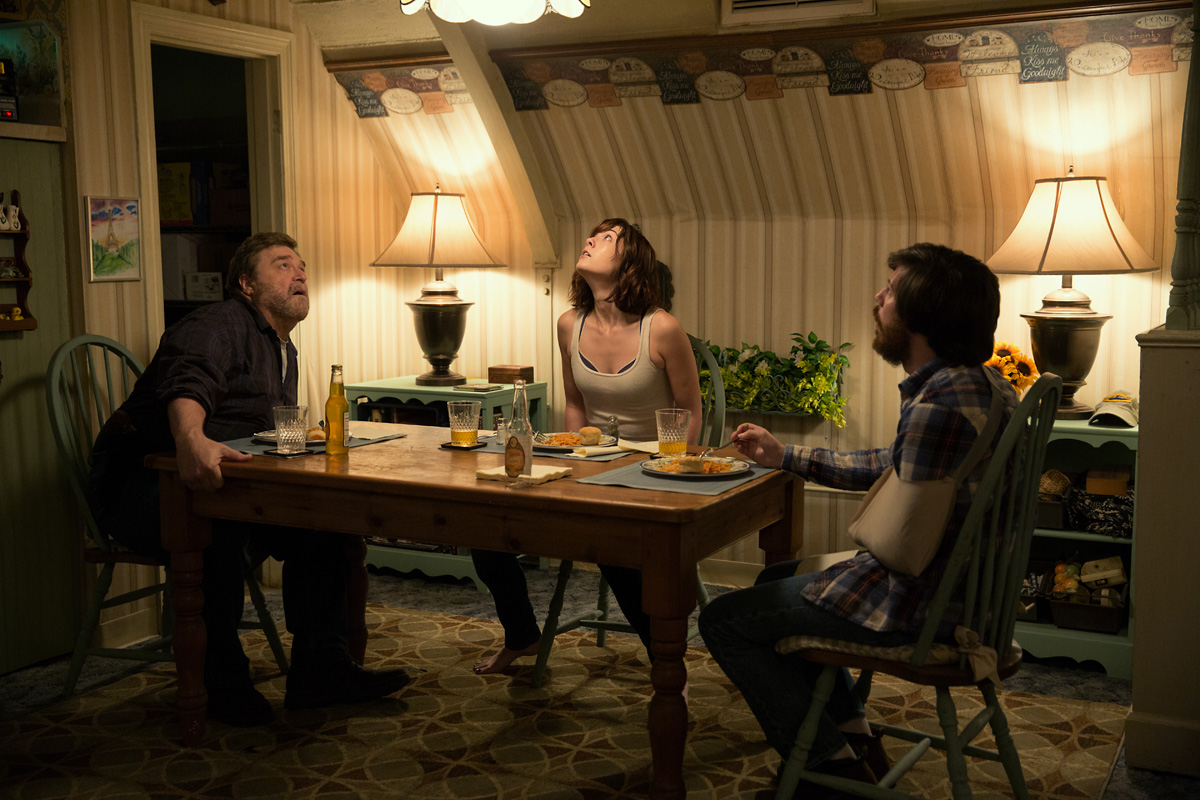 If the film were called 10 Mulberry Lane (or something) then it wouldn’t carry the baggage of audience expectation. But then again, that same audience might not show up in the first place without the name brand recognition. The Cloverfield tie is less motivated by story than it is a calculated marketing move. Those familiar with Abrams and his Bad Robot crew will no doubt have their eyes darting around the screen on the search for Easter eggs. Wisely, the filmmakers largely keep their mythology in check and let the actors carry what is in fact a terrifically entertaining movie. 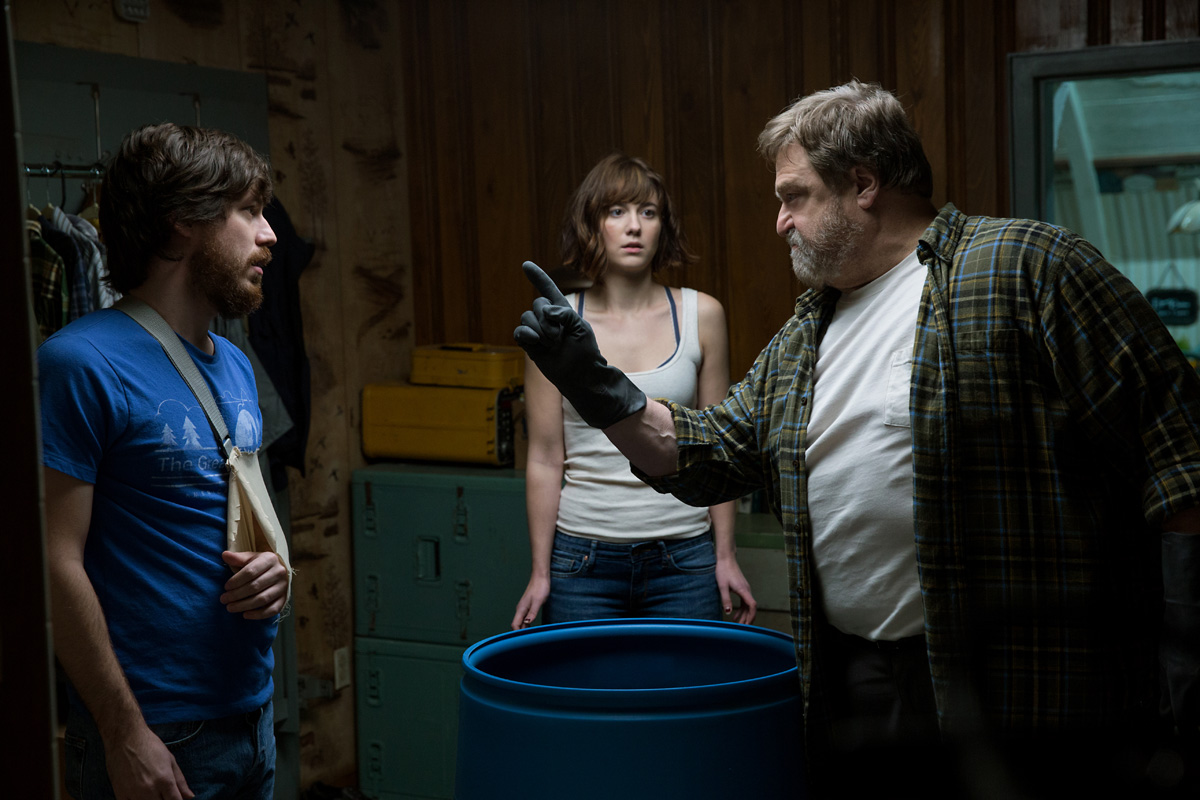 Michelle (Mary Elizabeth Winstead) is involved in a car accident on a late night highway. She awakens in an underground bunker, chained to the pipes by a man named Howard (John Goodman). Howard claims to have saved Michelle’s life from an attack above ground that could involve lethal nuclear fallout. Howard’s motives, and his sanity, are questionable.

The bunker’s third inhabitant, Emmett (John Gallagher Jr.) is seemingly closer to normal than Howard is. Emmett and Michelle bond while Howard maintains a conspicuously cryptic appearance and erupts in moments of violence and anger that just as easily give way to kindness and humour. As days trapped together go by, the volatility increases. 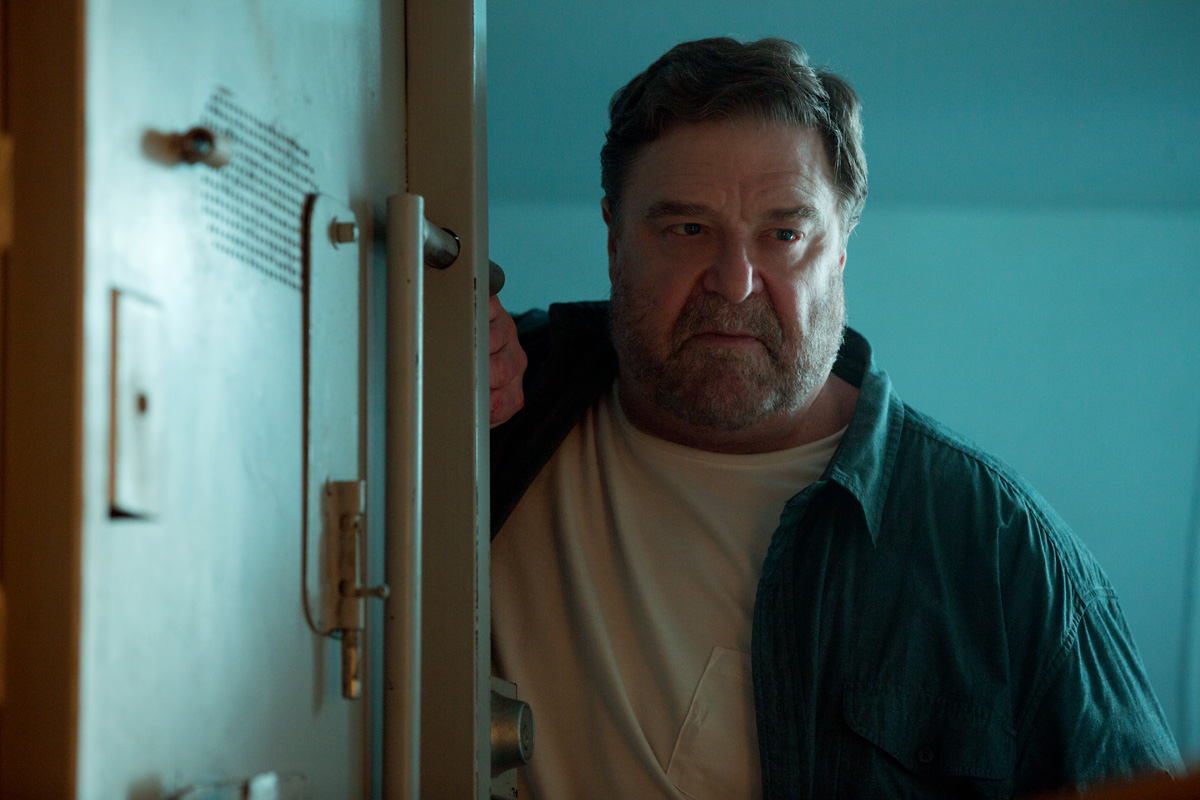 The extremes of Howard’s moods are unpredictable in every way, and Goodman does a stellar job in a role that could potentially have veered into caricature. As the heroine of the film, Winstead proves yet again that she’s a commanding leading lady who’s strong, smart, and delightful to spend time with.

The cinematography helps the fateful bunker feel like an actual defined space we’re easily familiar with. Sound is notably on point here, and the quality of its finely calibrated big-screen mix has a sensational effect on one’s viewing experience. For a film as claustrophobic as 10 Cloverfield Lane is, it makes full use of its technical scope and feels “big” in all the appropriate spots. 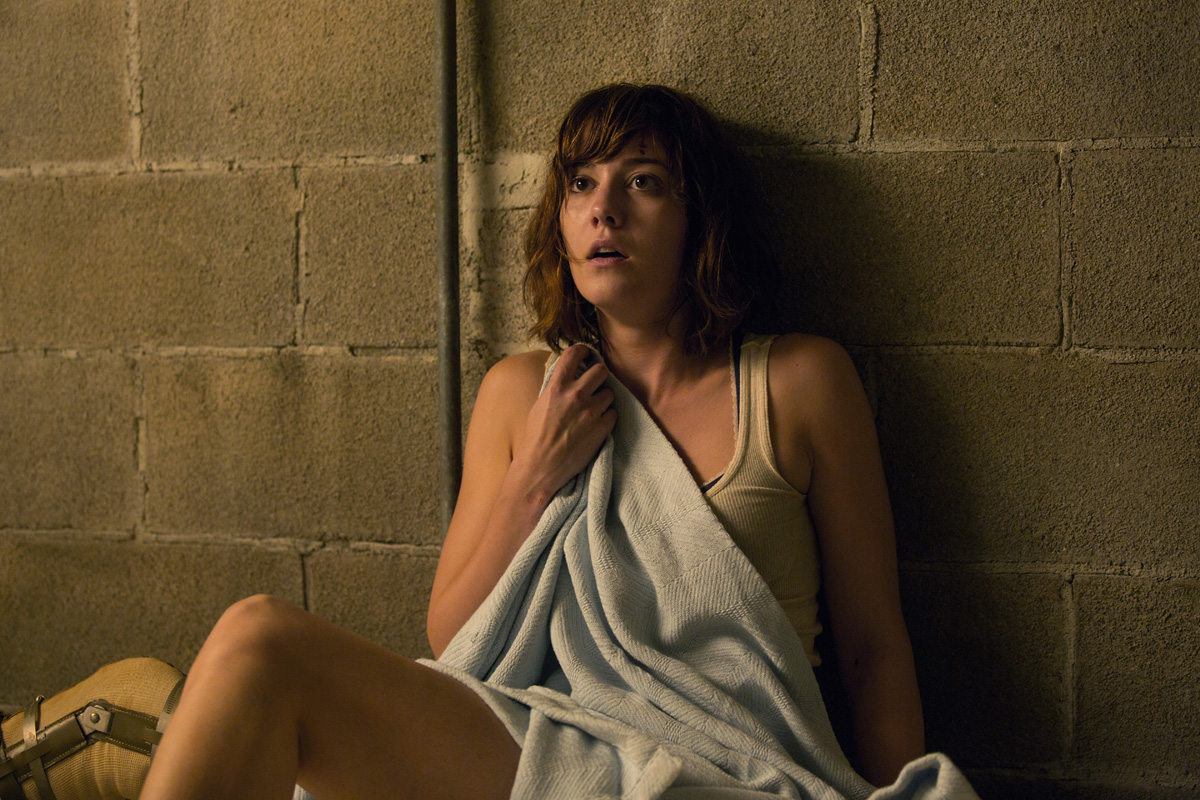 This is director Dan Trachtenberg’s first feature and he showcases a remarkable knack for rooting out tension in every scene. It’s to his credit that the biggest questions in 10 Cloverfield Lane – or at least the most interesting ones – have nothing to do with the outside world.

The characters and their bunker setting are strong enough that the audience is only concerned with these three people we’ve gotten to know so intimately. It reminded me at times of Abrams’ hit TV project Lost and the show’s divisive second season; the absolute best parts were the episodes spent with Desmond in the hatch and the insane nonsense above ground wasn’t that exciting in the end. 10 Cloverfield Lane isn’t quite “Desmond in the hatch” great but it at times reaches comparable heights. 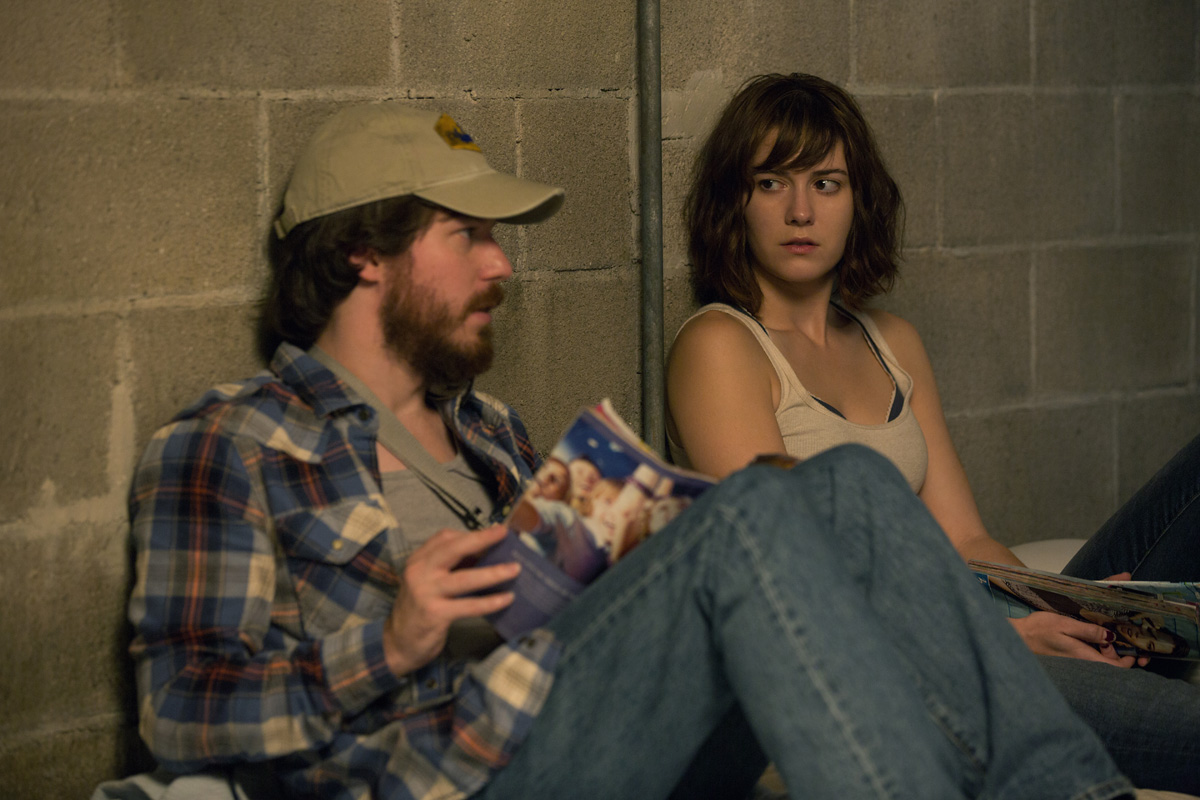 10 Cloverfield Lane originated as a script called The Cellar that was later retrofitted to wedge itself into the Cloverfield-verse. Was anyone really clamouring for an expanded universe continuation of Cloverfield, an over-hyped disappointment with a headache-inducing found footage aesthetic? When the first movie premiered in 2008 it was riding a wave created by a savvy marketing team and launched with an at-the-time record January debut. Once the first three days ended, however, large-spread disgruntlement absolutely capped the film at the knees and it barely cashed in twice its opening weekend, which is incontestable evidence of poor word-of-mouth among mainstream moviegoers.

10 Cloverfield Lane transcends everything about the first movie and establishes itself with a unique voice. The screenplay is funny, scary, and filled with character moments that are never superfluous. It just unfortunately has to pay its dues to the expectations that Cloverfield carried with it. 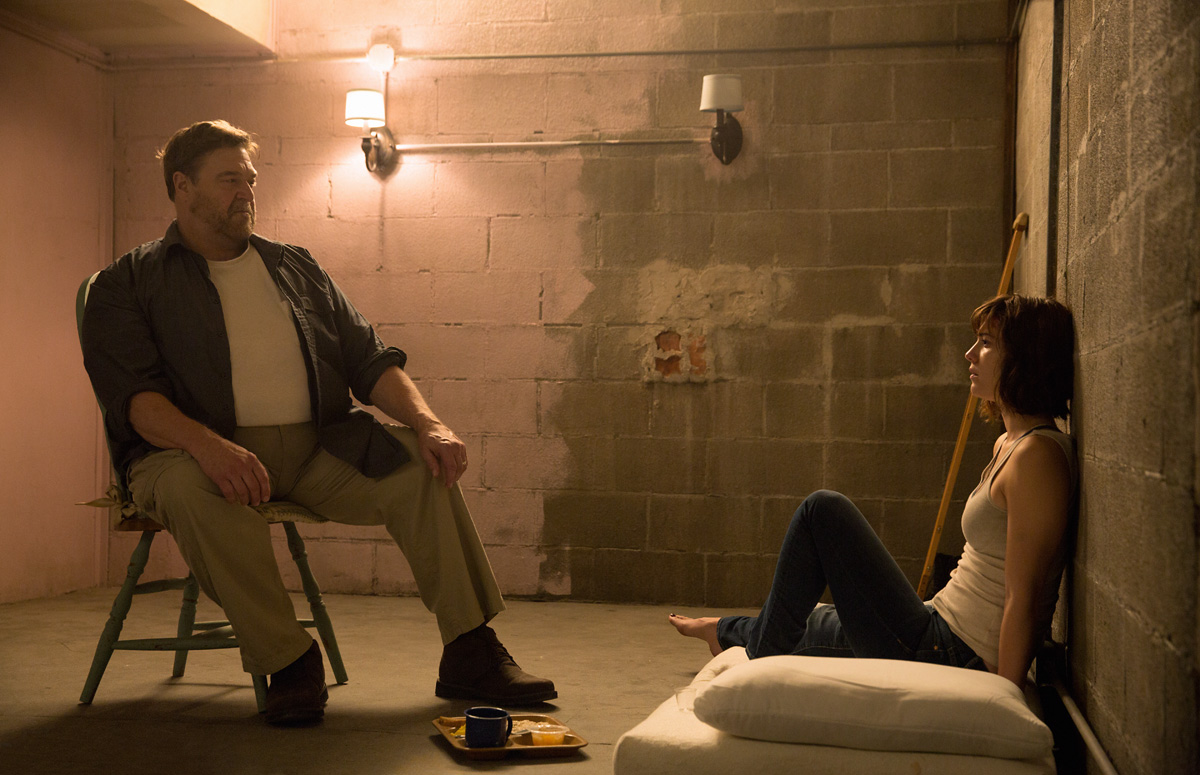 I really wish the movie stayed truer to itself in the final act, and it’s a shame that three engrossing characters and a rich premise had to be ever-so-slightly soiled by being forced into a sudden franchise they really didn’t need to be a part of. And truthfully, I personally enjoyed those specific things that I felt were unnecessary because I’m just a fan of that type of stuff. But if positioning the film as a “quasi-sequel/spin-off” means the film gets a wide release and an influx of money in its P&A budget then so be it.