Chappie was one of many films of 2015 that people were looking forward to seeing. Writer and director Neill Blomkamp gave us Oscar nominated District 9 but followed that up with the visually stimulating but ultimately flat Elysium. Blomkamp’s third attempt at a sci-fi masterpiece turns out to be as stolen and recycled as Chappie’s robot parts.

The film stars Sharlto Copley, Dev Patel, Ninja, Yolandi Visser, Hugh Jackman, Jose Pablo Cantillo and Sigourney Weaver. It’s rated 14A and not suitable for kids. The setting is back in Johannesburg where a lawless metropolis is patrolled by robot cops called “scouts” who are mindless enforcers that are a cheaper alternative to human cops.

The nerdy inventor Deon Wilson (Slumdog Millionaire’s Dev Patel), who built the scouts for a weapons company called Tetravaal Robotics, wants to download artificial intelligence into his bots that is on par with human consciousness.

Unfortunately, Tetravall Robotics CEO Michelle Bradley (Weaver) doesn’t see the value in thinking and feeling droids. So what does Wilson do? He steals one of the broken scouts that was on its way to the scrap heap.

A lot of this film seems to be re-hashed story lines from robot films of the ’80s like Short Circuit, Terminator and Robocop. There are even hints of Pixar’s Wall-E in this.

The robot Chappie comes to life with a consciousness of a toddler, so he becomes susceptible to the environment around him including some shady adults.

Some morons for criminals, played by Ninja and Yo-Landi (the actors and the criminals share the same names) of the South African Rap/Electronica group Die Antwoord, decide they are going to kidnap both Wilson and his new baby robot. In case you haven’t heard of Die Antwoord here is one of their catchy songs.

Yo-Landi becomes Chappie’s “mommy” and goes from ruthless punk to nurturing mother while Ninja becomes the “daddy” who decides that Chappie’s first lesson will be how to hold a gun and be “Robot Gangster Number One.” If they can get Chappie to be a cold blooded killer, they can steal twenty-million dollars in a big heist.

Hugh Jackman plays a rival robot-maker who happens to be a former soldier. He’s pushing for a bigger and more lethal version of a mechanized police force. So the last thing he wants are the Scouts or Chappie to succeed. In his mind there is no reason to give robots A.I. when they could be controlled by human brain waves. To be honest his idea seemed like a more logical approach and probably the best way to go about robotic warfare in the future…but I digress.

As the film rolls along Chappie is faced with a moral dilemma that had the potential to give the film true heart, but Blomkamp really botched it up. Not only that, there were opportunities to add more humour to the film. There is nothing better than seeing a child-like robot learn about the world around him. Once again, I kept hearing “Number Five is Alive” echoing through my head. If you are too young to understand what I’m talking about, here is the trailer for Short Circuit.

What we got was a lot of Ninja and Yo-Landi who might be talented on the mic but can’t act their way out of a wet paper bag even if they were trying to be exaggerated versions of themselves. That baffled me because you have Hugh Jackman and Sigourney Weaver in this film but their roles are limited and take a back seat for majority of the movie.

Chappie had so much potential. The special effects were cool but it’s a shame that the actors were more robotic than the actual robot. What made District 9 so great was the social concerns that were ingrained into the story. This film tried to have a message but I have yet to see a movie that hits all the right notes when it comes to dealing with consciousness. Maybe it’s just best we leave the complicated world of Quantum Mechanics alone. 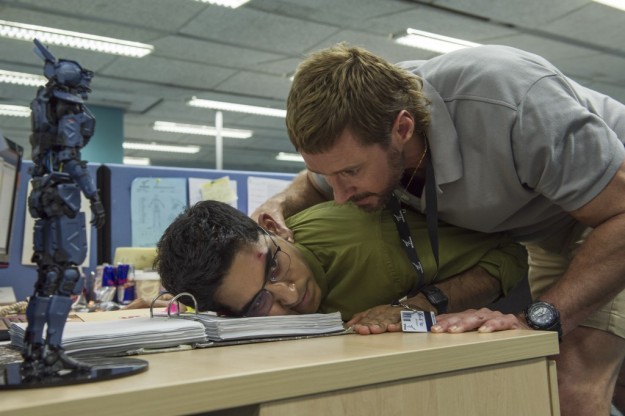 Neil Blomkamp has some great ideas but his execution is way off. The man does have some vision but he needs to get back to basics. Maybe being behind a new Aliens film will help the director/writer get back to his roots of solid storytelling, or maybe we are in trouble.

Overall the film dragged but it did have some fun moments – who doesn’t like a little robot-mech violence from time-to-time? I decided to let my friend and host of the Toddcast Podcast Todd Hancock throw out the rating score on this one and he gave it a 3 out of 5 raindrops. I would have to agree. Don’t waste seeing this in theatre, wait until you can rent it at home. Save yourself the money.