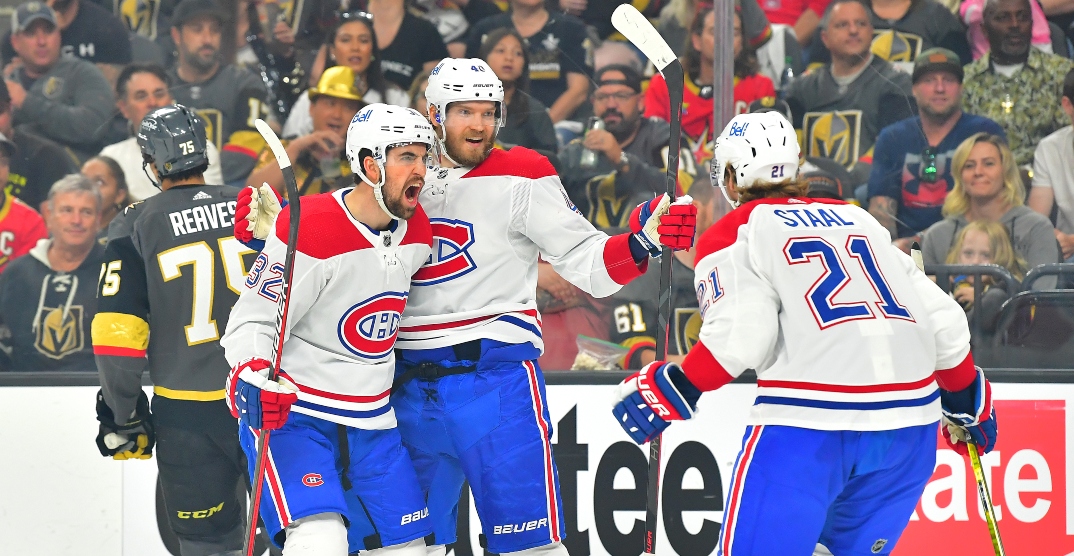 It will be a happy flight home for the Montreal Canadiens. They evened up their Stanley Cup semi-final series against the Vegas Golden Knights with a 3-2 win in Game 2 on Wednesday, earning a split in the series’ first two games in Las Vegas.

The Canadiens came out strong to start the game, outshooting the Golden Knights 12-4 in the first period and leading 2-0 at the end of it on goals by Joel Armia and Tyler Toffoli. Late in the second period, Paul Byron extended the lead to 3-0 on a breakaway, scoring his first goal since Montreal’s first game of the playoffs.

Alex Pietrangelo responded before the end of the period to get Vegas on the board, then scored again late in the third period, but Montreal was able to hang on for the win.

Armia got it for them just over six minutes into the game.

Armia’s fifth goal of the playoffs briefly gave him sole possession of the team lead, until Toffoli scored his fifth of the postseason later in the period.

In addition to Toffoli extending his point streak to eight games, Cole Caufield extended his point streak to four with an assist. Jeff Petry also picked up a helper on the goal in his return to the lineup. Petry had been out since suffering a hand injury in Game 3 of Montreal’s second-round series against the Winnipeg Jets.

Byron’s goal late in the second period looked like it might get the Habs to the second intermission with a three-goal lead, until Pietrangelo snuck a shot through a screen that beat Carey Price.

Pietrangelo struck again with just over five minutes remaining in the third.

THE GOLDEN KNIGHTS ARE WITHIN ONE!

The second of the game for Alex Pietrangelo. #VegasBorn pic.twitter.com/2ZZMZEtsOs

Five of the six goals the Knights have scored in this series have been scored by defencemen, and four of them — including both in this game — were the direct result of the Canadiens losing a faceoff in their own zone.

That goal officially made this game a nail-biter for Habs fans, but they were able to survive a late push by the Golden Knights and hold on for the victory. Price finished with 29 saves on the night.

Game 3 goes Friday at Bell Centre in Montreal at 8 pm ET/5 pm PT. Having been allowed to have 2,500 fans since Game 6 of their first-round series against the Toronto Maple Leafs, the Habs are going to be allowed to increase capacity to 3,500. After Montreal became the first Canadian team to play in the United States this year, Vegas is going to become the first American team to play in Canada.