When you think Molson, the first thing that comes to most people’s minds is Molson Canadian, a beer that practically defines Canadian beer. In recent years, large scale breweries like Molson have seen a big hit in their market share due to the meteoric interest in craft beer. So Molson is bringing out something new, by digging up something very old.

The brewery is introducing the John H.R. Molson and Bros. 1908 Historic Pale Ale, a beer derived deep from the company’s archives. Molson has tried to replicate the exact recipe, all the way down from working with an original yeast strain.

“To try and replicate the flavours and nuances of the early twentieth century recipe, we went deep into the archives to uncover every last detail behind this historic brew,” Keith Armstrong, Brewmaster at Molson Coors Canada said in a news release.

“We sat down with malsters, barley and hops breeders from across the globe to identify the correct ingredients to mix with Molson’s ancient ale yeast derived from the same primordial strand John Molson used in the 1700’s.”

During the brewing process, the density and temperature measurements had to be recorded every few hours to ensure consistency. The recipe is one of the many historic documents found in approximately 400 cartons of Molson archives.

Molson is clearly putting a lot of effort into making this beer as authentic as possible, so the question is: Is it actually worth it? 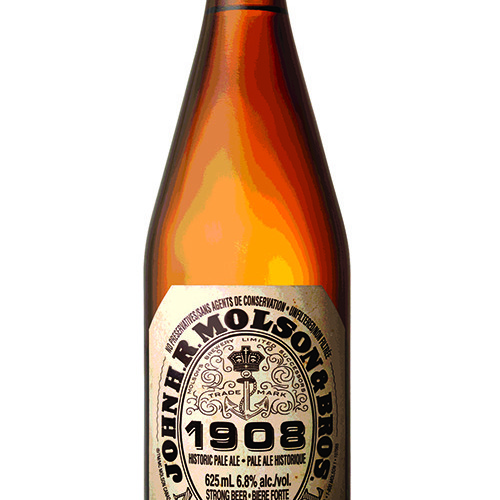 The beer pours a nice copper colour and gives off a nice malty aroma. As for the taste, there is definitely hints of what you would expect from a Canadian beer, but it’s more complex than that. There is a strong malt taste with a hint of hops that actually balances nicely. The brewmasters have, I think, captured what Molson was offering over a hundred years ago, and that in itself is a least worth a try.

Overall it’s an interesting beer, and an interesting direction for Molson. If they continue to dig into their past and reproduce some quality recipes from their history, this could be an experiment worth watching. Will it cut into craft beer’s success? No, but it might just earn Molson a little more credit, and give drinkers something to talk about.

You can find John H.R Molson and Bros. 1908 Historic Pale Ale in 625ml and 341ml bottles wherever beer is sold, if you want to do your own taste test.