UPDATE: It now appears the campaign has been shut down.

After being accused of running a “makeshift nightclub,” hosting multiple parties, being arrested, and filing a police complaint for damaging his peephole, a GoFundMe campaign titled “Reclaim your Rights” was launched to pay the legal fees for the owner of a $3 million penthouse in downtown Vancouver.

It comes after Mo Movassaghi’s arrest for allegedly hosting a party with 78 maskless people inside his 1,100-square-foot apartment. VPD say it appeared to be running as a nightclub and show lounge.

Movassaghi maintains that “there was no reported noise complaint or disturbance to my neighbours” and that to date, “there has been no reported covid case” associated with the party. 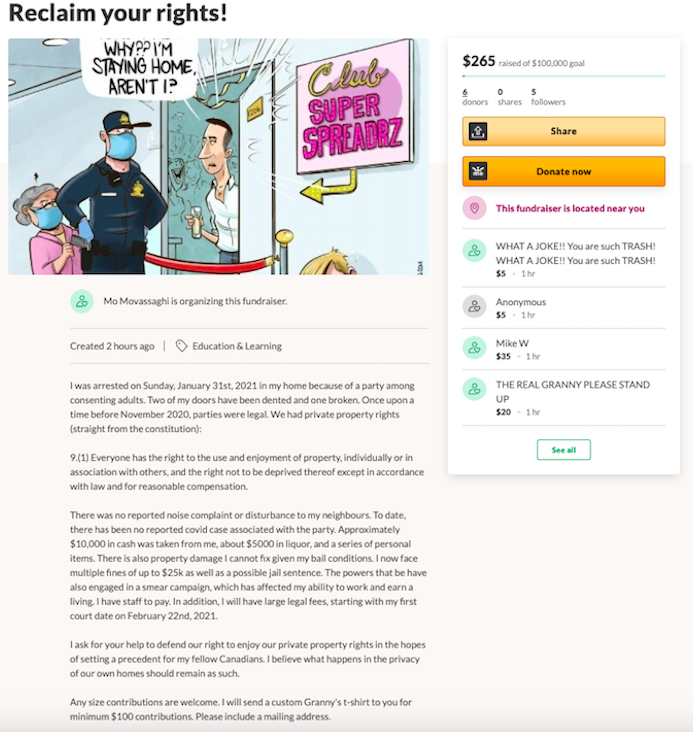 It also says there is property damage that cannot be fixed based on the owner’s bail conditions.

“I now face multiple fines of up to $25k as well as a possible jail sentence. The powers that be have also engaged in a smear campaign, which has affected my ability to work and earn a living. I have staff to pay. In addition, I will have large legal fees, starting with my first court date on February 22nd, 2021,” the fundraiser states.

The GoFundMe states that Mo Movassaghi was asking for public help to “defend our right to enjoy our private property rights in the hopes of setting a precedent for my fellow Canadians. I believe what happens in the privacy of our own homes should remain as such.”

None of the allegations against Movassaghi have been proven in court.

Daily Hive has reached out to Movassaghi for comment and will update the story when new information is available.