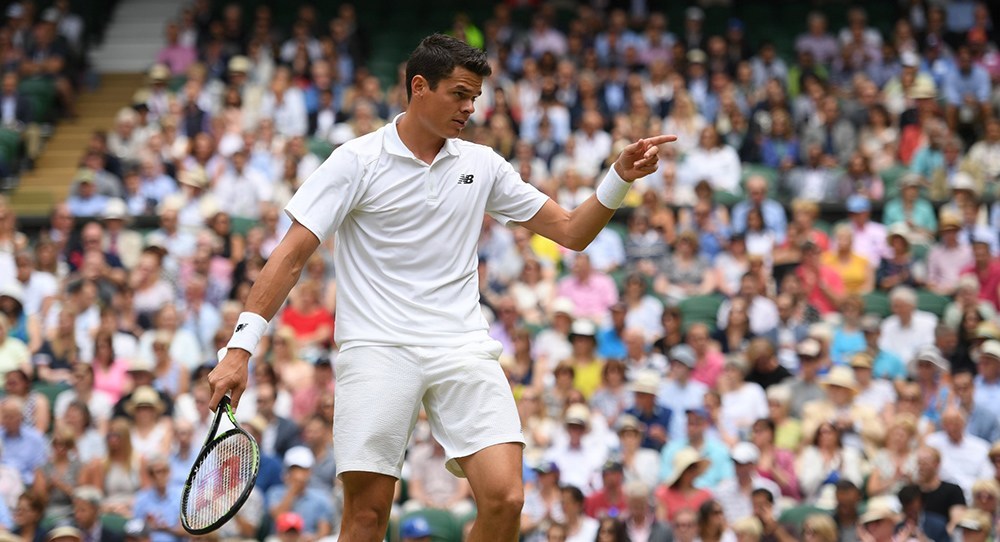 Milos Raonic has a chance to do something no other Canadian has ever done on Sunday: win a Grand Slam title.

Raonic is in the final of the most prestigious tennis tournament in the world after an incredible tournament that has included winning a match after being down 2-0 in sets, and beating arguably the greatest player of all-time on his favourite court.

Going into Sunday’s final, this will be the most important tennis match in Canadian history.

And Milos knows it.

Following his big win against Roger Federer on Friday, Raonic answered a question about what his win would mean to his country: “Well you know, it’ll have a bigger impact if I can win.”

“It’s an incredible feeling, to come back in a match against one of the greatest of all-time and give myself this opportunity,” Raonic told TSN’s Mark Masters after the match. “It’s what I’ve worked so hard for, it’s coming together and it’s by no means done. I have a tough task ahead of me, and I’m already with my eye-line on it to try to make the most of this opportunity.”

Beating Federer in the semis is huge right now, but it won’t live on in Canadian sports folklore if he doesn’t complete the job on Sunday.

This is already the golden age of Canadian tennis of course, with Milos Raonic ranked #7 in the world, Vasek Pospisil #44, and Eugenie Bouchard reaching new heights in 2014.

Tennis used to be a sport that only other countries excelled at.

Sure, Greg Rusedski reached a Grand Slam final in 1997 and was ranked as high as #4 in the world, but he did that after leaving Canada and deciding to represent Great Britain. He doesn’t count.

Daniel Nestor had a knack of finding a way to upset top players every so often, as he did to world #1 Stefan Edberg in 1992.

If you just said “who?” to those names, you’re not alone.

Eugenie Bouchard, of course, had a remarkable year in 2014 when she was ranked #5 in the world and reached the semi-finals at the Australian Open, French Open, and the final at Wimbledon. She was destined for superstardom and may still get there, but Bouchard has dropped as fast as she rose, and is now #48 in the world.

Raonic is already the greatest Canadian tennis player of all-time, and he’s trying to win a Grand Slam in perhaps the toughest era to do it. Djokovic, Federer, Nadal, Murray… This is not an easy time to win your first major.

With Djokovic – the current title holder of all four majors and a player who Raonic has never beaten – out of the way, at 25-years-old, Raonic looks poised to do it.

Raonic is a different player than he used to be.

Milos is no longer a one-trick pony. Sure, his serve is still his best weapon, but now he can beat you in other ways.

By all accounts, his mental game has improved as well.

Raonic: “John [McEnroe] gave me plenty of nuggets that helped today. So did Carlos [Moya]. I hope they have a lot more to give me”

“Raonic played with an intensity and energy, he found that second wind he really needed,” John McEnroe, who began working with Raonic this year, said following his match on Friday. “I think [Federer] was a little surprised that Raonic was able to lift his level when it was really needed.”

Milos will have a tough test on Sunday against world #2 Andy Murray – a world class player playing some great tennis in his own right – and he may not win his first-ever Grand Slam on Sunday. But the way he is playing, this could be his best shot.