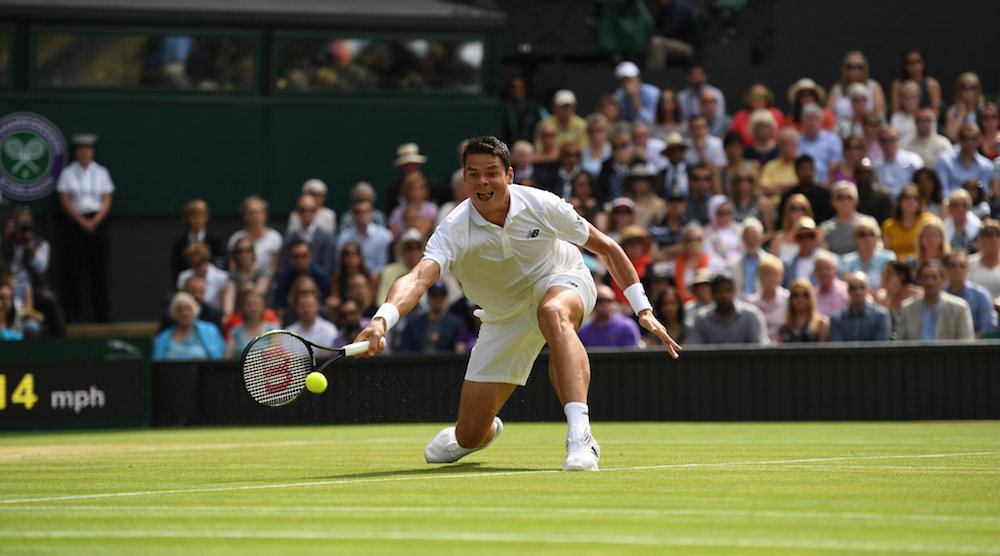 Milos Raonic has lost to Andy Murray in the final of Wimbledon.

The match was a master class by Murray, who won the match in straight sets 6-4, 7-6 (7-3), 7-6 (7-2). So on top of his game was Murray, that during the match ESPN commentator John McEnroe said he was playing the best tennis of his life.

It didn’t take long for Murray to show how dialed in he was. While Raonic fought off Murray’s first break-point chance at 1-1 in the first set, at 3-3 Raonic looked at a 15-40 scoreboard – two break chances for Murray.

Murray capitalized on the second, and the rest of the first set was a formality as he held his service games to win it.

To Raonic’s credit, he bounced back admirably in the second set as it had the potential to follow a very similar script. On serve at at 3-3, Murray once again had a break chance on Raonic’s serve.

Raonic fought off that point and held, only to concede another break point chance at 4-4. Again he pushed back and held, and the set would eventually go to a tiebreaker.

The Canadian appeared to tighten up as soon as the tiebreaker began, though. On the first point, Raonic netted a backhand volley he had plenty of time to hit. Up a mini-break, Murray never looked back, taking the tiebreaker 7-3.

The third set went the same way. Raonic had two break-point chances, won neither, and they went to another tiebreaker. Again Murray stepped up when it counted, returning Raonic’s biggest serves like they were wiffle balls. Murray won the tiebreaker 7-2 to take the match and the championship.

Canada can be proud.

It was a #Wimbledon to remember for Milos Raonic… https://t.co/c2Xl6lriXj

Canadians upset by the result should take heart in the fact many multiple Grand Slam holders lost in their first time in a final. Murray, in particular, lost his first four finals before finally winning the U.S. Open in 2012.

“I keep plugging away,” said Raonic, during his on-court interview after the match. “Every single day I try to get better to give myself these chances, and I’m going to be continuing to do the same because there’s nothing I want more than to be back here.”

Murray had complementary words for the Canadian as well: “He (Raonic) is one of the harder workers out there. Like he said, he’s always trying to improve and get better. Each time we play against he other, he’s made big improvements.”

Over the course of the match, Raonic held every service game but one. While Murray constantly applied pressure, Raonic held his nerves and found ways out of trouble.

The thing he did against Federer that he wasn’t able to replicate Sunday was win key points on his opponent’s serve. That will be the puzzle he has to solve if he wants to beat Murray and Novak Djokovic over the next few years.

The way he’s been improving the last two years, he’ll find a way.

At this rate, you have to believe it’s only a matter of time until Raonic scales the mountain and brings Canada a major trophy.