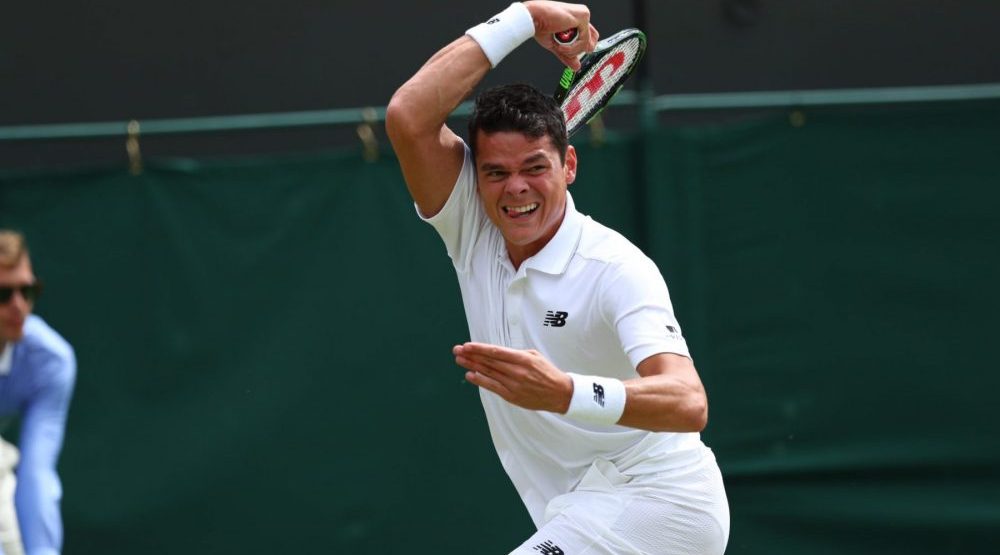 Down two sets to love in the round of 16 at Wimbledon, it looked like curtains for Milos Raonic.

After all, the big-serving Canadian had never come back to win a match in his career after dropping the first two sets. Until Monday.

The 25-year-old Canuck had his service broken for the first time in the tournament in the first set, and twice more in the second. The final point lost in the second set was on a double fault.

That would be the last time Goffin would break Raonic’s serve.

It looked dire for Milos, who appeared to be squandering a clear path to the semis after world #1 Novak Djokovic was upset in round 3.

Both Raonic, Goffin leave the court … chance for Milos to speak with Moya, McEnroe #Wimbledon

After a brief rain delay, Raonic channeled his inner-John McEnroe to put together perhaps his grittiest win yet.

Goffin opened the door for Raonic in the third game of the third set, double faulting twice and allowing Raonic to break his serve. Meanwhile, Raonic’s serve gained momentum. Milos didn’t lose a point on his last two service games in the third set. 2-1.

Raonic’s serve continued to sizzle in the fourth set, as he popped 7 aces. He broke Goffin in the fifth game of the set, setting up a fifth and decisive set. 2-2.

The two players replicated the fourth set in the fifth, as Goffin had his service broken in the fifth game yet again.

Raonic is now 7-5 in his career in matches decided in five sets.

The draw sets up very favourable for the 25-year-old, who will play Sam Querrey on Wednesday in the quarter-finals. Querrey, the 28th seed, is the man who beat Djokovic in the third round.

Should Raonic win that match, he should be on a collision course with Roger Federer in the semis.