Microsoft has revealed that it will be opening a retail store at Metropolis at Metrotown Shopping Centre very soon. This will be the third Canadian store after Toronto’s Yorkdale and the recently announced West Edmonton Mall location.

This isn’t the first indication that the software giant has been setting its eyes on the Vancouver retail market. A pop-up Microsoft kiosk at Metrotown has been open for quite some time as a means for the company to test out the Vancouver market for opening a large, full-fledged retail store selling Microsoft products – the Microsoft Store.

Hey Vancouver! The @MetropolisatMet in Burnaby is getting a new Microsoft retail store very soon!

According to the Microsoft Store’s website, the retail unit will be located on the ground level near the Grand Court of the mall. However, an anticipated opening date is currently unknown.

This is obviously Microsoft’s answer to the Apple Store and to date there are 73 such Microsoft Stores open around the world. Expect it to be your one-stop destination for PC products, Windows, Surface, Xbox, Windows Phone, and so much more within the world of Microsoft.

Meanwhile, an announcement on the location of a flagship Apple Store in downtown Vancouver (that will complement, not replace, the existing Pacific Centre retail unit) is expected to occur sometime this year. Several large and high-profile locations along Robson Street are being considered. 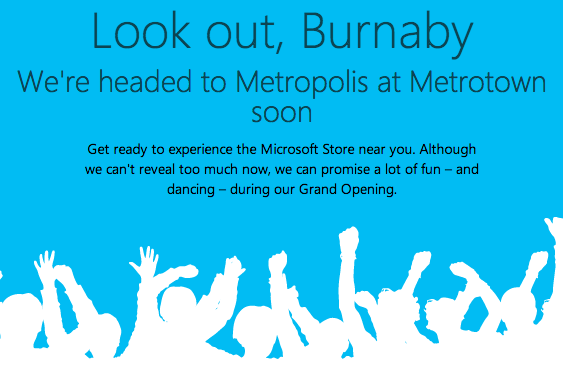