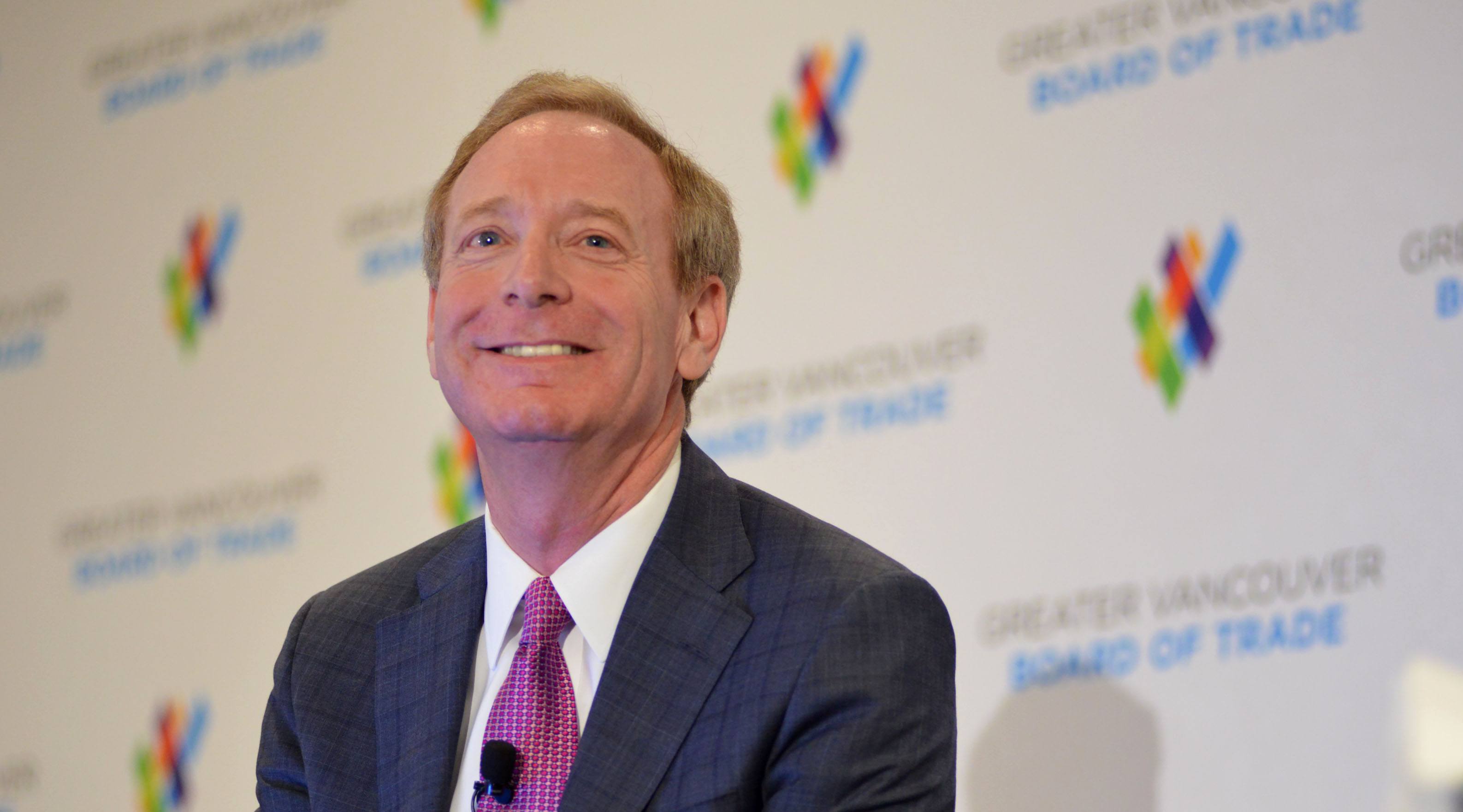 Microsoft President Brad Smith in Vancouver on June 28, 2017 (Greater Vancouver Board of Trade)

Smith was in Vancouver this week to give a keynote address to the Greater Vancouver Board of Trade on the Cascadia Innovation Corridor.

One year on, Smith addressed the progress made – and prospects for the future – of the tech dream that could eventually link Vancouver and Seattle.

Speaking to assembled business leaders on Wednesday, Smith described mixed reality tech, which overlays the real world with extra information, is just one “big bet” open to BC.

“I believe [the corridor] is a big dream worth pursuing, but like any big dream you don’t get there in a single step.”

“What you find is that [tech] ecosystems always turn on a few big bets,” said Smith. “One big bet for this area is mixed reality. This is a fundamental part of the future of computing.”

“It will transform gaming… The truth is it has the potential to transform so many fields, whether it’s the world of medicine, architecture, robotics, or manufacturing.”

Mixed reality could be $80-billion sector

Smith cited the local example of Finger Food Studios, which Daily Hive profiled ahead of the BC Tech Summit earlier this year.

The Coquitlam-based company is home to the biggest dedicated holographic design and development studio in the entire world.

The HoloDeck covers 25,000 square feet, and uses mixed reality to help companies see their products before they’re even built.

In just seven years, Finger Food Studios has catapulted from a basement startup, to a multi-million-dollar company, now on Microsoft’s preferred vendor list.

“They’re at the forefront of seeing how this can touch many areas of human life,” said Smith in his speech.

“Today this is a relatively small sector, by the year 2025 it’s estimated to be an $80 billion sector.”

Speaking to reporters in a roundtable after his keynote, Smith said the corridor project represented an opportunity for smaller and larger companies to work together.

“There’s no reason to think that our ideas at Microsoft are better than the ideas of a small company that was founded a year ago,” he said.

“To the contrary, there are probably some young entrepreneurs that have ideas that we haven’t thought of and we could learn a lot from hearing from them.”

Smith added there are students in university today that won’t be attracted to Microsoft, but will want to become part of a small, young company instead.

“It’s good for small companies to not only think about their good ideas, but their unique contributions,” he said. “There’s a valuable and critical place for them.”

‘I think we’re onto something’

Of course, this is a difficult time to be trying to build a cross-border project, given Trump’s travel ban and pledge to rip the NAFTA agreement up.

“I have an optimistic sense that at the end of the day, common sense tends to prevail,” he said, adding that he is lobbying officials on many aspects of the project. 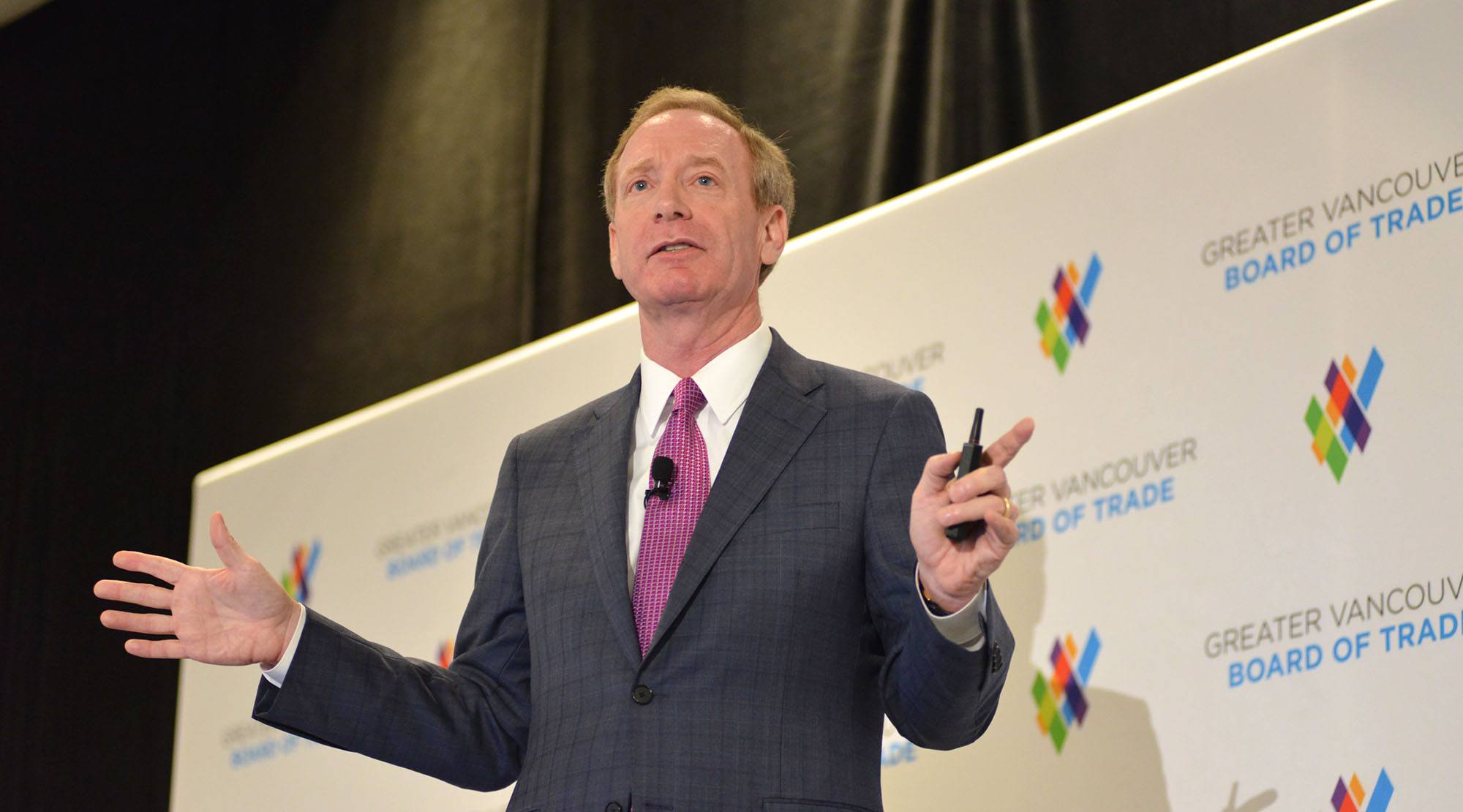 Microsoft President Brad Smith in Vancouver on June 28, 2017 (Greater Vancouver Board of Trade)

Ultimately, he said, companies in Seattle are keen to get on board, and Portland has been showing such an interest, he will soon be heading there for talks.

“I think we’re onto something. It’s not necessarily a new idea… but it’s an idea whose time has come.”

Ideas are one thing, but tangible change is what’s needed, of course. Smith said he’s already seeing companies operating in “truly vibrant ways” in both cities.

He’s also encouraged by “more collaboration among faculty and researchers at major universities, just because that tends to drive a lot more opportunities not only for research but also for students.”

Ultimately, he said, the growth of Vancouver and the Cascadia Innovation Corridor needs philanthropy, and must span more than one part of the economy, not just tech.

And then there’s the issue of transportation of course. Transiting from Vancouver to Seattle currently involves a complicated seaplane journey, or lengthy train ride.

“I think what people will really look at is, ‘Is it easier to get from one place to the other?'”

“Whether it’s high speed rail, or MagLev, or self-driving cars. We’re not that far apart…That part probably feels like the most distant dream to most people right now.”

Sometimes though, you just have to show a little willing.

Earlier in his keynote, which followed a lunch, Smith urged Vancouver’s business leaders to embrace the growing success of augmented reality and the potential of the corridor.

“Somebody said to me before the lunch began that it really isn’t part of the Canadian character to have moxy,” he said.

“Well as an American, let me just say, anytime you look at an escalator like that, and you have the opportunity to get on it, it’s not a bad time to have a little moxy.

“There is an opportunity here to get on a wave as it starts to grow.”

Listen to Microsoft President Brad Smith’s keynote speech at the Greater Vancouver Board of Trade in full, via Soundcloud, below: