Michael Bublé has apologized for upsetting fans earlier this week by posting an image to his Instagram account that some called fat-shaming and sexist.

Posted three days ago, Bublé took a picture of himself with his arms crossed, standing behind an anonymous woman.

“There was something about this photo lu took ,that seemed worthy of instagram,” Bublé wrote under the image. He then used the hashtags #myhumps #babygotback #hungryshorts #onlyinmiami #picoftheday #beautifulbum. 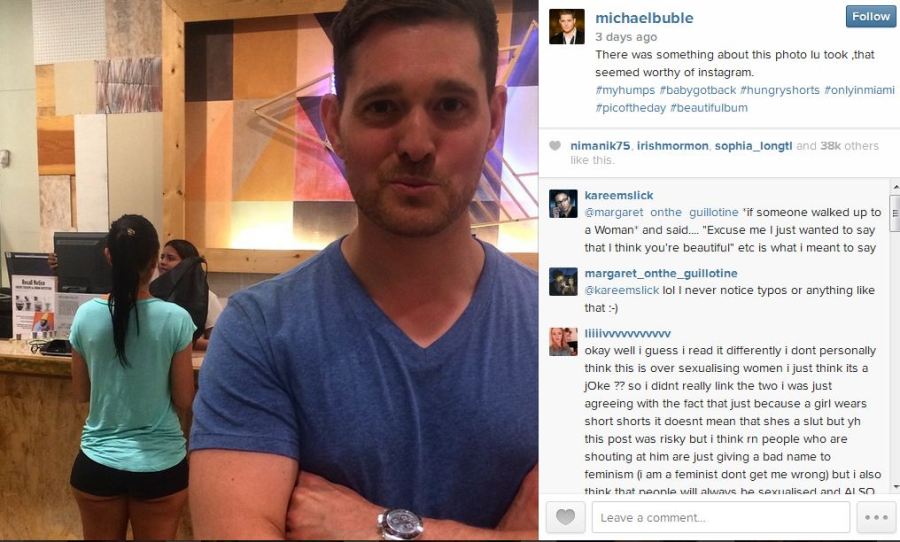 Followers of Bublé were quick to criticize the musician for making fun of the woman’s visible curves and perpetuating rape culture.

“Women are not objects. You are objectifying a girl without even asking for her consent. You are a terrible person, what the hell is wrong with you?” One commenter wrote.

“That girl’s ass, no matter how much is showing, is not for Michael to stare at and post pictures of. That’s a human’s body, not a circus show.”

But some of Bublé’s fans defended the singer, saying the woman knew she was wearing short shorts and should have expected people would take pictures.

“I am confused as to why so many people are upset over this picture. He is not body shaming her at all. He said #beautifulbum, people need to seriously lighten up.”

Bublé has now apologized through his Facebook page, saying “Anybody who knows me would never misinterpret the message of the photo my wife took in Miami that seems to have caused unexpected rage by some people.”

“I do not court controversy. But I realize that a photo that was meant to be complimentary and lighthearted has turned into a questionable issue. For the record, It hurts me deeply that anyone would think that I would disrespect women or be insulting to any human being.. I was not brought up that way and it is not in my character,” he said, adding: ” I regret that there are people out there who found the photo offensive. That was not and is not my intention. Women are to be celebrated, loved, respected, honored and revered. I’ve spent my life believing that and will continue to do so.”

The apology is attached to an image uploaded by Bublé. 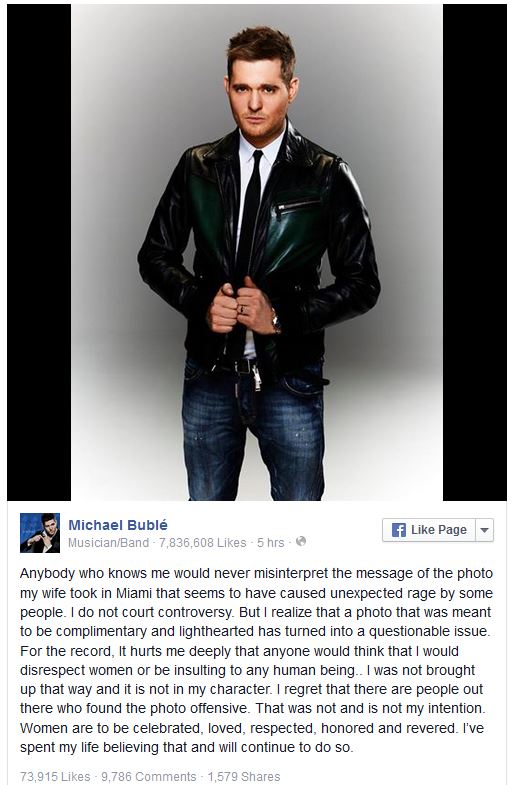