Voting in this plebiscite is through a mail-in ballot, with ballots arriving in mailboxes between now and March 27.

The ballot asks approximately 1.5 million eligible voters in the region whether they are in favour of adding a 0.5 per cent Congestion Improvement Tax (CST) to items and services that are taxable under the 7.0 per cent Provincial Sales Tax (PST).

The question on the ballot is as follows:

Do you support a new 0.5% Metro Vancouver Congestion Improvement Tax, to be dedicated to the Mayors’ Council transportation and transit plan?

If the new tax is approved (a simple majority of 50% + 1 is required), the provincial government will introduce the CST in 2016 to provide $250 million in new revenue on an annual basis to help cover the costs of the Mayors’ Council $7.5 billion plan to:

The tax is expected to cost households an average of $125 per year or about 35 cents a day. Proponents of the tax maintain that all funds raised will be managed by the provincial government, audited on an annual basis and spent only on the Mayors’ Council transportation plan.

A volunteer-based Public Accountability Committee, led by local businessman Jim Pattison, will also oversee the use of the funds.

Who is eligible to vote

In order to be eligible to vote in the Metro Vancouver Transit Plebiscite, you must:

I am a registered voter:

I did not receive my voting package by March 27 or I am not a registered voter:

How to submit your ballot:

Elections B.C. must receive your ballot no later than 8 p.m. on Friday, May 29. There are two options for ballot submission:

Beginning on April 1, Elections B.C. will report the number of interim ballots submitted on a weekly basis.

The counting and reporting of the plebiscite results will begin after the close of voting at 8 p.m. on Friday, May 29. The process of counting is expected to last several weeks.

Key arguments by proponents and opponents: 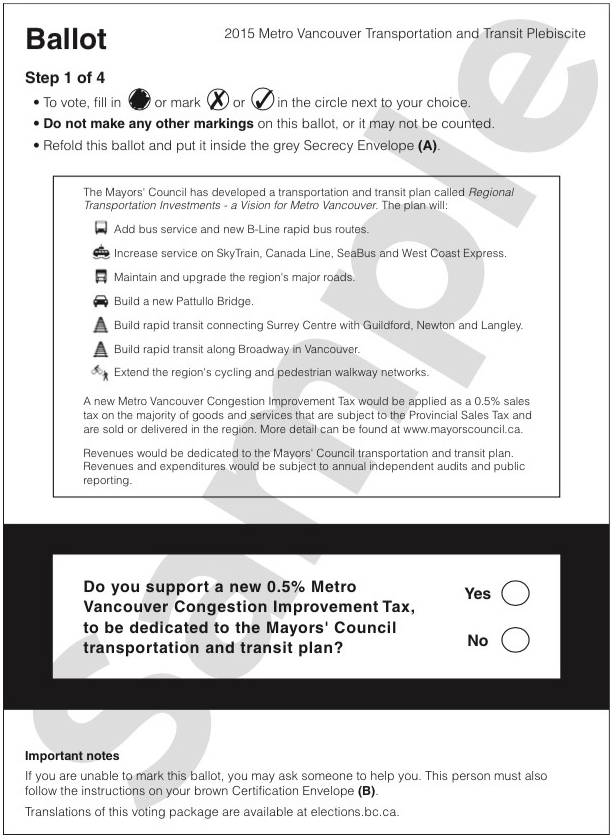