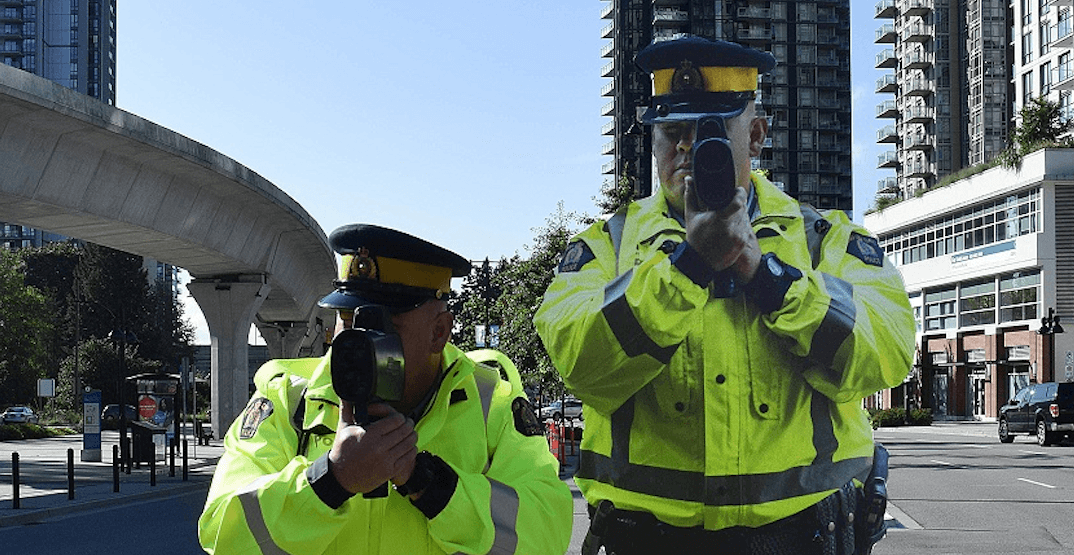 Can you tell which one is the metal cutout? (Coquitlam RCMP)

The Coquitlam RCMP say that by all accounts, the newest member of their traffic enforcement team has been a success – even though he has yet to hand out a single ticket.

“Constable Scarecrow’ is a life-sized, metal poster-board that features a police officer with a laser speed-reader, and for the past two months, he’s been part of a pilot project on the roads of Coquitlam and Port Coquitlam.

“We’ve seen this sort of idea used before in the United Kingdom, but we haven’t seen it used here in combination with scientific monitoring,” said Coquitlam RCMP Sgt. Quentin Frewing. “It’s a low-cost, good-humoured way to improve our presence and perhaps make people think twice about speeding.”

Now, the detachment is “rewarding” Const. Scarecrow by “extending his contract” for a job well-done at curbing speeders.

During his time “on duty,” RCMP officers have been monitoring his impact using the BlackCat speed-monitoring system and say that the tactic “has exceeded expectations and has slowed down speeding drivers more effectively than originally anticipated.”

According to Const. Michael McLaughlin, one of the biggest surprises was the fact that “even after two weeks in one spot, people were still slowing down in the presence of Constable Scarecrow.”

In fact, the number of drivers going more than 10 km/h over the speed limit was half that compared to before Constable Scarecrow was installed, he added.

“We’re glad to see Constable Scarecrow get so much respect, but we understand that not everyone is on his side,” said McLaughlin. “He’s a man of few words, and his more action-oriented colleagues are far more likely to write tickets for people who still choose to speed.”