Many Millennials in the Metro Vancouver region may have inflated expectations on how much money they will inherit from their parents.

A new report by Vancity Credit Union says 39 per cent of individuals of Millennials, between the ages of 18 and 34, expect an inheritance of over $300,000. But in reality, most will only receive one-third or less of that number from their parents – approximately 66 per cent of parents.

Just 12 per cent of parents will receive an inheritance of more than $300,000. Although mom and dad are generally house rich, with $157-billion worth of clear-title real estate in the region, this does not necessarily lead to a large inheritance.

“The skyrocketing value of property holdings in British Columbia, particularly in Metro Vancouver, promises to buoy estate values in the province, and the need for residents to make plans for their disposition,” reads the report. “Increased property values could lead to potentially larger inheritances for children.”

“However, as parents live longer and the cost of living continues to increase, some may look to utilize the high value of their homes and pull equity out of their properties to fund retirement.”

Part of the problem with unrealistic expectations might also have to do with whether parents engage in inheritance discussions with their children. The report found that less than half of parents spoke with their children on the matter, even though 92 per cent expect to leave something.

“It can be difficult for parents to talk their kids about their death, the state of their finances or any potential inheritances,” said Sophie Salcito, investment advisor at Vancity, in a statement. “But these are important conversations, especially if children have unrealistic expectations or aren’t taking responsibility for their own financial future.”

As well, senior parents now carry a higher debt load, meaning less of their assets can go towards their children’s inheritance. About 43 per cent of senior households in B.C. carried debt loads in 2012, up from 27.4 per cent in 1999. The number of seniors working in the B.C. workforce has also risen from 4.5 per cent in 2001 to about 12 per cent in 2015.

And of course, the rising cost of living and housing in Metro Vancouver is another major factor.

While inheritances may be lower than expected, 60 per cent of respondents told researchers that they already provided their children with a portion of their wealth to help cover student loans, debts, and costs for a house or a car.

Across B.C., the report found that 78 per cent of parents aged 65 or older have a media asset value of approximately $594,400 and have already drafted a will. 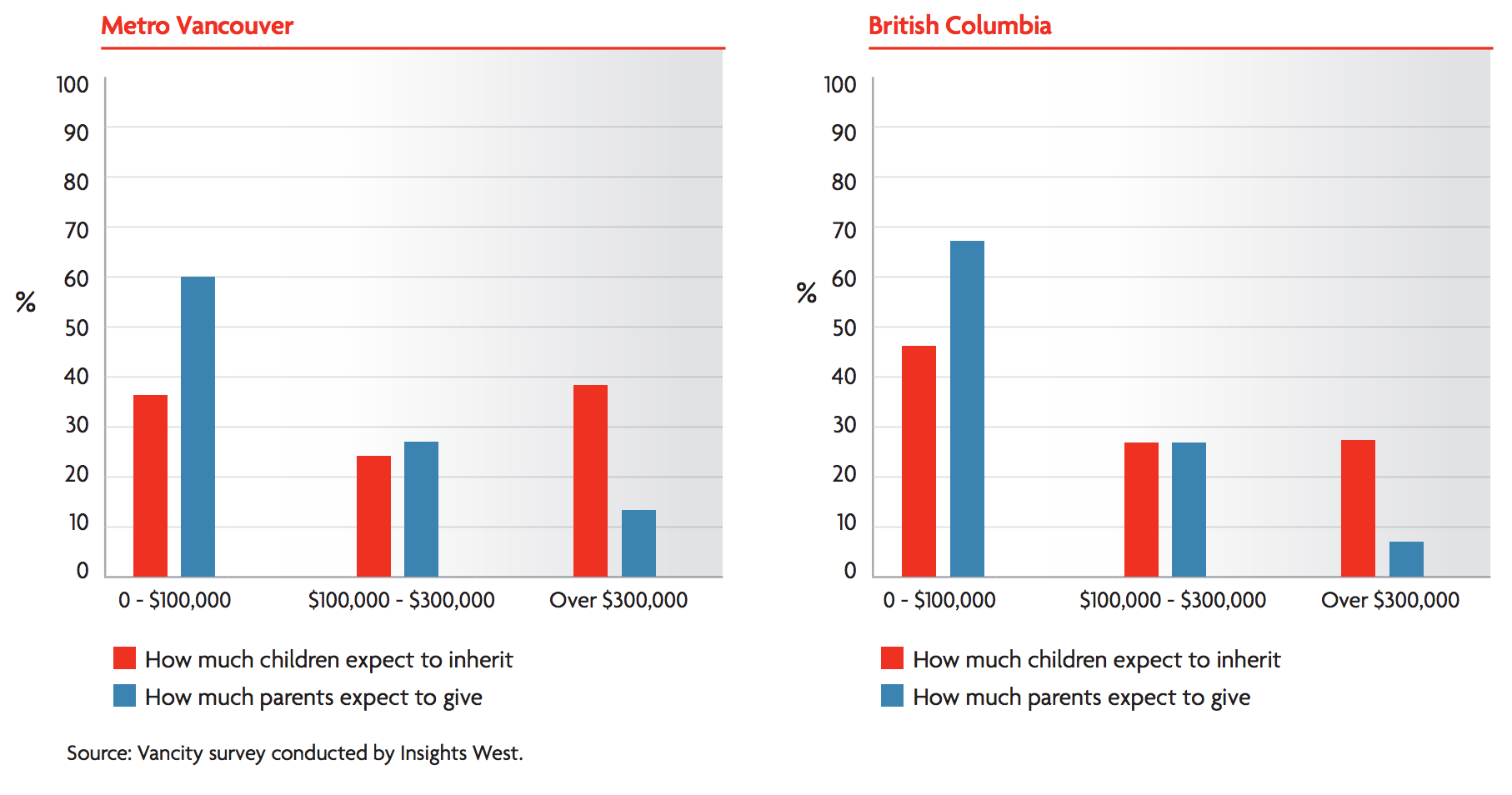