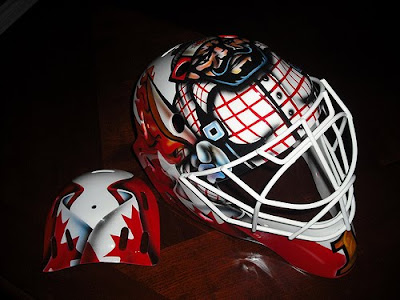 Update: According to Puck Daddy, Luongo is in tomorrow! [source]

After last nights game many Canadians were questioning whether or not Brodeur is the goalie to go with for the rest of the Olympics. Is it time to put Luongo in net? Does a passing of the guard, so to speak, need to take place? Tell us what you think by taking our our poll (see right side bar).
If you ask me, Luongo should have started the second period or at the very least the third. Although Brodeur was not at fault for the first goal, his presence in the net just wasn’t there and he should have had the other three. He just didn’t look comfortable in net and although he got the victory over Switzerland, he was a little shaky in that one as well. This is not to bash Brodeur as the team in front of him is not playing hard nosed Canadian Hockey, save for a few players, the determination and will was just not there throughout the game.  Also, what’s with Babcock not taking a timeout in the third period?

If this team is going to medal, forget about gold for a second, if this team is to get a medal of any sorts, they better start playing like a team. Switzerland should have been their wake up call and well, it wasn’t. Focus on Germany, don’t think about Russia and get your game face on!

As for Marty, thanks for the memories and awesome goaltending in the past, but it’s now time to give Luongo a shot. 4 goals on 23 shots will not cut it and I’m with the hoards of fans chanting “Luuuu” on Granville last night, it’s Luongo’s turn to carry this team.