The last few weeks and months have been a turbulent time for the mayors of Canada’s three largest cities… well actually, all except one.

In case you’ve been hiding in a cave, here’s the news. Since mid-May, Toronto’s long-controversial mayor Rob Ford has not only been the chatter in national news but he has also been making international headlines regularly. The mayor of Canada’s largest city is neck-deep into a scandal over reports that there is a cellphone video out there that allegedly shows him recently smoking crack cocaine.

Both Gawker and the Toronto Star claimed to have seen the video, and Gawker even went as far as going to crowd funding to raise the money needed to purchase the infamous video. $200,000 in funds were successfully raised on Indiegogo, however, the video and its owners have disappeared. But this scandal won’t be disappearing anytime soon, it’s still developing, and needless to say a lot of people want him out of the mayor’s office.

Not too far away from Toronto is Montreal where another scandal is quickly developing as well. Today, on June 17, Montreal mayor Michael Applebaum was arrested at his home for 14 charges that include fraud, conspiracy, breach of trust, and corruption in municipal affairs. The charges are said to be related to illegal real estate transactions.

And then, finally, we have our very own mayor here in Vancouver. Gregor Robertson, the mayor of Canada’s third most important city, has had a squeaky clean record – at least in relative terms compared to his counterparts in Toronto and Montreal. Not much can be said about him, except that he rides a bicycle to work everyday…not that there’s anything wrong with that.

Glad to be a Vancouverite. 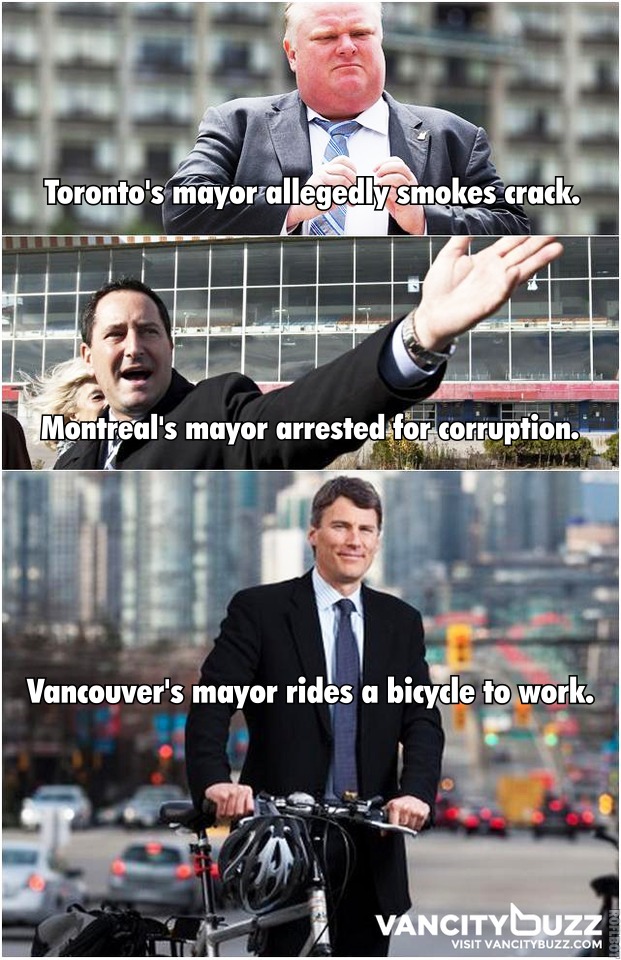