Driven by five talented design partners at the prestigious architecture studio, Herzog & de Meuron, have created an array of projects, from famous civic centres, museums and stadiums to distinctive private works. Stationed in Basel, Switzerland, the firm has garnered numerous prizes, including the Pritzker Architecture Prize in 2001, the Praemium Imperiale and the RIBA Royal Gold Medal, consecutively in 2007.

Established in 1978, Herzog & de Meuron is internationally recognized for designs that are equally inventive and responsive to site, geography and culture of the place for its conception. According to the Vancouver Art Gallery, Herzog & de Meuron were selected from a group of five shortlisted firms from across the globe.  The selection process began with a series of in-depth interviews and site visits to significant projects designed by each firm. Herzog & de Meuron were competing against the world’s most influential firms including Diller Scofidio + Renfro (New York), KPMB Architects (Toronto), SANAA (Tokyo), and Tod Williams Billie Tsien Architects (New York).

Currently, the Swiss firm is thriving and designing in major cities around the world.  The works of these architects are intensively scalable and are constantly redefining the built environment.  Their ideas about building form are inherently bold, and have become the proponents of 21st century contemporary architecture.

In the recent works, Herzog & de Meuron have demonstrated aptitude in modelling asymmetrical designs, relying on ingenuity and engineering innovation. It is not uncommon to hear a structural engineer say one of their biggest challenges is working with design architects.  Yet, Herzog & de Meuron have proven on many an occasion to accomplish the inconceivable.

The spatial effect of the stadium is novel and radical.  Yet, simple and of an almost archaic immediacy. Its appearance is pure structure. Façade and structure are identical. The structural elements mutually support each other and converge into a spatial grid-like formation, in which façades, stairs, bowl structure and roof are integrated. 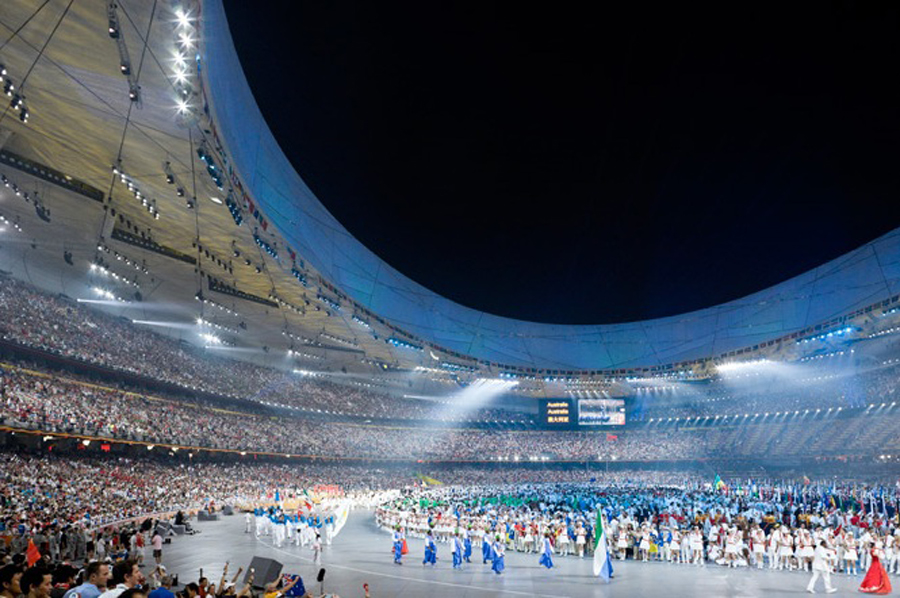 For those who live in towers, the experience of sameness and repetition can be relatively unpleasant. 56 Leonard Street acts against this anonymity and repetitiveness, emanating from so many towers of the recent past. Its ambition is to achieve, despite its size, a character that is individual and personal, perhaps even intimate. 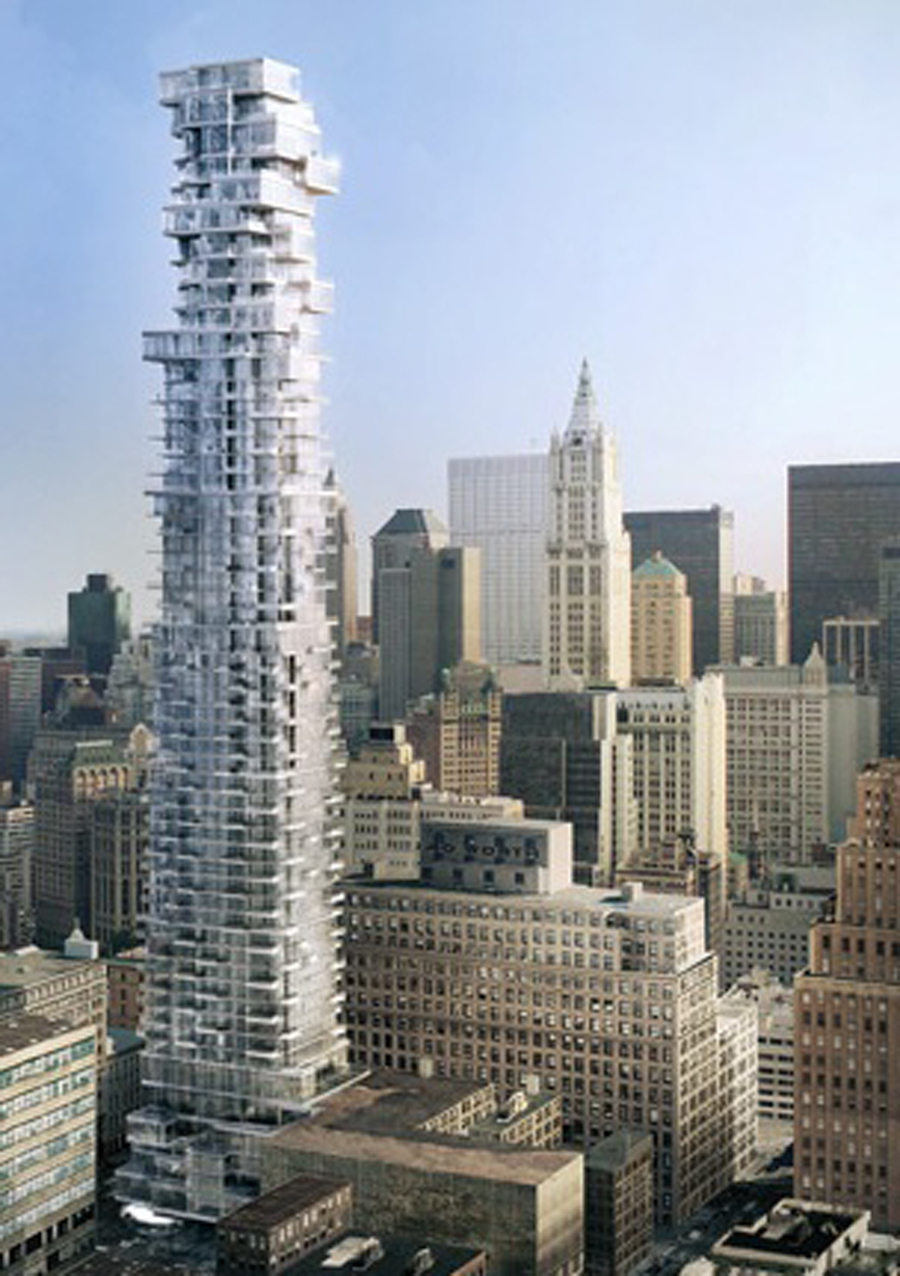 An important part of the original design for the Flinders Street Station from 1899 was a generous arched roof, adjacent to today’s existing heritage building, with three large vaults. This roof was never realized, and therefore, the station’s intended glory has never fully materialized. 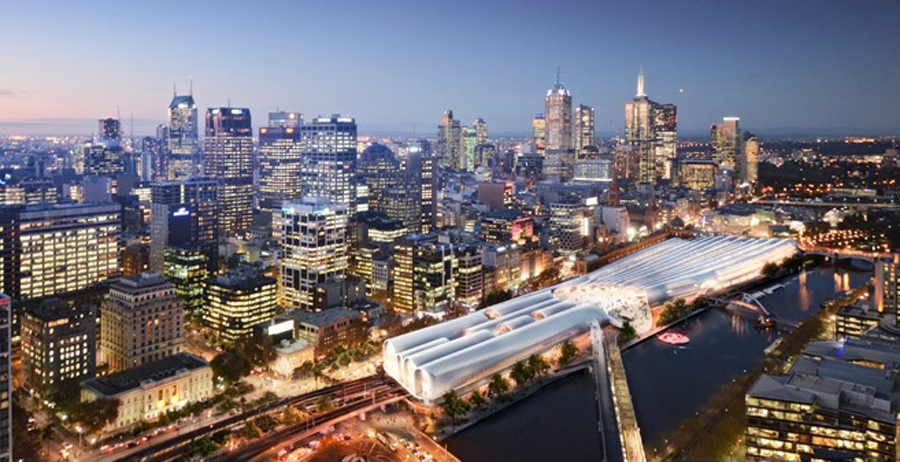 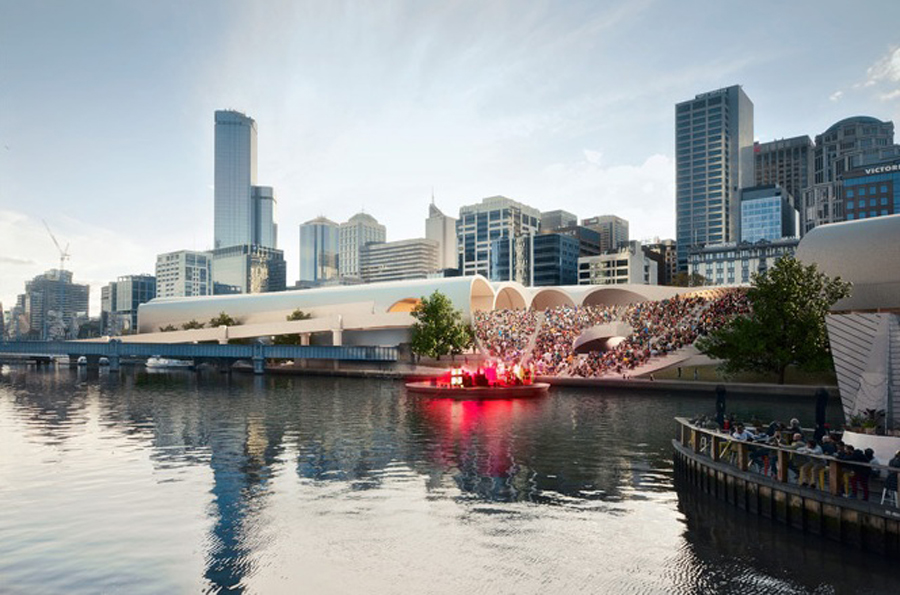 Every year since 2000, a different architect has been responsible for creating the Serpentine Gallery’s Summer Pavilion for Kensington Gardens. Herzog & de Meuron’s contribution is the twelfth. The designers instinctively wanted to sidestep the unavoidable problem of creating an object, a concrete shape. Their path to an alternative solution involves digging down some five feet into the soil of the park until striking groundwater. They created a waterhole, a kind of well, to collect all of the London rain that falls in the area of the Pavilion. 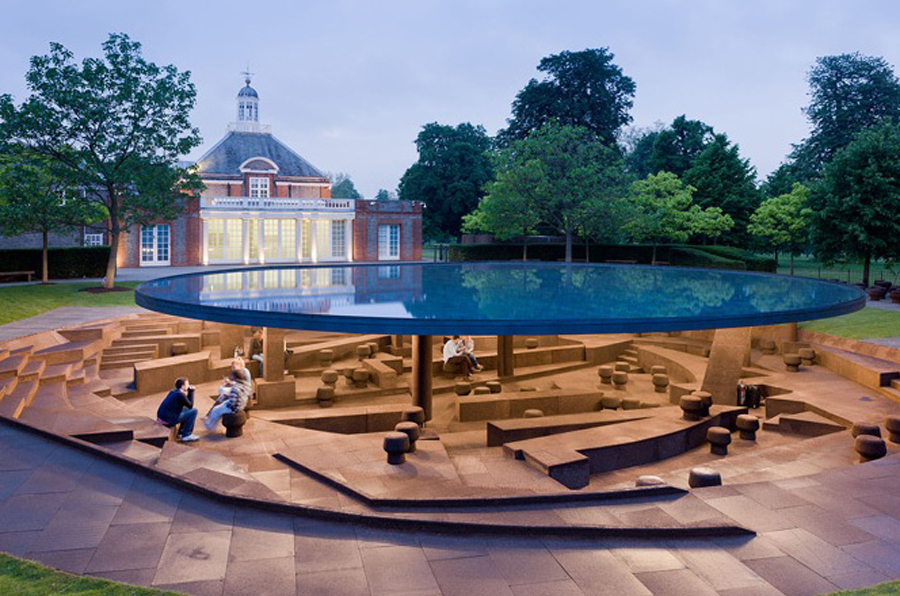 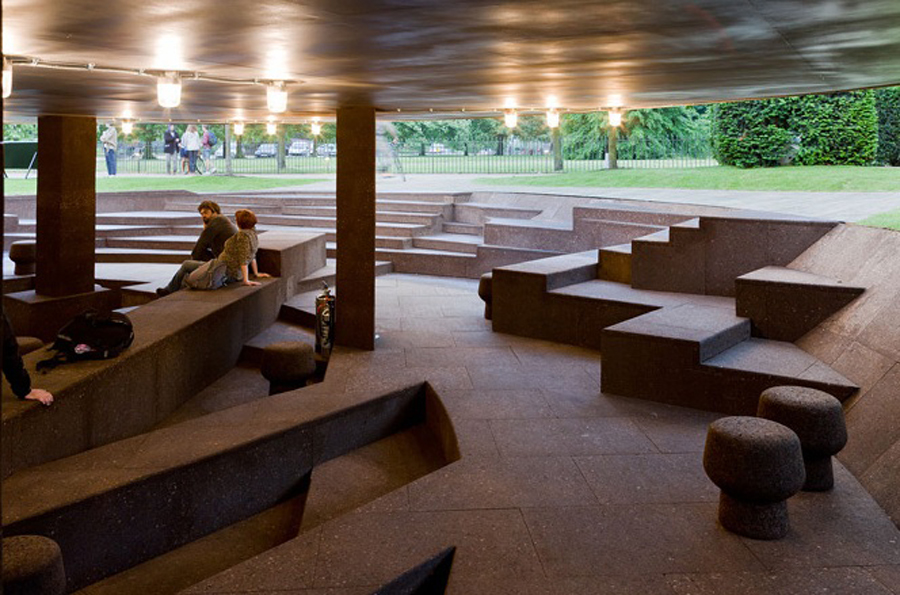 To allow for the maximum combination of functions, maximum flexibility and spatial interaction, the designers also decided that the program, such as the auditorium with 3,200 seats, large exhibition areas, foyer spaces, small administration areas and the restaurant should be organized horizontally.  With these ideas, the elevated flat triangular body emerged almost spontaneously, because it maximizes the possible footprint by forming an extensive cover for the plaza.

The hospital is surrounded by nature and contains a garden in its center. The horizontality of the building and its undulating form responds to the location of the hospital in the midst of the wide Danish landscape. A horizontal building is an appropriate building typology for a hospital, because this fosters exchange: across the various departments, the employees work on a shared goal: the healing of the ailing human being. 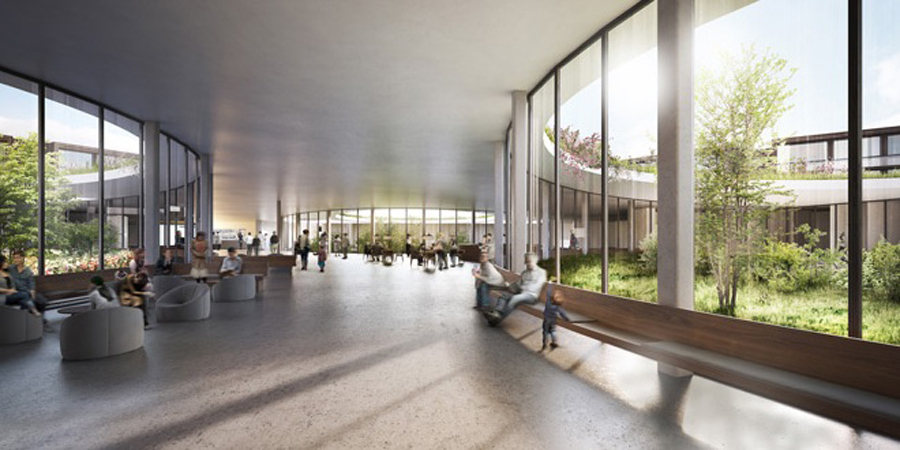 Competition submission for a research and development centre, including laboratories separated by layers of glass walls. The internal glazing would inspire science and transparency, ensuring scientific innovation is the primary focus for everyone at the facility. 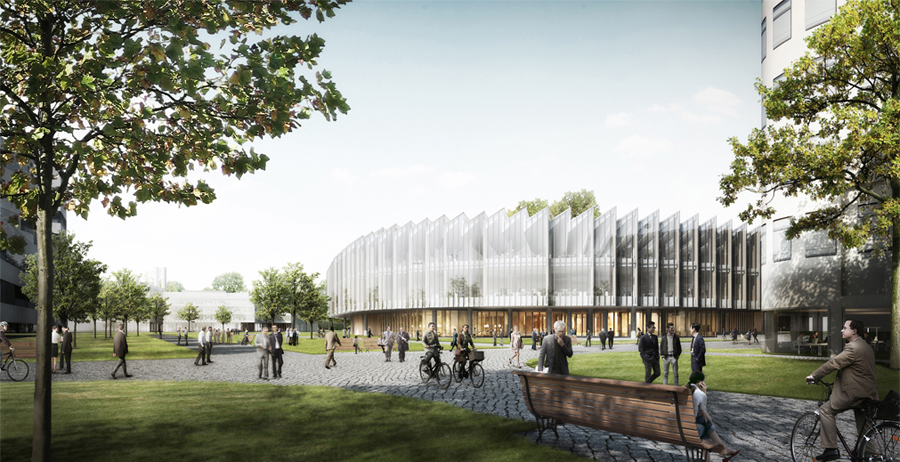 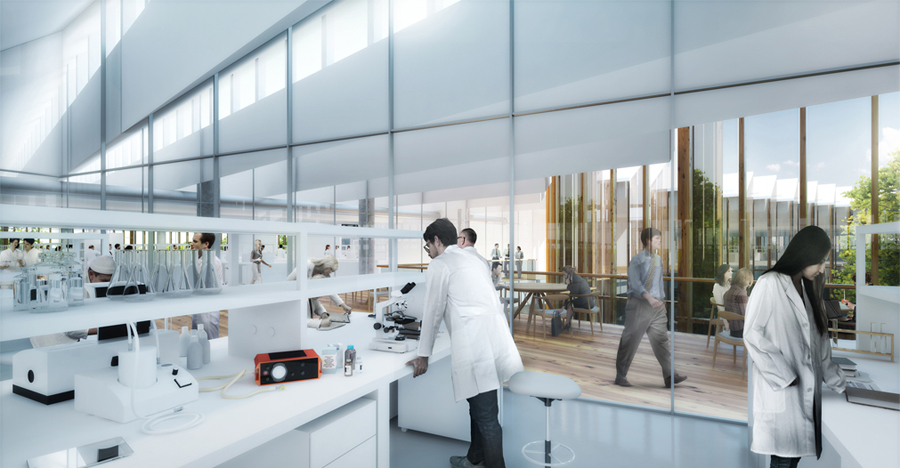 On October 1 at 7 p.m., the studio partners will present the vision of their architecture firm and highlights of their previous projects. Participate in what makes Herzog & de Meuron the most exuberant architecture team.  The firm will share with us their initial impressions of Vancouver, followed by a public open forum. 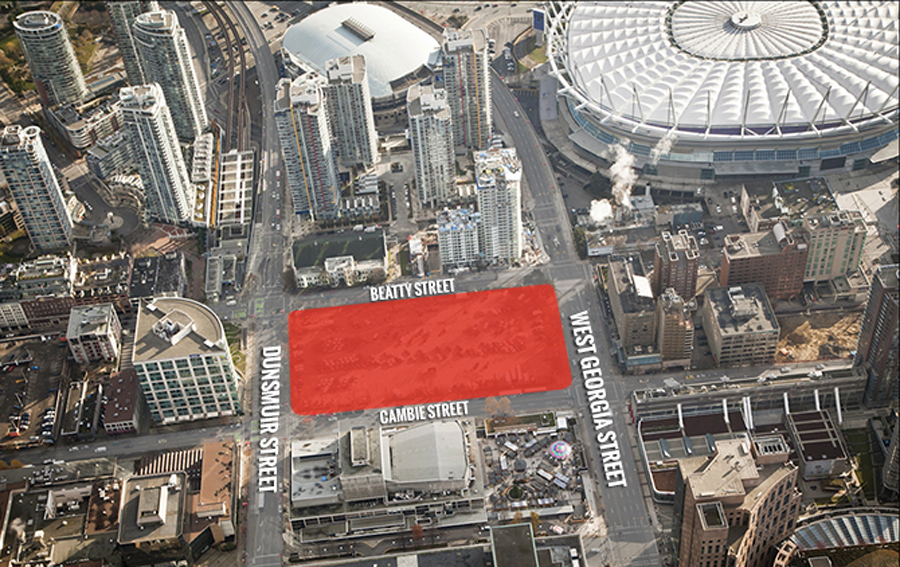 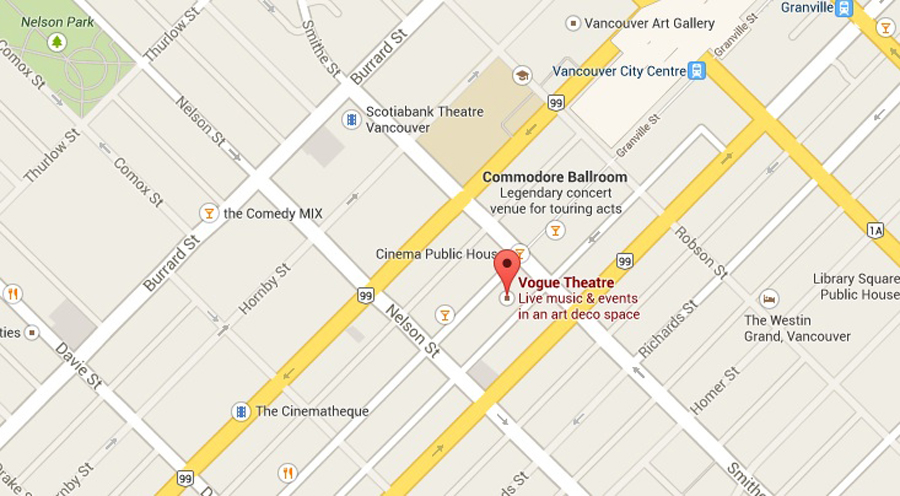