When you are at a point in your career where John Travolta is attempting to say your last name, and you could probably make out with, or make fun of, almost anyone in Hollywood and get away with it – some would say you have hit rock bottom. Or, you are Jessi Cruickshank.

She of MTV and eTalk fame, is now embracing her true geek-hood and finally doing something her mother would be proud of. Jessi met me at the Vancouver Art Gallery Café to tell me about hosting CBC’s newest show “Canada’s Smartest Person.”

Spoiler Alert: It’s not her.

But it could be you.

When one says, “Canada’s Smartest Person” you would naturally think, budding rocket scientist living in mothers basement with the social skills limited to reciting the encyclopedia, got it.

Actually, the 32 participants are pretty average people, and that is because the basis of the show is not about testing the traditional notion of IQ far beyond our grasp.

Consider this game like Jeopardy’s cool sibling, who parties on the weekends and still passes their exams on Monday.

“Yes, we have people with 10 degrees on the show from various Ivy League schools, but we also have an adorable cheese salesman, we have an amazing beat poet from Vancouver,” says Jessi. “Standing next to these people was way cooler than talking to any famous person.”

Competitors are tested in six unique areas, based on the theory of multiple intelligence that says true intelligence is not dominated by a single general ability but by the collective of many, including logical, linguistic, physical, visual, social and musical.

The show is also incorporating something that has never been done before. Now, people watching can download an app and actually play along with the show to test their own skills. Kind of how you would yell at the TV when you solved the Wheel of Fortune puzzle before the contestants. Except please settle down because bragging rights are a serious thing. Tweet your results, and challenge friends and family so everyone can know how smart you actually are, unlike that one time in University when you spent all your child support money on alcohol and were forced to steal your roommates crackers one by one so you wouldn’t die.

It’s an unintimidating and fun platform for players at home to rediscover a skill they thought they had lost or didn’t have in the first place.

Jessi recalls her run-in with math.

“I always thought I was really bad at it because I was told at Point Grey Secondary School that I was, and I actually did okay on some of the logical challenges, I was playing on the app the other day and I’m not as bad as I thought,” she says. “I think that when we’re younger and someone puts it in your brain that you’re not good at something, we start to believe it. The creator of the show said it’s not about how smart you are, but HOW you are smart – which is a really good way of putting it.”

So, I designed some questions and challenges to see where Jessi fit in.

Logical: Draw a house without crossing over the same line twice:

After a few tries, she nailed it. 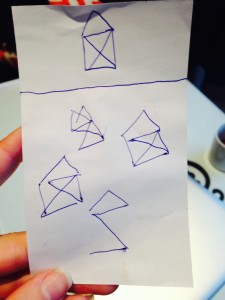 If you want to hear the sounds she made trying to draw these boxes – listen here.

Jessi: What does that even mean?!

Nicolle: A lung disease caused by the inhalation of a fine silica dust.

Jessi: You’re a secret nerd? That’s incredible. Aren’t we all? Being smart is cool. Okay, now that you have me thinking medical terms… Ankylosing spondylitis (a type of inflammatory arthritis and an autoimmune disease).

Visual: I spy with my little eye something that is orange

Nicolle: No, too obvious.

Jessi: The orange Buddah over there!

Jessi: The writing on the board?

Nicolle: There is a lot of orange in this coffee shop, I was not expecting this.

Nicolle: Yes! See, it’s behind you so it’s a trick question!

Musical: You have to say the first 4 lines of “I Like Big Butts” by Sir Mix a Lot

Jessi: Oh, easy…I like big butts and I can not lie, you other brothers cant deny, when a girl walks in with an itty bitty waist and a round thing in your face you get sprung. Want me to keep going? That’s a challenge that we should bring to the CBC next season, it’s classic. It’s funny to think that I would run around the house singing it. My parents also know the words.

Nicolle: Oh my, and do remember B44? If you get down on me I’ll get down on you. Are you kidding me, what was I singing?

Physical: Arm wrestling. Let’s do this. And don’t go easy on me.

Jessi: Ya sorry, Art Gallery Café, we are arm-wrestling over here. I will say… I was a competitive gymnast growing up, so I was like 75 pounds and ripped and I would challenge the boys and I would win. Now I have nothing to show for it.

After much groaning and slight perspiration, I won. I will spare you the audio track to that one but feel free to google “giving birth”.

Jessi: I feel like I worked out today. Arm wrestling is fun; we should have a rematch sometime.

There are many strange things in this world, for one, locking hands with Jessi Cruickshank and arm-wrestling like middle-aged men in the middle of the art gallery café at 9am. Yet, stranger still is our limited view of intelligence. Finally, there is a show hosted by a self-deprecating red head who has scammed her way into our hearts through uneasy charm, leather before breakfast and the hotter choice given Kathy Griffin. Canada’s Smartest Person is in the hands of the woman who took 13 minutes to draw a box, and I couldn’t be surer that TV is a better place because of it.