Your Big Macs are about to go next generation. McDonald’s Canada has revealed the three Vancouver-area locations that will feature touch screen kiosks, customizable burgers, and table service.

McDonald’s locations in Burnaby (7360 Market Crossing), Surrey (8586 120th Street), and Langley (20037 84th Avenue) will be the first three in Metro Vancouver to boast computerized self-serve ordering off the “Create Your Taste” menu and table service for those orders.

The “Create Your Taste” menu gives customers the choice of nearly 30 burger options including five types of cheese, 12 toppings, two buns, a lettuce wrap and nine sauces. (You can get pretty inventive with it, as test-drivers in other cities have discovered.) 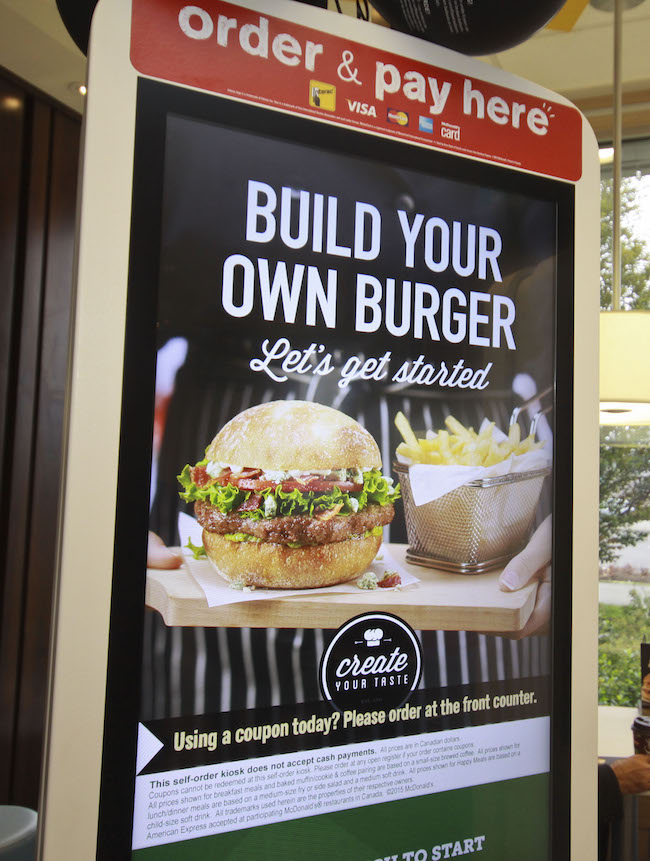 Following the success of touch screen ordering in the U.S., U.K., and Australia, McDonald’s Canada told Vancity Buzz in August they were set to begin testing self-serve touch screen kiosks for ordering, including the highly customizable burger options, in a small batch of stores in Ontario and Alberta. Some Metro Vancouver locations have the touch-screen kiosks, but not the CYT menu or additional support employees or table service.

The fast food chain recently announced they would be rolling out the program across Canada, with 1,000 McD’s nationwide expected to be offering the “Create Your Taste” menu and ordering by 2017.

Hansen, who calls the self-order kiosks and “Create Your Taste” option McDonald’s Canada’s “boldest move yet,” adds that what is happening at the restaurant chain right now is “raising the bar on our guest experience, one that I feel can’t be matched in the industry.”

Vancouver franchisee Andy Bates, who attended a launch event at the Langley location, says that the “vibe and the atmosphere is phenomenal,” inside restaurant, and that customers are already giving him great feedback on this new experience. Bates describes building his own CYT burger, with guacamole, cheese, and jalapeños, and how impactful, flavour-wise, it is to have that meat hit the grill only when the order comes in. 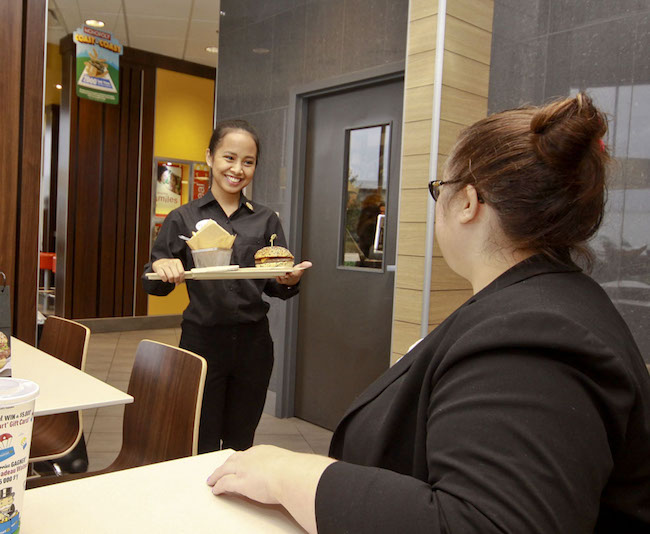 Customers can not only use the self-order kiosks for the CYT menu, but can also tap in their requests for the chain’s iconic items, like McNuggets and the Big Mac. The kitchen will time the orders to go out together–delivered by new table servers. Real, live humans will port the trays to seated customers; Bates says he saw one way in which this was a benefit to customers as he watched a mom place her order at a kiosk with her kids, and at the urging of the Guest Experience Leader, she was able to sit down and relax while they brought out the food to her table.

Overall, says Bates, adding the CYT menu, table service, and self-order kiosks is proving to be very exciting for McDonald’s franchises. “This is really exciting for the employees, too,” echoes Hansen.