In an early morning announcement, Mayor Gregor Robertson held a small press conference to announce that 41st Ave would become the next bike lane as a celebration of Vancouver’s 125 year anniversary. Here are the details of Vancouver’s next infrastructure upgrade.

Speaking to a small group of reporters, the mayor emphasized that the 41st Ave bike lane would be a smart expenditure of funds to help battle congestion in East-West corridors. Robertson cited that a growing number of people will bike from Burnaby to UBC and will be a great addition to the city’s sustainable vision. The mayor also justified the bike lane as a temporary solution until the UBC Skytrain can be built. 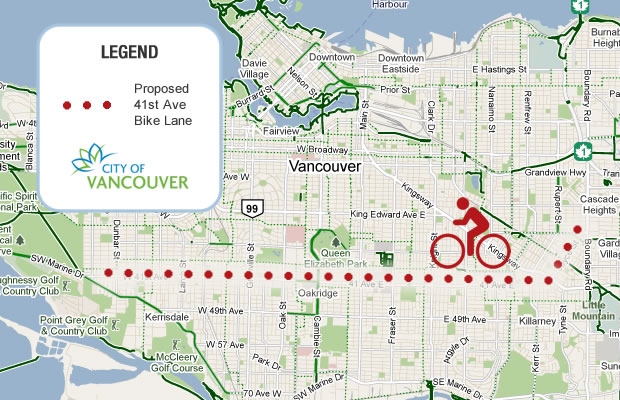 The map above shows the outline for the bike lane. The proposed price tag of the bike lane is $13 million with an estimated $100,000 yearly upkeep. The bike lane will have the same features as the Hornby bike lane: concrete poured for street separation with movable planters and special stop lights installed for biker safety. The bike lane will connect to Boundary via Joyce Street and then continue all the way down 41st. Riders will then decide their own route to UBC or whether they wish to continue to the airport via Cambie St.

“This is taking our dream from Hornby and expanding it further,” said Robertson during the press conference. “Traffic lights will also be synchronized to accommodate the flow of bikes down the road,” the mayor added. Robertson also outlined that the city council is expected to make a decision on the bike lane April 15th. The council will also be holding an open hearing where the public can voice concern on April 5th.

What do you think of the new bike lane?

I’ll admit, it could have used some more obvious hints but…