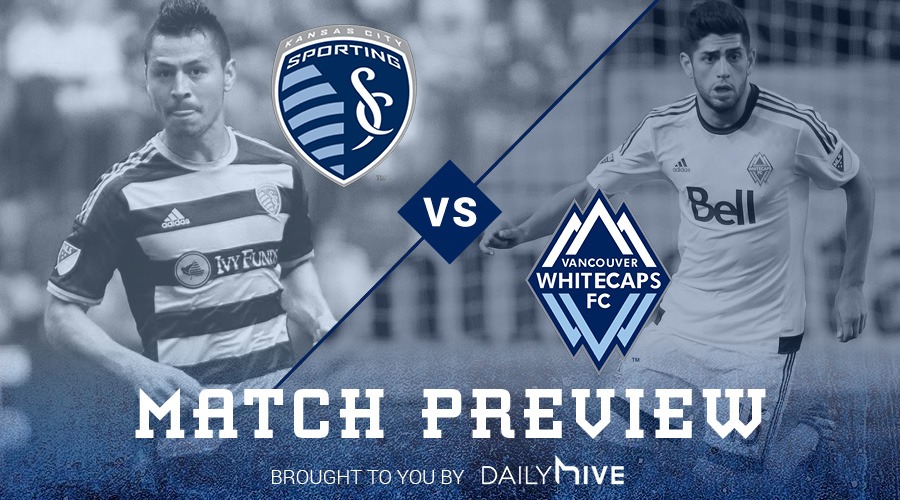 The Vancouver Whitecaps will take the field on Saturday to duel Sporting Kansas City for a third and final time in MLS regular season action. The two sides still have a couple of bouts scheduled in the CONCACAF Champions League group round.

Get used to these guys

The Blue and White and SKC reach this match on the heels of a busy schedule. Both teams are in the midst of a fierce MLS playoff battle in the Western Conference along with the CONCACAF Champions League group stage where both teams were drawn in the same group with Trinidad and Tobago’s side Central FC.

In March the Whitecaps visited Children’s Mercy Park in week 2 of the MLS season. On that occasion, SKC’s striker Dom Dwyer stole the show scoring twice to win the game for his team by a score of 2-1. A few weeks later, on April 27, the Whitecaps played host to an insipid 1-1 draw at BC Place.

The Whitecaps do not have a positive record when playing in Kansas City where they have played four matches, losing three and winning only one. Among those losses is the major collapse that the Blue and White experienced almost a year ago when they surrendered a 3-1 lead in the last ten minutes of the game to lose by a score of 4-3.

A positive result could springboard the Whitecaps into the run of form they need to get back into playoff territory.

The run of form

The Whitecaps’ recent struggles are well documented. More importantly, the criticisms levied on Carl Robinson’s side are, to some extent, warranted. The Whitecaps go into this match having won only two matches out of the last twelve, winless in the last five and on a three match losing streak.

As a result, the Whitecaps have been sliding down the standings and currently sit eighth in the Western Conference behind the San Jose Earthquakes. Perhaps more worryingly, Carl Robinson’s team has failed to score in a club-record four straight road matches, spanning 366 minutes since June 25.

We have been saying this time and time again, over the last few weeks. The Whitecaps need to start adding three points at a time and they need to do it now if they wish to keep their slim playoff chances alive.

Carl Robinson has a series of difficult decisions ahead of him. The Whitecaps will play on Saturday night in Kansas City only to turn around and host the same Sporting Kansas City side at BC Place on Tuesday night in the second game of the group stage for the CONCACAF Champions League.

The Welsh tactician has then to decide what the best starting XI to deploy for each of those matches is.

Should he focus his best players on the alive, albeit difficult, MLS playoff dream? Or should he, perhaps, turn his attention in securing a qualification to the knock out stage of the top continental club competition?

The Whitecaps lead the group so far after a young squad went down to Trinidad and Tobago last month and defeated Central FC. Peter Vermes and his team made the long trip to the Caribbean country earlier in the week, however, most of the SKC starters were left at home.

Central FC surrendered a two-goal lead and the game ended squared off 2-2. That result is particularly positive for the Whitecaps and sets them in prime position to qualify out of the group stage.

“I’ve gone passed the stage of thinking that people need to play if they’re not playing well,” Robinson said earlier in the week adding complexity to his decisions. “I said to the group there, decisions will be made based upon trying to win a game of football on Saturday.”

Whatever he does, it is clear that the Whitecaps need to shake out the malady that has been plaguing their 2016 campaign.