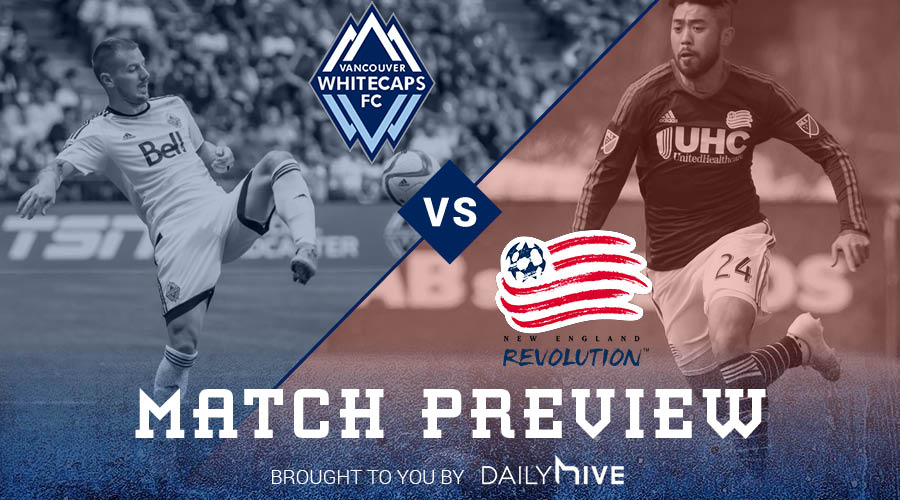 After two very long weeks off, the Vancouver Whitecaps are back in action this Saturday afternoon when they play host to the New England Revolution.

Gettin’ back to business

After a two-week break for the Copa América Centenario, MLS returns to action this weekend. While the Whitecaps have played a couple of Voyageur’s Cup matches in the meantime, only a handful of the squad have been involved in top-level matches at the Copa.

The three Whitecaps who have been away representing their countries were Costa Ricans Christian Bolaños and Kendall Waston, and Blas Pérez, who represented Panama . Out of the three, Pérez made the headlines for scoring a very impressive brace in Panama’s 2-1 win over Bolivia.

Waston also made the headlines at the Copa América, but unlike his teammate Pérez, it was for all the wrong reasons.

In the dying moments of the match against Bolivia, Waston was shown a straight red card for a lunging tackle from behind on Nelson Valdez. The tackle, and sending off, was eerily similar to the incident in which Waston hacked down Dairon Asprilla of the Portland Timbers on May 22nd.

While Waston and others were off at the Copa América, the Whitecaps were busy here at home.

After losing the first leg of the Voyageur’s Cup semi-final in Ottawa, Carl Robinson fielded an MLS-calibre lineup for the return leg at BC Place on June 8th. The Whitecaps quickly overturned the two-goal deficit, and defeated the Fury by an aggregate score of 3-2.

The Voyageur’s Cup matches did give Robinson the opportunity to give some of his players some much needed playing time, but did two matches against an NASL team provide the quality to keep the Whitecaps in top form for MLS? That is up for debate, but at the very least the Whitecaps will be well rested after a 10-day break when they face the ‘Revs on Saturday afternoon.

Suspensions, injuries, and international call-ups have been a recurring theme for the Whitecaps all season long, and this weekend will be no exception.

Striker Masato Kudo is still sidelined indefinitely with a broken jaw, but the trio of Waston, Pedro Morales, and Octavio Rivero will all be suspended for Saturday’s match. Waston will be serving the first of his two-match ban for his tackle on Asprilla, while Morales and Rivero will be serving their one-match bans for their own recent transgressions.

Once again Carl Robinson is faced with the prospect of being without several of his key players. Waston has struggled at times this season, but both Morales and Rivero have been red hot in recent weeks.

While the absence of the trio is a problem for Robinson, his squad will be strengthened by the return of Bolaños and Pérez. Will the Caps’ bench boss stick with his beloved 4-2-3-1 formation and start Pérez at centre forward, or will he opt for a more unconventional 4-4-1-1 that brought the team success recently in the win over Toronto FC?

While the reinforcements at striker may be rather thin at the moment, Robinson should have fewer worries about his midfield replacement for Morales. If he should choose to utilize the 4-2-3-1, then we could see Russell Teibert start next to Matías Laba, and further forward expect to see the classy and talented Nicolás Mezquida filling in for Morales.

Also in the Revs’ squad is striker Kei Kamara, who just a few weeks ago was the subject of a viral trade rumour involving Vancouver’s Octavio Rivero. The trade never happened and Kamara was instead traded to New England. Rivero, on the other hand, found his mojo and has since scored several goals in league and cup matches for the Whitecaps.

Since being traded in the offseason, Koffie has been a mainstay in the Revs’ starting lineup this year. However, Koffie has now missed several matches after spraining his right knee in a match against FC Dallas on May 21st.

The former Vancouver fan-favourite has not yet returned to training, and it’s highly unlikely Koffie will make a return to play against his former club.

The Revs head coach Jay Heaps told the official New England Revolution website last week that he was planning to re-evaluate Koffie’s fitness this week before allowing the 24-year-old Ghanian to return to training.

Currently, the Revolution sit in 8th place in the Eastern Conference, and have won only three matches all season long. In theory New England should be ripe for the picking, but this is a scenario that Whitecaps fans have seen before this season.

Twice before this year an undermanned Whitecaps team has faced a theoretically ‘inferior’ eastern opponent in DC United and New York City FC and the ‘Caps were outscored by 7-2 in those two matches. The big difference this time is that the Whitecaps will be playing the match here in Vancouver, and should benefit from home field advantage.