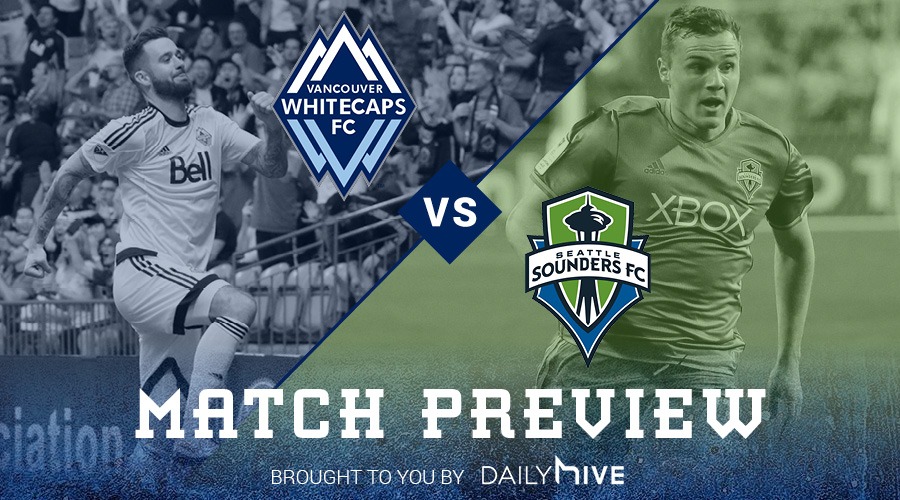 After a convincing 4-1 win over Trinidad & Tobago’s Central FC in CONCACAF Champions League midweek, the Vancouver Whitecaps FC return to league action against a team that is in red-hot form as the playoffs approach.

The Seattle Sounders have burst into the playoff picture since the addition of midfielder Nicolas Lodeiro. Recent results have moved the Sounders out of the Western Conference’s basement and onto a Western Conference friend’s couch – or, as it’s also known, sixth place.

Conversely, the Whitecaps (as I strain to continue this metaphor) are complaining about the WiFi in the basement as rent day approaches. Or something.

Look, the point is, a win keeps Vancouver’s wafer-thin playoff hopes alive and helps them move into contention for the final prize left to play for: the Cascadia Cup.

The Voyageurs Cup ended in heartbreak. Pre-season predictions of a Supporters’ Shield seem laughably misinformed in hindsight. The post-season is nearly out of Vancouver’s grasp.

So, like someone who’s desperate enough to consider Manny up there a human being worth spending time with, it’s time to lower those expectations.

Let’s make one thing crystal clear, though: this is not in any way, shape, or form a denigration of the Cascadia Cup’s importance. A supporters’ trophy carries with it a not insignificant amount of local pride and bragging rights. Need proof? Watch this celebration and try to tell me it means nothing:

So, yeah, there’s still something to play for.

Here are the current standings:

It’s not a trophy that gets you into Champions League or gives you certifiable league-wide prestige, but it’s something. It won’t guarantee a place in the post-season but it will provide a highlight to balance out a season’s worth of lowlights.

At this point, I’ll take whatever I can get to cheer about. One has to hope a desperate player base will rally around any chance to cheer for something, too.

Maybe the Whitecaps should only play in Champions League

I mean, based on the league table, they pretty much only show up for Champions League as it is. Hey-oh! Thank you! Good night!

Sorry. Manny’s act up there was catchy in its atrociousness. Where were we?

Right! Translating form from one competition to another. It’s a difficult concept for a number of reasons, not the least of which is the quality of the opposition.

@86forever When your opposition is a T&T domestic team and a doesn't-care-about-CCL, kinda easy to get results. #CCL

Beating a Sporting Kansas City B-team (twice) is not a reliable benchmark of a team’s talent. Neither is beating a Trinidadian team still in their pre-season (twice). It’s good for morale and that’s about it.

What would be great is if the brief glimpses of talent we’ve been teased with in league play would translate into some consistency. We’ve seen clear evidence that this team can score. We saw it three times against Colorado – a Colorado team sporting the league’s best goals against count.

See? The Whitecaps can score outside of Champions League and against legitimately good defensive teams, too. It just hasn’t happened very often this season.

Now would be a really good time to fix that mindset and cement the core fundamentals of how to score a goal or two (or three).

Just in case you thought going on a stupidly good run of form wasn’t possible in the Western Conference, please note that the Seattle Sounders have lost once – once! – in the last ten games.

It’s not exactly rocket science, either.

Seattle is getting DP-tier performances from their brand new DP, the afore-mentioned Nicolas Lodeiro. Their primary goal-scorer is scoring goals. The defence has finally clicked together after a very rough start.

It’s enough to make you sick.

If there was ever a time to return to the Whitecaps of 2015, now is it. Kendall Waston is unavailable due to yet another red card suspension, so the likely pairing of David Edgar and Tim Parker on defence will need to be in constant communication and lock-step with each other and the fullbacks to prevent attackers breaking through.

As for the rest, it’s the same old story: Matías Laba has to own the midfield, whoever’s out wide needs to work their tails off to generate quality chances and whoever’s up front has to actually finish said chances.

Seattle proved a storming return to form can be done. Vancouver has to prove they’re capable of the same feat.

2-1 Vancouver. Since my track record when predicting draws and low-scoring losses is atrocious, let’s try some positive thinking, shall we? Once again: Vancouver put three goals past the living wall that is the Colorado backline. Therefore, it’s not impossible to score two against Seattle. Throw in a suspension to Nicolas Lodeiro (yellow card accumulation) and the sword of Damocles that is head coach Carl Robinson’s edict of jobs at stake and we could be in for a humdinger of a Cascadia clash.