Much of the North Shore is in the dark this evening after a series of substation explosions knocked out electricity to thousands of B.C. Hydro customers.

The first blackouts began late this afternoon just after 4 p.m., and the outages have continued to escalate into the evening. Nearly 20,000 customers in West Vancouver and particularly North Vancouver are currently without power.

High winds throughout the day have caused a number of power outages across the entire region. Earlier in the day, 40,000 customers in the Lower Mainland were without power, and outages south of the Inlet are continuing into the evening.

At this time, 80,000 customers across the Lower Mainland are without power. Lights along the Lions Gate Bridge are also out.

The blue light I was lucky to capture in this video is apparently from exploding transformers on the North Shore due to today’s wind storm. #vancouver #vancity #bcstorm

Power outage in North Vancouver is making it difficult to wrap up our project. Wednesday, #humpday will be a push. pic.twitter.com/wjiuAnp1zc — Ken Ferguson (@kenfergusonent) November 18, 2015 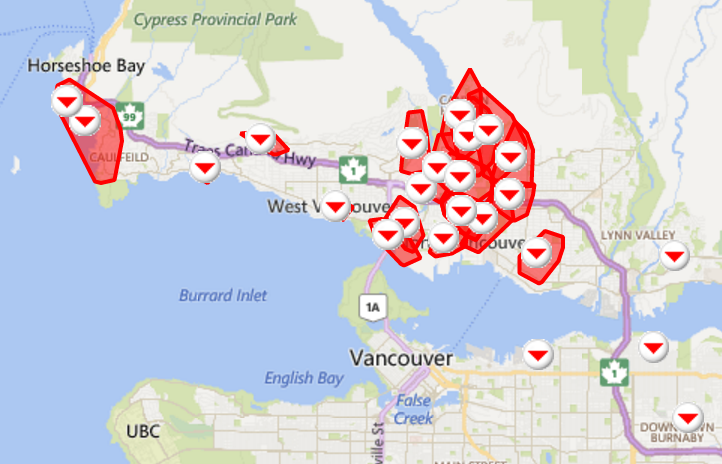