According to Port Metro Vancouver, the fire broke out just after 1:30 p.m. and is located at the Centerm Container Terminal where there is a four-alarm fire at multiple containers.

Thick white smoke can be seen billowing out of the area from kilometres away. The public is advised to avoid the cloud of smoke as it contains a hazardous organic compound known as trichloroisocyanuric acid, a possible eye and skin irritant.

In response, the City has advised residents near the Port to go indoors and close their windows; everyone in the immediate vicinity east of Main Street, north of 1st Avenue and west of Nanaimo Street is asked to find shelter and stay indoors. The local public libraries in the area will remain open for people in need of a place for refuge.

If you need to go outside, Vancouver Coastal Health Authority has advised people to cover their nose and mouth with a wet towel.

Port workers have been evacuated, emergency and Hazmat responders have arrived at the scene, and the City of Vancouver’s Emergency Operations Centre has been activated. All port operations on the south shore of Burrard Inlet have been shut down, including rail and truck access.

A dozen firetrucks and two fire boats are fighting the fire. At this time, it is not known whether there are any injuries.

Canadian Pacific’s rail operations have been shut down and West Coast Express train services this evening rush hour will be delayed or canceled. Commuters who use the train service are asked to take the SkyTrain Millennium Line to Lougheed Station and transfer to the special WCE bus service.

There are social media reports of a burning chemical smell as far away as Burnaby.

UPDATE at 6:20 p.m. – The order for the public in the affected areas to find shelter indoors has been lifted. The fire at Centerm Container Terminal is under control and the smoke has lifted, but anyone with persisting breathing issues is urged to see a physician immediately. 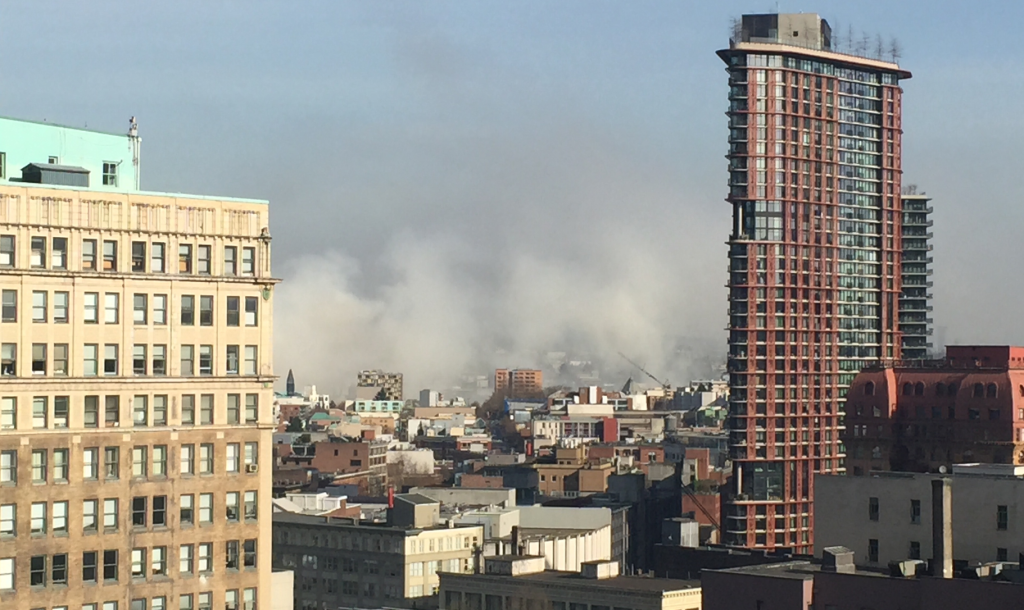 #Vancouver is a cacophony of wailing sirens right now. Hope the fire at @PortMetroVan isn’t too serious. pic.twitter.com/X8r6KOKYdA

#BREAKING Vancouver BC Firefighters working to put out fire at PortMetro Vancouver. No injuries reported.#LiveOnKOMO pic.twitter.com/euKUu0qIj6

Vancouver police officers put on protection against a chemical fire raging at the Port of Vancouver. pic.twitter.com/ALfoDV2YmQ

There’s currently a Hazmat fire a few blocks from my work at the Port of #Vancouver. Yikes. pic.twitter.com/HQoI3G8tJl

office view of the fire at the #port #vancouver pic.twitter.com/03BCaGTsuh

It’s showing no signs of stopping. Fire crews still seem to be at a distance. #CTVVancouver #port #fire #vancity pic.twitter.com/TpsAS9F3PZ