Premier Christy Clark has announced that a new bridge will replace the aging and seismically unsafe George Massey Tunnel.

For those who rely on Highway 99′s George Massey Tunnel for their everyday commute, much-needed relief is in sight. The announcement on the new bridge to replace the 1958-built bottlenecked tunnel was made during the Union of B.C. Municipalities convention.

“We are keeping our promise to replace the George Massey Tunnel and improve the Highway 99 corridor, starting in 2017,” said Premier Christy Clark. “Congestion at the tunnel is frustrating for families and stalling the economy. A new bridge will improve travel times for transit, commuters and commercial users, and open the corridor up to future rapid transit options.”

Engineering and technical work is now underway to develop a project scope and business case for the new bridge and associated Highway 99 corridor improvements.

According to conceptual renderings, the new Massey Bridge will carry 10 lanes of traffic (including 2 HOV lanes) like the new Port Mann Bridge and will also be accessible to pedestrians and cyclists. The exact alignment between Richmond and Delta is not known at this time, but construction is scheduled to begin in 2017. 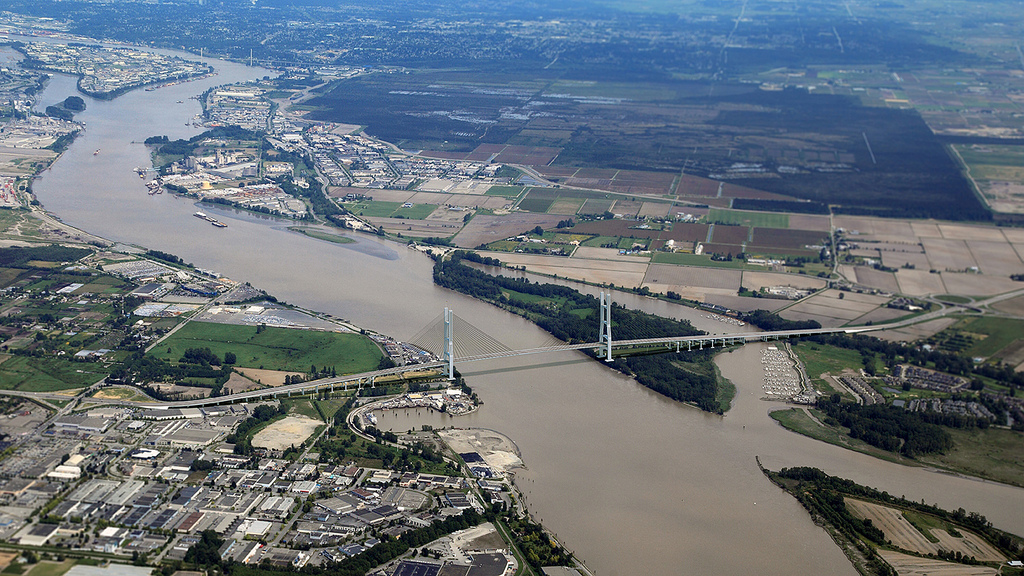 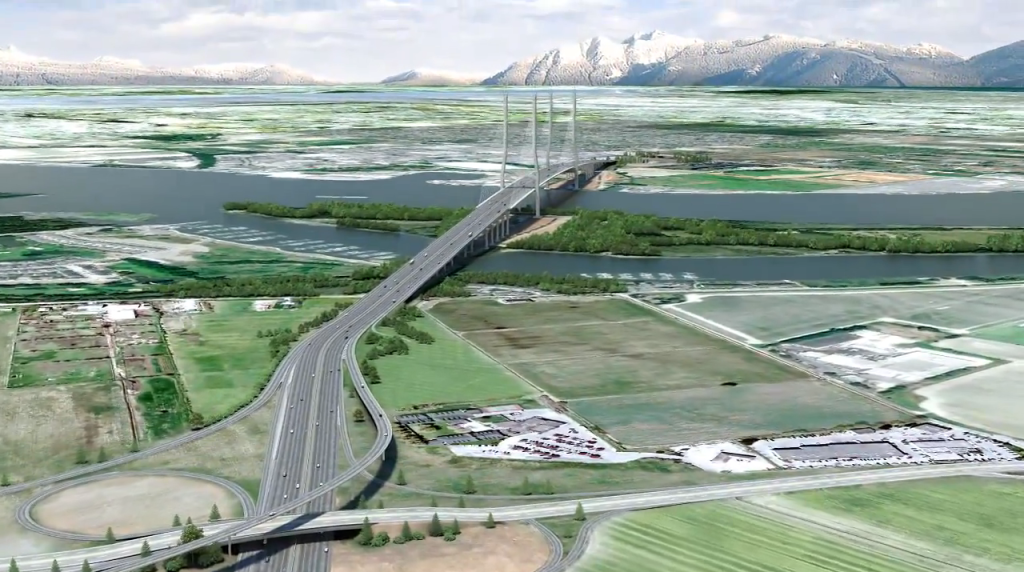 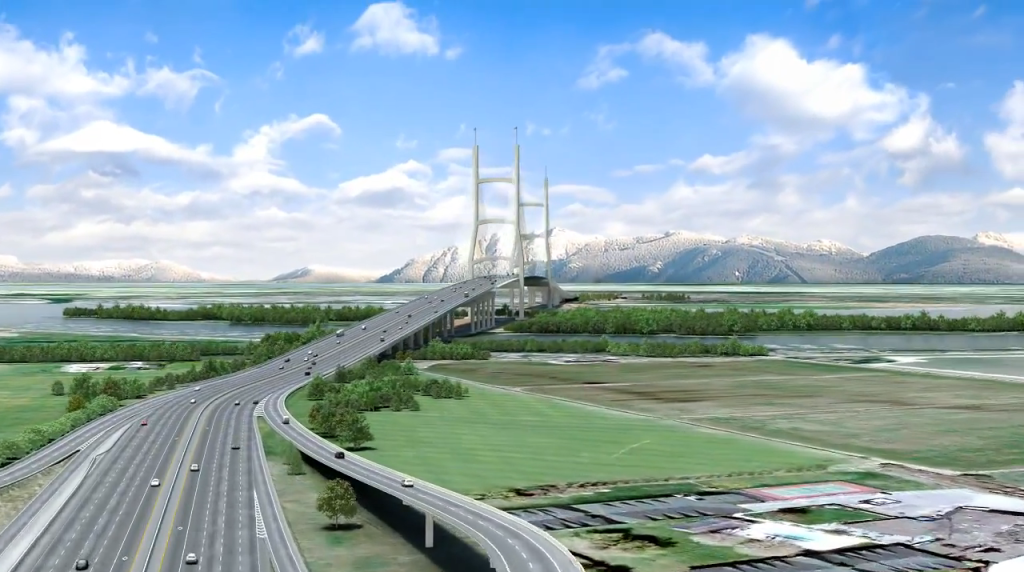 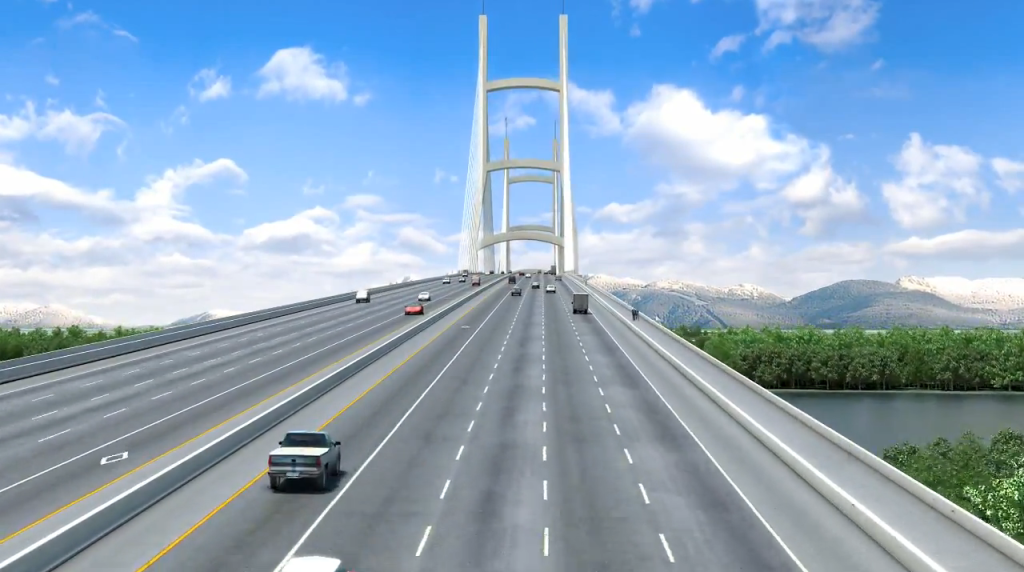 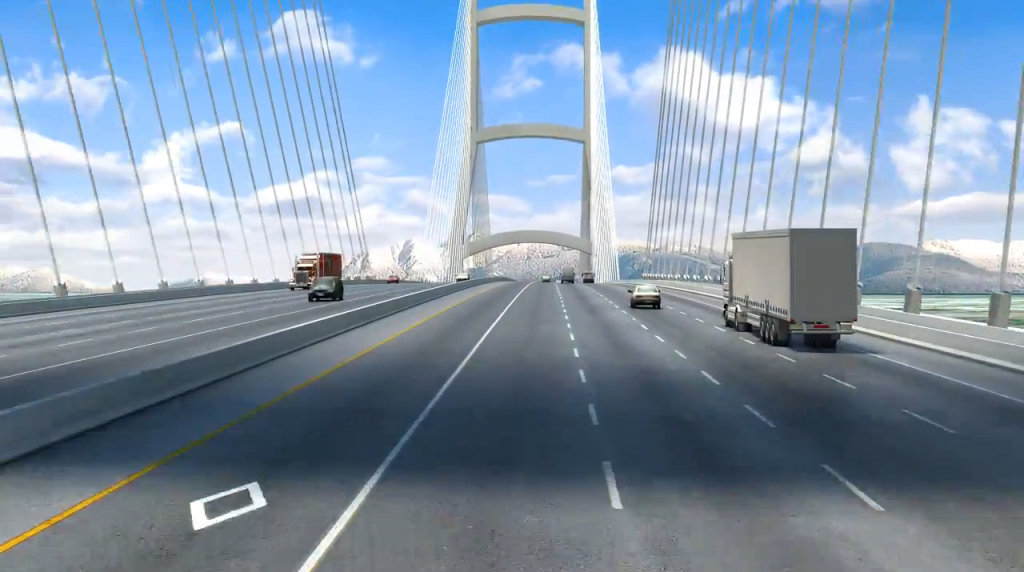 Source: Government of BC

At this time, it is not known how the bridge’s construction will be funded including any possibility of tolling and private sector (P3) involvement.

The new crossing will likely exceed the billion dollar price tag given the similar costs reached with the newly opened Port Mann Bridge and the Golden Ears Bridge as well as the estimated cost of the proposed Pattullo Bridge replacement.

“With the Port Mann Bridge open to traffic and the South Fraser Perimeter Road nearing completion, we’re moving to fix the next of B.C.’s worst traffic bottlenecks,” said Transportation and Infrastructure Minister Todd Stone. “Today, we’re getting to work to develop a solution that will improve the movement of people and goods on a highway that is important to commuters, and vital to our Asia Pacific Gateway.”

Aside from relieving commuters from the worst bottleneck in the Lower Mainland, the new bridge opens the possibility of allowing tankers and ships to travel upstream along the south arm of the Fraser River’s estuary. The existing shallowly-built Massey Tunnel restricts this capability.

The Massey Tunnel is the busiest stretch of road along Highway 99 with an average of 95,000 vehicles per weekday on just four road lanes managed with the counterflow system.

In addition to the tunnel’s importance for commuters (particularly those residing in the south of Fraser municipalities), it also carries more than 15,000 freight trucks per day – it is a vital truck route to and from Deltaport, the Tswwassen ferry terminal, and the US-Canada border crossings at Peace Arch and Surrey.

There’s no question that the Massey Tunnel route is vital to the Lower Mainland’s economic well-being. However, in addition to regular daily commuter congestion, accidents have often caused delays lasting several hours in duration. The tunnel is severely under-built for today’s needs, never mind the growing demands of the future.

Pre-cast tunnel sections were sunk into the Fraser River’s river bed – a 600-metre thick layer of loose sediment on top of bedrock – and then covered with a protective layer of rock. In the event of an earthquake, liquefaction of the sedimentary layer the tunnel sits on is likely, leaving the tunnel with nothing to sit on and vulnerable to flooding and collapse. 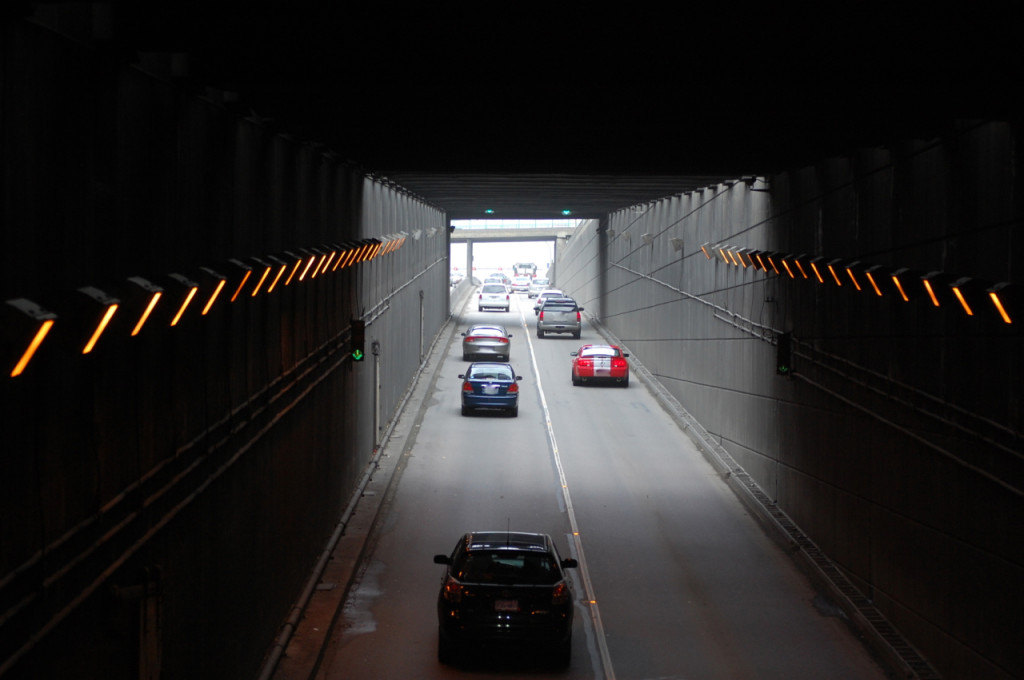 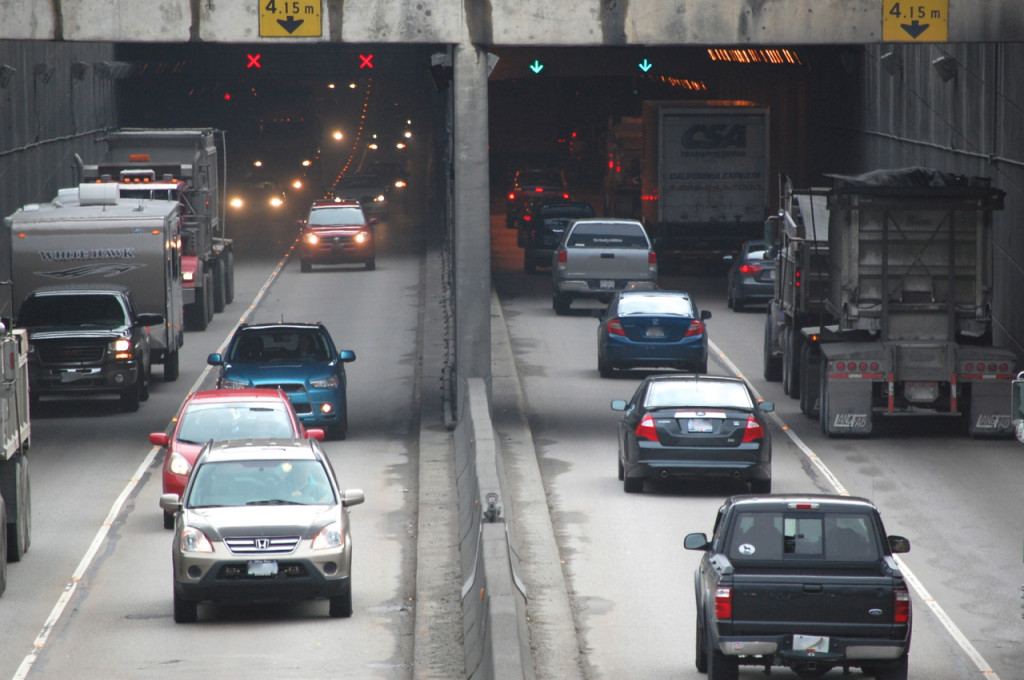 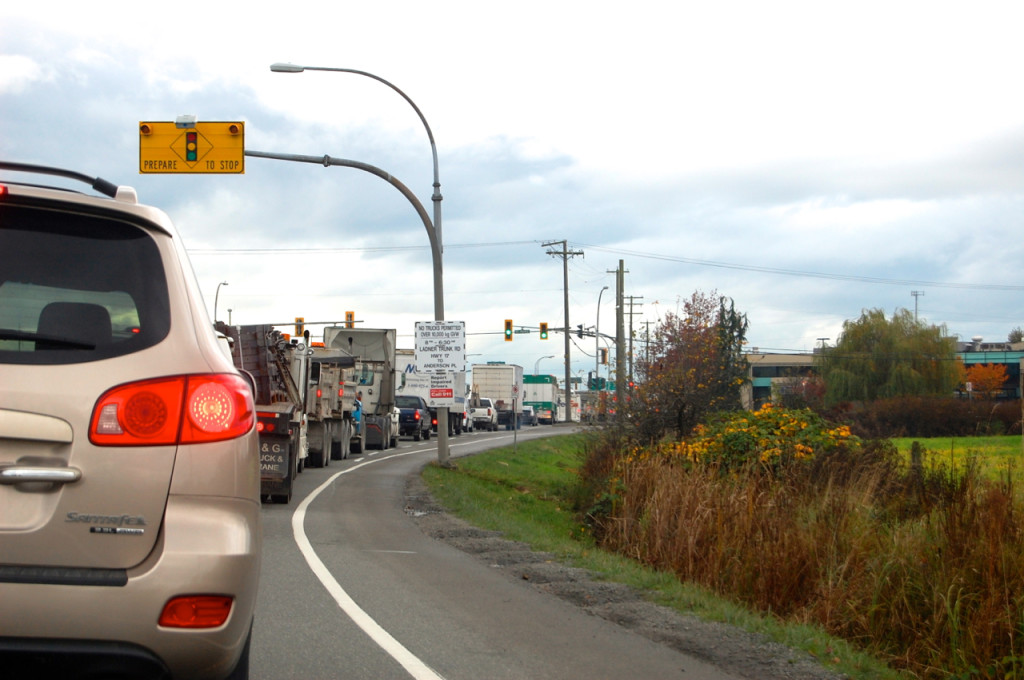 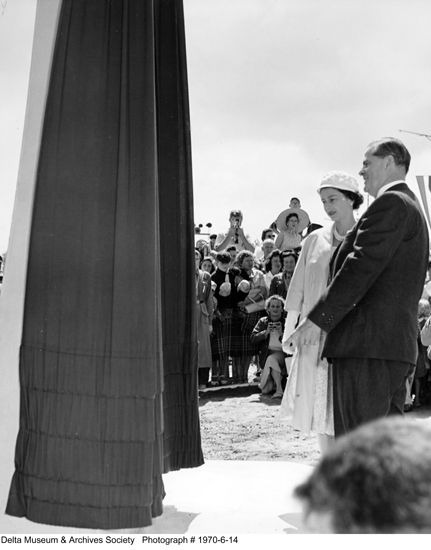 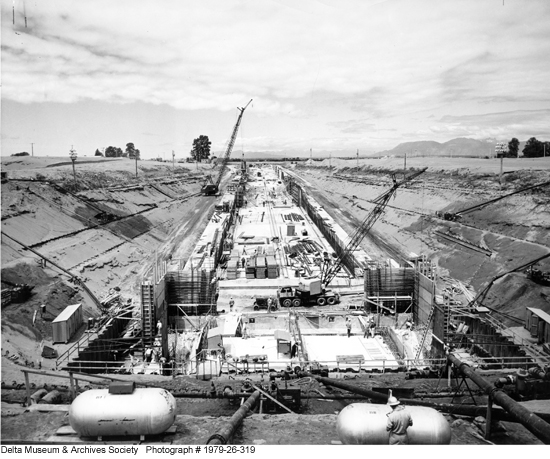 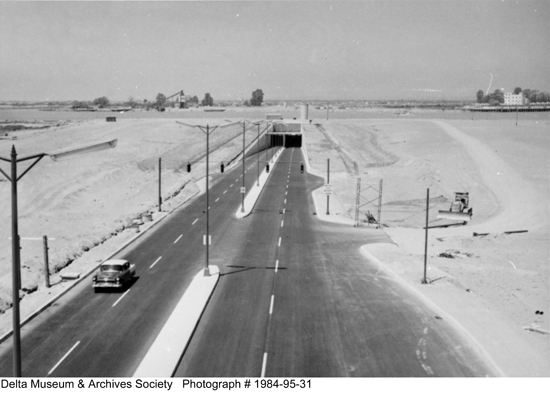 Images: Government of BC