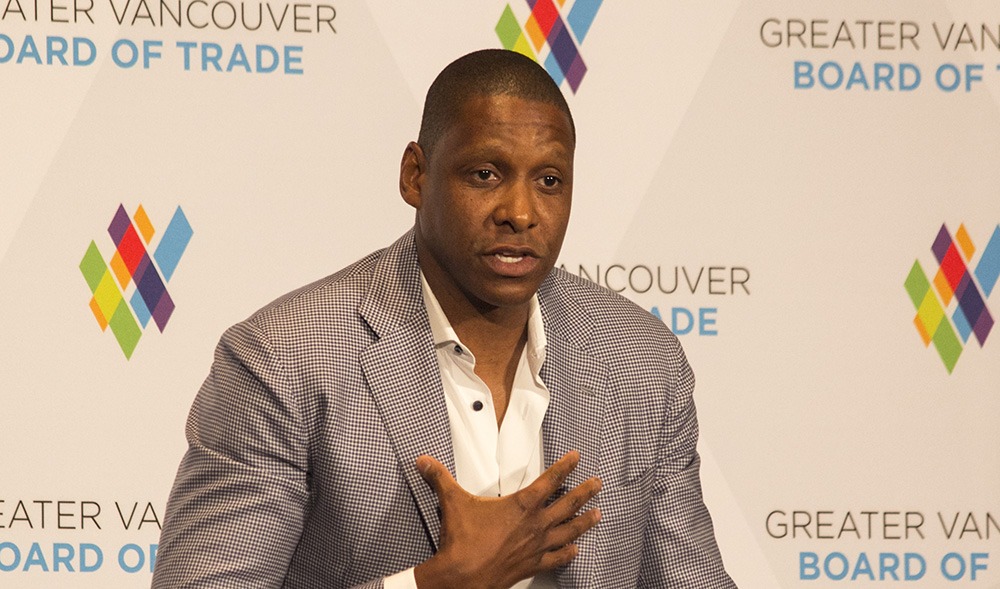 Masai Ujiri beleives the Raptors can learn from experience, grow from within.

With the Raptors and Warriors in Vancouver for the NBA’s first preseason game of the 2016-17 season, Raptors’ President and GM Ujiri took part in a conversation on building a winning culture hosted by the Greater Vancouver Board of Trade on Friday.

“We realize we are still a growing team. Last year’s success was last year’s success. Somehow you have to build off that and in some ways you almost have to forget it too,” Ujiri told the the media after the event.

“We have to instill winning habits, winning ways, a winning culture. We have 10 players who are 25 and younger, which means we are a young team, so slowly we’ll continue to grow and continue to build.”

Following the most successful season in franchise history – the team won 56 games in the regular season and took Cleveland to six games in the Eastern Conference final – the next step is for Toronto to be able to take on the league’s elite teams such as the Warriors and Cavaliers.

How can they do that? Again, Ujiri said it’s all about experience.

“Experience doesn’t come overnight, it doesn’t come in one year. You have to continue growing and building. We want to be in the mix of those teams. That’s how you build that winning culture.”

During the offseason, the Raptors lost the popular and effective defensive specialist Bismack Biyombo. To help fill that gap, they signed 6′-9″ centre Jared Sullinger. They’ll also have a healthy DeMarre Carroll this year.

First round draft picks Jakob Poeltl and Pascal Siakam were also at training camp in Vancouver.

Asked if the Raptors are looking to add any more pieces to the roster, Ujiri replied, “This is it.”

With character being the buzzword in building that culture while analytics continue to grow in sports, we asked Welts if character is more important than talent, when it comes to sports.

“You still have to be able to play the game at an incredibly high level, so one can’t go without the other, but the two together are probably the most powerful thing you can have.”

Speaking with Ujiri, we asked if members of his head office butt heads when it comes to talent vs. character.

“We fight every day in our office. To me that’s good culture – they are good arguments,” said Ujiri.

“For me, you end up agreeing to disagree if you have a good organization – that’s how you build. If everybody’s going to say ‘yes yes yes’, that’s the worst.”

Is Vancouver an NBA city?

Warriors President Rick Welts hopes the NBA might return to Vancouver at some point in the future.

“To see the kind of fan support this game has received is a real statement about how people feel about the NBA in Vancouver,” he said.

James Worthy agrees: “I think if [the NBA] came back on their own and built a team, I think the fanbase is here.”

If you disagree, feel free to take it up yourself with the 6′-9″ hall of famer.

Meanwhile Ujiri was able to find a silver lining in the loss of the Grizzlies: “It’s unfortunate because [Vancouver’s] a basketball city, it’s a sports city, you can tell,” he said.

“Right now, my selfish side, I’m glad these guys will be Raptors fans.”