In many ways, the Vancouver Canucks’ franchise can be described in one word: Polarizing.

As such, it should come as no surprise that much of its history is coloured by polarizing figures.

But no figure in Canucks history, bar none, embodies that discrepancy more than Mark Messier. In fact, to much of the fanbase, Messier’s tenure in Vancouver holds no redeeming elements, whatsoever.

Last weekend, The Province ranked Messier at #93 on their list of 101 Greatest Canucks of All Time. Unsurprisingly, many fans challenged the publication, drawing attention to the team’s three catastrophic seasons with Messier at the helm.

And in many ways, they’re right.

After a series of inexplicable negotiating gaffes in the 1996 offseason (costing the Canucks a done-deal with Wayne Gretzky), ownership turned to Messier to save the franchise.

Not exactly the result ownership expected.

But then again, maybe it shouldn’t. 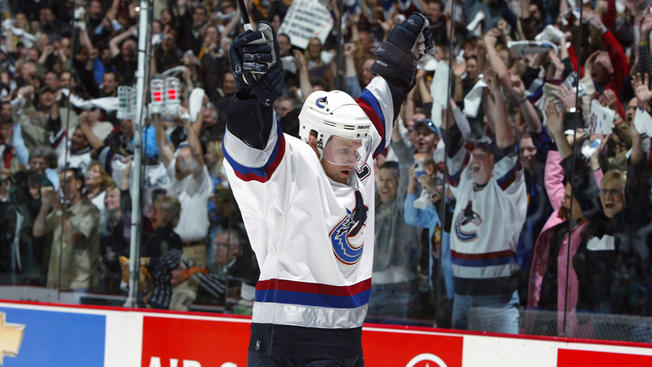 Following Messier’s departure, the Canucks reached the playoffs in four straight seasons under the leadership and dominance of new captain Markus Naslund. With Naslund as the face of organization, things changed dramatically both on and off the ice.

Naslund has been steadfast in his support and praise of Messier, telling NHL.com:

I think my biggest influence [was] Messier….watching him prepare for games and how seriously he still took everything at his age….a lot of the qualities that he had helped me get better.

It was a treat being around (Messier) for three years….not only me but the team owes him a lot from all the stuff he taught us….he’s going to go down as one of the all-time greats.

Unsurprisingly, both Daniel and Henrik Sedin have credited Naslund’s leadership for keeping them in Vancouver (when a permanent return to Sweden was seriously contemplated) and adjusting to leadership roles.

In that sense, without Messier’s presence, both Naslund and the Sedins’ legacies may be much different.

Messier also made a significant impact on the team’s dressing room and relationship with local media, encouraging accountability and respect. On Monday, The Province News Editor Paul Chapman shared an interesting perspective on Twitter:

@RobTheHockeyGuy @john40carter @JayVCB team was riddled with cliques and leaks to media. Guys would talk “off the record” all the time

@RobTheHockeyGuy @john40carter @JayVCB Whispers over the phone to fave media to further their agendas. Once Messier was here, that stopped.

There’s also an argument that Messier’s signing represented a concerted effort to establish Vancouver as a “free agent destination.” While the related succcess is certainly debatable, it’s difficult to praise Mike Gillis’ logic in signing Mats Sundin in 2008, while criticizing that of Messier in 1997.

Perhaps most importantly, Messier essentially serves as the template for modern leadership. As the namesake of the NHL’s annual leadership award (awarded to an individual who “leads by positive example through on-ice performance, motivation of team members and a dedication to community activities and charitable causes”), Messier’s imprint on the game is unavoidable and constant.

Messier also remains a figure that major companies seek to be associated with, amassing an array of endorsement deals including Lays, Rogers, Cold-FX and Can-Am, amongst others.

In other words, Vancouver’s interpretation of Messier is the anomaly. Though perpetually regarded as a villain in this market, labeling Messier accordingly is both shortsighted and ignorant. In fact, one could argue that his direct contributions (specifically off-ice) shifted the direction and fortunes of the franchise. That’s a far cry from someone who destroyed an organization.

And if that’s true, maybe Messier is simply a convenient scapegoat for a passionate, often uninformed fanbase, unhappy with its history and lack of success.

God knows he wouldn’t be alone in that role.