Vancouver’s celebrated Italian chef Pino Posteraro is welcoming Toronto food impresario Mark McEwan for an exciting collaborative dinner during the EAT! Vancouver festival. Posteraro, who will also be leading a shopping tour of Vancouver’s cherished Granville Island Public Market for a lunchtime demo at his Yaletown restaurant, Cioppino’s Mediterranean Grill + Enoteca, is local culinary legend and his restaurant continually hailed as one of the best in Vancouver.

Posteraro calls Vancouver a “micro gastronomical world,” where the locals, and chefs, have a special connection to the land and ocean, much like in Italy or France. For McEwan, who says he makes it out to Vancouver a couple of times a year––especially when conditions are good for skiing up at Whistler––agrees that Vancouverites are “very precise and energetic about food,” in part because of the city’s “natural habitat,” and our role as Canada’s ingredient “breadbasket.”

Connection to land, sea, our fresh air, and, in turn, the bounty they produce, is at the core of both chefs’ passion for fresh ingredients and cooking. Posteraro’s approach definitely emphasizes the “art” in culinary artistry: “My cooking is instinctive therefore I ‘feel’ the season, see the local food landscape and therefore create and paint into my plates,” the chef explains. 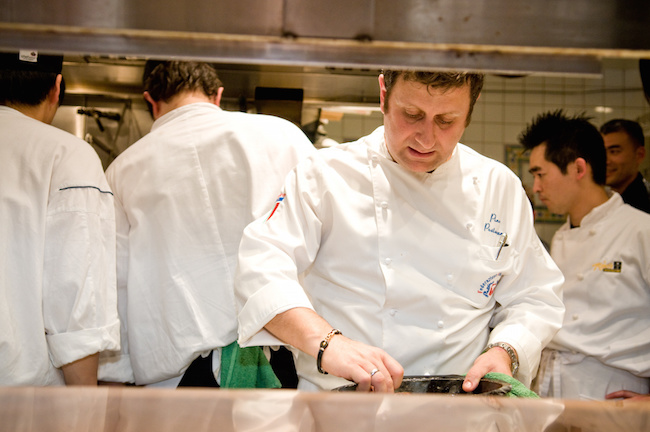 Posteraro at work (Photo via Cioppino’s)

Getting into the market, as Posteraro will be for his EAT! Vancouver hands-on workshop, is “very important,” he says, since it “dictates two essential aspects of cooking: freshness and seasonality of the ingredients.” To help home cooks navigate a market, Posteraro suggests inquiring if the vendors have “ethical and sound practices” for growing produce or raising meat.

That kind of conversation, points out McEwan, is part of what is typifying the new and ongoing dialogue about Canadian food. Now diners and consumers care about how farmers “cultivate [crops] and raise, feed, and slaughter their animals,” notes McEwan, who adds that these are the kinds of conversations that didn’t exist before, in a previous era of discussion of Canadian food beginning and ending with good old maple syrup.

Posteraro infuses his understanding of Canadian food with an immigrant’s pride: “Canadian Cuisine is a final result of conjunctive efforts of chefs, agriculturists, farmers, wine producers, [and] fishermen […] We have a great country and even first generation immigrants like myself have a strong sense of belonging and [are] proud to be part of it!”

The Canadian food landscape is shifting as it attempts to define itself, and McEwan describes our “very diverse” food scene as being centred around amazing product transformed with international technique–something at which both he and Posteraro excel in their Italian-Canadian cooking.

McEwan is a catch of the day kind of chef, with love for Vancouver’s fresh fish in season, but the chef also often works with beautiful east coast seafood, like Prince Edward Island’s bluefin tuna, lobsters, and oysters (and the Island’s beef program, too), and has a deep appreciation for Canada’s excellent core products, like the “amazing cheeses [and] really good wine” available coast to coast.

Posteraro says in order to achieve Cioppino’s signature West Coast-meets-Italian flavours, he brings his “enogastronomic luggage,” and his love of local ingredients, though he does import key items from Italy whose quality can’t be matched in Vancouver.

The two chefs have a complementary cooking style, which makes them an ideal pairing for the closing night meal of the EAT! Vancouver Dinner Series. McEwan hails the expanded week-long programming of the festival as “reflective of where people’s minds are today” when it comes to mainstream food culture. Food is what we “talk about, eat, and Instagram,” quips the chef.

For their collaborative dinner, McEwan says he and Posteraro are splitting the six-course menu evenly, with McEwan’s dishes mirroring items on the menu of his Toronto eatery Fabbrica. Posteraro and McEwan have not worked together behind a stove, but McEwan says he remembers Posteraro from his tenure in Toronto in the early 1990s. “Pino’s always been pretty bossy in the kitchen,” teases McEwan, adding heartfelt praise: “Pino’s food is straight ahead, honestly Italian, not overly fussy, unctuous, real and solid.”

McEwan is also looking forward to the chance to break up his usual routine that finds himself focusing on the business side of his many food endeavours, including a new Toronto market that’s opening up soon. A familiar face to many Canadians thanks to his popular television series, “The Heat,” which took viewers behind the scenes at North 44 Caters and his first McEwans grocery store, and his tenure as head judge on “Top Chef Canada,” McEwan’s passion isn’t fuelled by cameras, and he thinks celebrity chef culture is “pretty wacky.” 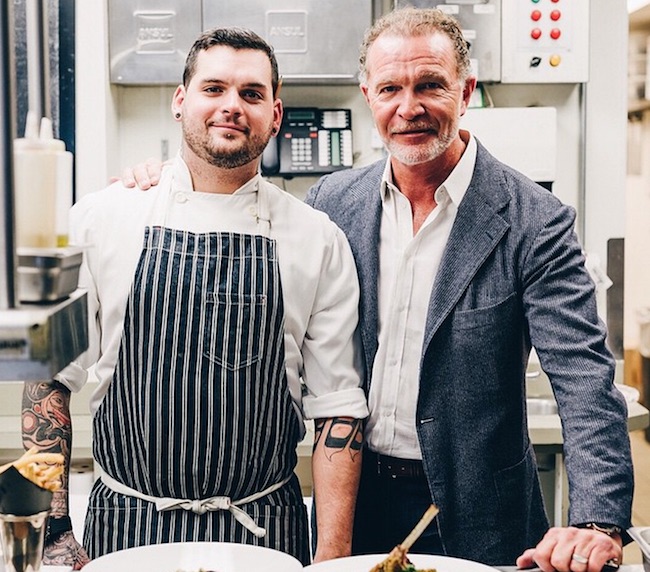 Of course, chefs do take some time out to eat what their colleagues are cooking, and when in Vancouver, McEwan says he likes to see what Chef David Hawksworth is up to, among others who are making best use of Vancouver’s ingredient bounty. Posteraro says he goes to Maenam and Tojo’s when he can, hailing Hidekazu Tojo as “a great leader of a true Japanese movement in the highest expression.”

A chef’s expression is on every plate he or she puts out, which is a truism for McEwan, who says he’s always reminding himself that cooking professionally is always about the client’s experience. “Cooking is complicated, but a simple science,” says McEwan. “The fundamentals are don’t forget who you are cooking for, and you’re as good as your last plate.”

Posteraro and McEwan’s plates can be enjoyed at their collaborative dinner as part of EAT! Vancouver on Sunday, May 3 at 6:30 p.m. Posteraro will also be facilitating a hands-on workshop that begins with a tour of the Granville Island Public Market and concludes with a demo and lunch at Cioppino’s on Tuesday, April 28 from 10 a.m. to 1 p.m.