With 38 years as a mariner, Chris Badger brings a wealth of experience in marine safety to the proposed Trans Mountain Expansion Project. The former Chief Operating Officer for Port Metro Vancouver sees the many benefits the Project would bring to Canada and sees working with Trans Mountain as an opportunity to use his extensive experience towards maintaining marine safety standards.

We sat down with Chris to talk about his role and what it takes to become a Master Mariner.

What is your background and how did you get involved with Trans Mountain?

I spent 15 years sailing deep sea and 23 years in port operations. I retired from the position of Chief Operating Officer with Port Metro Vancouver in 2011. When I retired I was asked if I would be willing to provide marine operations expertise to the Trans Mountain Expansion Project. I felt it was a good project that would benefit Canada, and in my dealings with Kinder Morgan Canada over the years, I found the company to be very professional and to have a strong social conscience, so I accepted.

Trans Mountain has been moving oil successfully through the Salish Sea from the Westridge Marine Terminal for more than 60 years. I believe this knowledge and track record will make the Trans Mountain Expansion Project the safest project on the West Coast for moving Canadian oil to market.

Tell us about your role as Master Mariner and how it relates to the Trans Mountain Expansion Project.

A Master Mariner is someone who holds an unlimited Master’s certificate, which means there is no limit on the size or geographical area that the person holding the certificate can command a commercial vessel. It is the highest level of qualification for mariners. Every tanker that calls at Westridge Marine Terminal is commanded by a Master Mariner, although my role with the Project is as a consultant, not actively on the vessels.

What does it take to become a Master Mariner?

About 10 years of your life. After three years in a naval training school, I went to sea at the age of 16 as a cadet. After about four years of training, which included sea time and college time, I took my first set of exams that allowed me to become a watch keeping officer. This meant I could be in charge of a bridge watch. After about three more years of working on ships, I was eligible to take the second set of exams. This allowed me to take the position of navigating officer.

Finally after another three years, I was eligible to take my Master Mariner exams, which once passed, meant I could command any commercial ship. In addition, for oil tankers you have to take a tanker endorsement qualification, which is specialized training in areas such as emergency procedures, terminal safety and pollution prevention.

How long have you lived in B.C. and why does marine safety matter to you?

I’ve lived in B.C. for 28 years, but my wife was born in Canada and so was my son. In fact my wife can trace her roots in B.C. back to the 1850s when her great, great grandfather Adam Grant Horne opened the first Hudson’s Bay trading store in Nanaimo.

We live in South Nanaimo and spend time every year sailing the Gulf Islands, the Salish Sea and Desolation Sound. We also used to do a lot of scuba diving in the area when we were younger. The ocean is where I have worked and played for almost my whole life. It’s how I’ve defined myself. Using the experience I’ve gained to ensure the marine safety standard in B.C. remains world-class is important to me. It’s a way to give back for the amazing life B.C. has given to me and my family.

Tell us about the investment in marine safety that would take place if the proposed pipeline proceeds?

Included as part of the Trans Mountain Expansion Project will be a $100 million investment in new marine oil spill response capabilities including five new bases in southern B.C., 100 new staff and more vessels and equipment. This equipment will not just be available for oil tankers, but for any vessel calling in B.C. waters. These new resources will help reduce emergency response times by half.

What do you want people to know about marine safety and response?

B.C. has over 60 years of experience in tanker operations without an accident, and with a commitment to continuous improvement, operations are getting safer and safer. The world will continue to need oil for many years to come, and B.C. can be proud of the fact that it is among the safest places in the world to transport it. 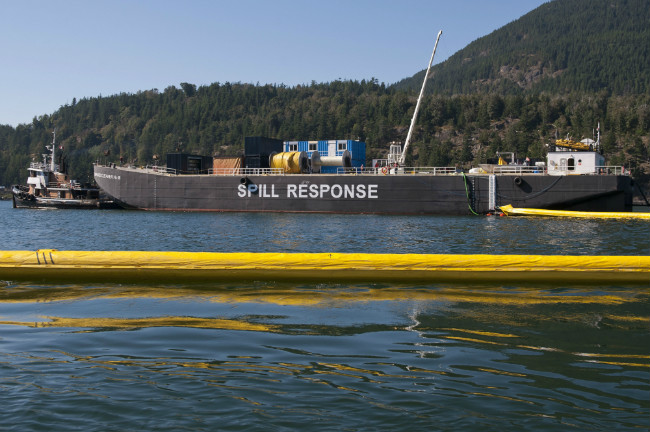