Update: Project has a 95% chance of going through

About a year ago this development proposal, known as Marine Gateway (at Marine and Cambie, next to the Canada Line station), was brought forward to the City of Vancouver. At the time city staff was against a residential, office and retail complex on land currently designated for industrial use. However, city councilors seem to be in favour of the project. It still may not happen but the developer PCI has come up with a great new proposal that may be hard to say no too and at the same time provide a catalyst for density the tail end of the Cambie corridor.

The development proposal has been significantly updated as can be seen from the photo above. It now includes a 15 floor office tower nearing 300 ft, along with a 35 storey residential tower nearing 400 ft (which will have a significant portion allocated to rental units). The plan also includes a new movie theatre, one sorely needed in that part of the city as Oakridge just doesn’t cut it and a grocery store. Here is a photo of the old proposal. 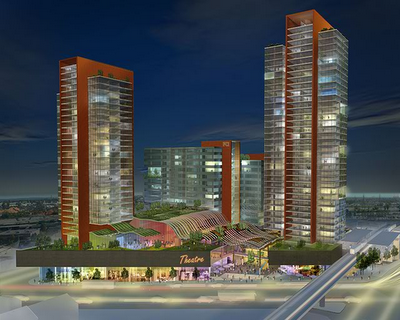 Here is another photo of the revised proposal, which, is a lot sleeker and taller and much more reminiscent of what we have gotten used to it in Vancouver. Both proposals were good, however, I’m a sucker for tall buildings so I like the new one better. 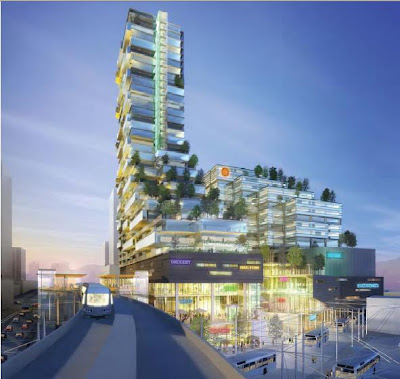 Will this project get the green light? I sure hope so because whenever I look at that station I can’t help to think what a waste of space that is right now. It will also be interesting to see if the city approves a 420 foot tower in an area that for the time being is primarily low rise and low density.