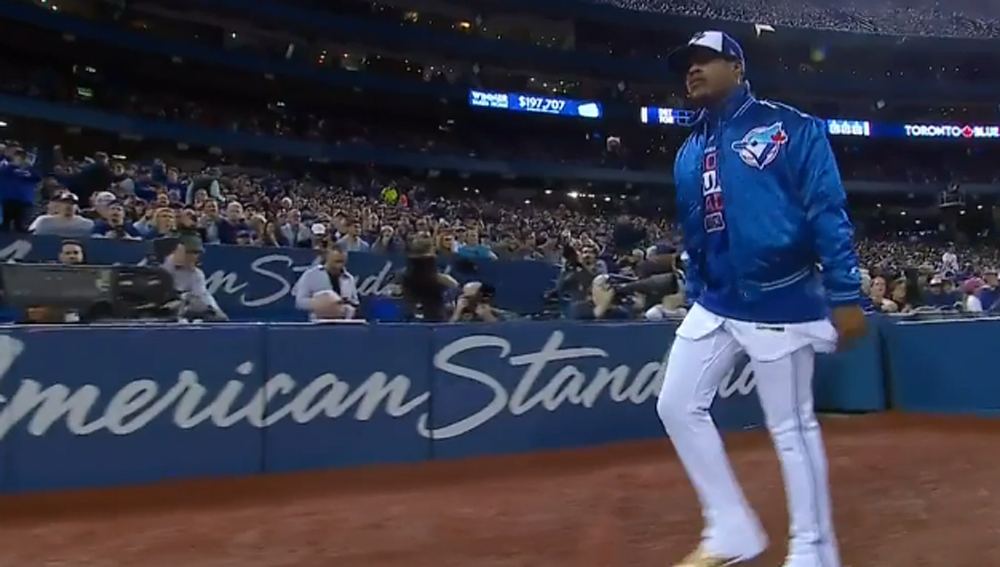 Marcus Stroman made a statement in more ways than one on Opening Day. Not only was he dominant on the mound, but he also made a pre-game fashion statement.

The talk of the game itself was how both starting pitchers took a no-hitter into the sixth inning. Yet, Stroman also had fans buzzing about the choice of his pre-game jacket; a homage to the glory days of the early 90s Toronto Blue Jays.

Prior to taking to the mound in front of the 45,048 fans in attendance at the Rogers Centre, the Stro Show strolled into the dugout wearing this retro Blue Jays starter jacket.

Stroman dug up one of the most beloved logo designs in Blue Jays history; the retro Blue Jays logo design on the classic blue jacket. In case you’re wondering where he got the jacket from, it looks like it’s from his own personal collection.

For anyone looking to get their hands on the very jacket that Stroman had, eagle eye shoppers may uncover some Blue Jays buried treasure at a local Winners or Marshall’s stores.

Not sure how this is even possible, but I found an old school Blue Jays Starter jacket at Marshalls. My impulsive side wants to take it home immediately. pic.twitter.com/VcB7XlQiN1

Fun fact: This isn’t the first time that Stroman has gone into the vault to resurrect an old piece of Blue Jays paraphernalia. During Jose Bautista’s final home game as a Blue Jay back in 2017, Stroman unearthed Bautista’s number 19 jersey from the heyday of “Joey Bats.”

Ultimately, the Blue Jays lost their Home Opener by a score of 2-0 to the Detroit Tigers. An extra-innings home run by Christin Stewart off Daniel Hudson sealed the fate of the game. The Blue Jays have now lost their last eight consecutive Home Openers.

The offence was nonexistent for the Blue Jays, but thanks to a very slick retro jacket worn by Stroman, at least the team looked cool in their losing effort.