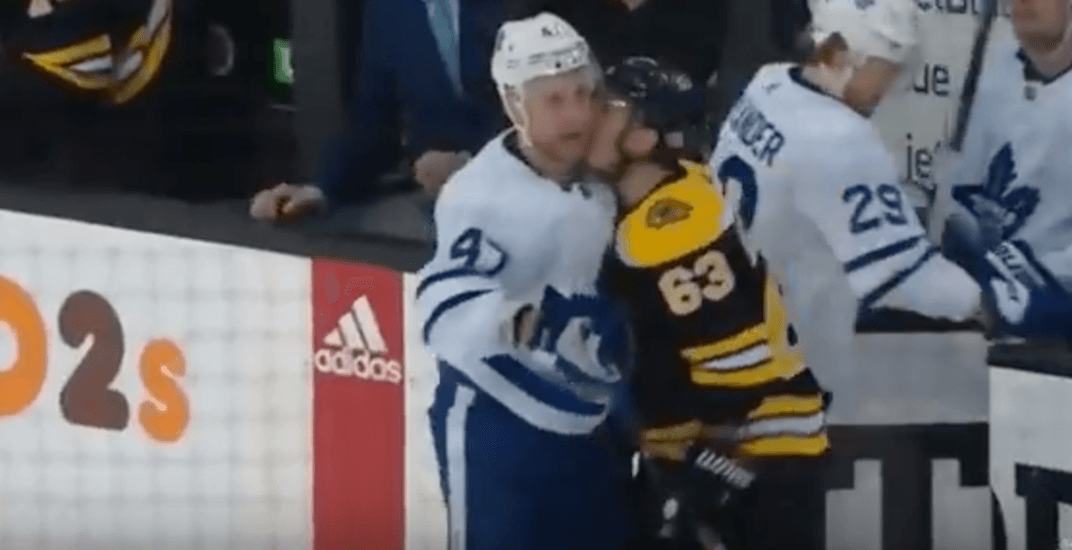 There’s no licking in hockey…

The Maple Leafs took a licking in Game 1 of their first round matchup against the Boston Bruins on Thursday, losing 5-1.

They also literally got licked – with tongue and all.

Bruins forward Brad Marchand was the culprit – shocking, I know – as he licked Toronto’s Leo Komarov in the first period.

Marchand was essentially trying to take their relationship to the next level, after giving Komarov a kiss back in December.

Brad Marchand is just trying to show Leo Komarov how much he loves the #StanleyCup playoffs 💋 pic.twitter.com/wLLARBs60z

Komarov didn’t seem bothered by Marchand’s antics, and did a good job of ignoring him.

Leo Komarov didn't want to get into the Marchand kiss, round II:

"Honestly, I don't know what happened & it doesn't really matter either. It's a new game Saturday & we go from there."

“That was weird. That was very weird to me,” said Nazem Kadri on the incident. “It’s certainly uncomfortable to watch.”

“He keeps trying to get close to me,” Marchand told reporters after the game when asked what makes him want to cuddle with Komarov so much. “I don’t know if he’s got a thing for me or what. He’s cute.”

Oh ok – so Brad Marchand can lick an NHL player’s neck & it’s no big thing but when I do it I “lack self control & good decision making skills” & “need to leave the arena immediately”? This is WEAK.