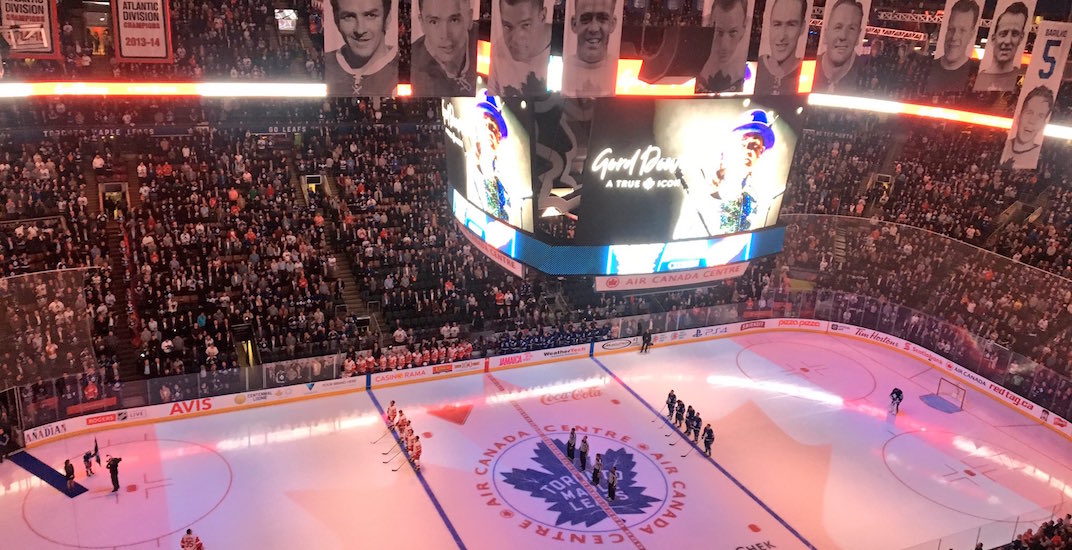 News of the Tragically Hip frontman’s death was sad for many, given how much he meant to Canada. The Kingston, Ontario band sang many songs about our country, and that included many lyrics about Canada’s national winter sport.

Hockey and the Hip went hand in hand, so it was appropriate that the Toronto Maple Leafs had a home game scheduled for Wednesday night. The team paid tribute to the Canadian icon, doing so in a most appropriate way.

The #leafs lowered the Bill Barilko banner tonight in honour of Gord Downie. It was the only one left up during the Hip’s last ACC shows. pic.twitter.com/erYiZAaG6f

The gesture was a nod to one of the Hip’s most popular songs, 50 Mission Cap.

Barilko’s No. 5 jersey has been retired by the Maple Leafs since 1951, after he died tragically in a plane crash. The last goal he ever scored won the Leafs the Cup.

That tragic story helped the band write one of their most famous songs. For those unfamiliar with the lyrics to 50 Mission Cap, here’s how the song begins:

The Barilko banner was the only banner left up during the Tragically Hip’s final concerts at the ACC last year.

“Gord, you will live forever in the hearts of all Canadians.”

“Last night, we lost the beloved frontman of our nation,” the Air Canada Centre’s public address announcer said prior to puck drop. “A troubadour, storyteller, and courageous icon, Gord Downie personified what it means to be Canadian, composing the soundtrack for our country. Gord, you will live forever in the hearts of all Canadians.”