On November 7th, 2013, the Burnaby RCMP received a report of a male entering a ground floor apartment and committing an indecent act.

At approximately 9:30 p.m. the male entered an unlocked ground floor apartment in the 6100 block of Willingdon Avenue. Two women were in the apartment at the time and the male proceeded to put his hand down his pants and touch himself. The male did not physically touch the women and subsequently left.

The male is described as Caucasian, approximately 6 feet tall, with short black hair, a black goatee, and was wearing a black hooded sweatshirt with a fur lined hood and grey sweat pants at the time of the incident.

“Police have increased patrols in the area and are working diligently to identify this male” said Corporal Lea-Anne Dunlop of the Burnaby RCMP. “The public is asked to be vigilant and report any suspicious activity to police right away”.

Since November 1st, reports were received of a suspicious male loitering on the patio areas of first floor apartments in south-west Burnaby where no entry was gained. It is unknown at this time if the suspect in the latest incident is related to the suspicious activity. 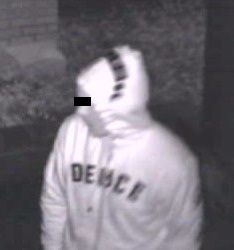 If you arrive home and find that someone has has entered your property or your home, immediately leave and call 911.

Time and again, the most effective means to keep a neighbourhood safe is to remain observant of irregular activity and report that activity to police. Anything suspicious can be reported to the Burnaby RCMP non emergency line at 604-294-7922. Crimes in progress should be reported immediately to 911.