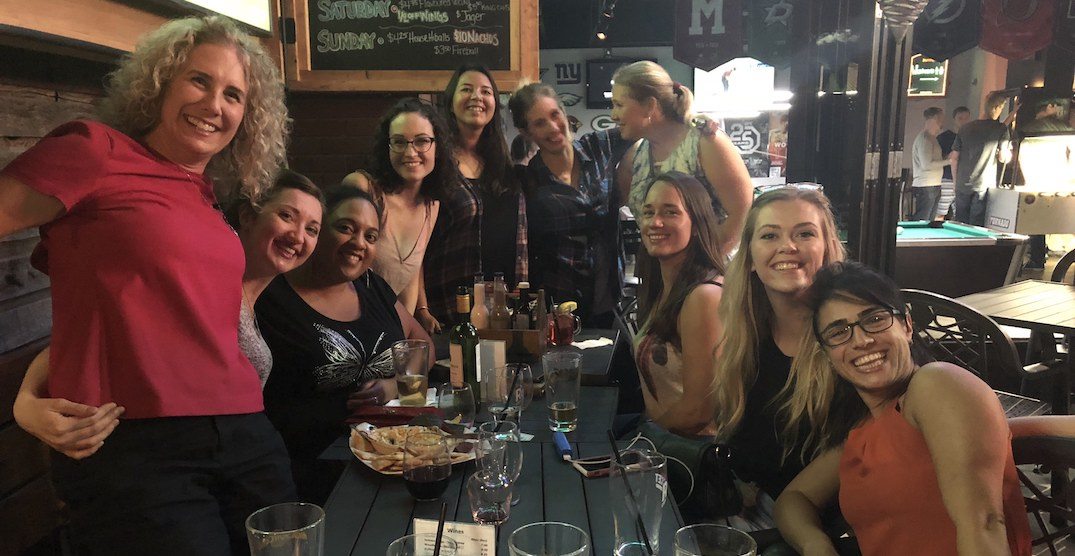 The Nicole meet up (Courtesy of Nicole Thompson)

246 women at the University of Calgary received an email notification around 11 am on Friday.

The subject line read: “Met you last night and you gave me the wrong number,” and had been sent to all the Nicoles, Nickys, and Nicolinas with a U of C email address.

The email was from a first-year student named Carlos, who had met a woman named Nicole the previous night, walked her and her friend home, and received what he would later discover to be the wrong phone number. 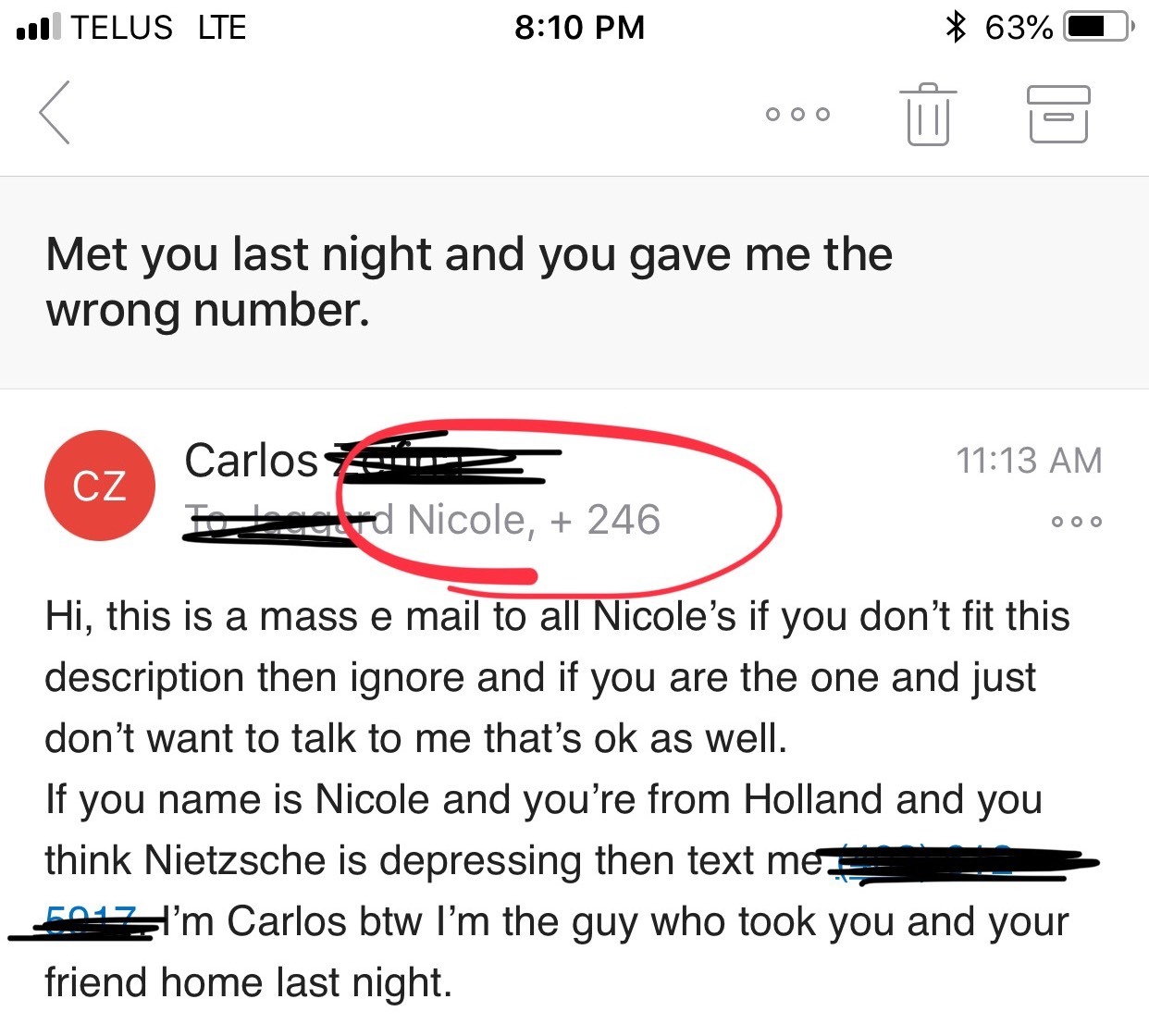 The email message sent to 246 Nicoles (Courtesy of Nicole Thompson)

Nicole Thompson, a final-year medical student at U of C (not the Nicole that Carlos had met on Thursday night) was one of the Nicoles who received the email on Friday.

“I read this email and I thought ‘this is hilarious,'” Thompson said in a phone interview with Daily Hive, “I didn’t know if I should delete it because it wasn’t for me.”

However, Thompson soon began getting emails from some of the other Nicoles on the email chain, as each person had been CC’d to the original message.

“All of a sudden all of these emails start rolling in. 90 or so emails go back and forth.”

Thompson said that someone suggested that the Nicoles meet up, and, after a Facebook group titled ‘Nicole From Last Night‘ was created, the plans were set for that night.

Just 11 hours after the mass email had been sent, a group of similarly-named women met up for some drinks at a nearby pub.

“We had a bunch of drinks, it was so much fun,” Thompson said. “It’s actually a super cool group of people.”

She said that while the women were meeting one another a message came into the Facebook group from what appeared to be the ‘Real’ Nicole. 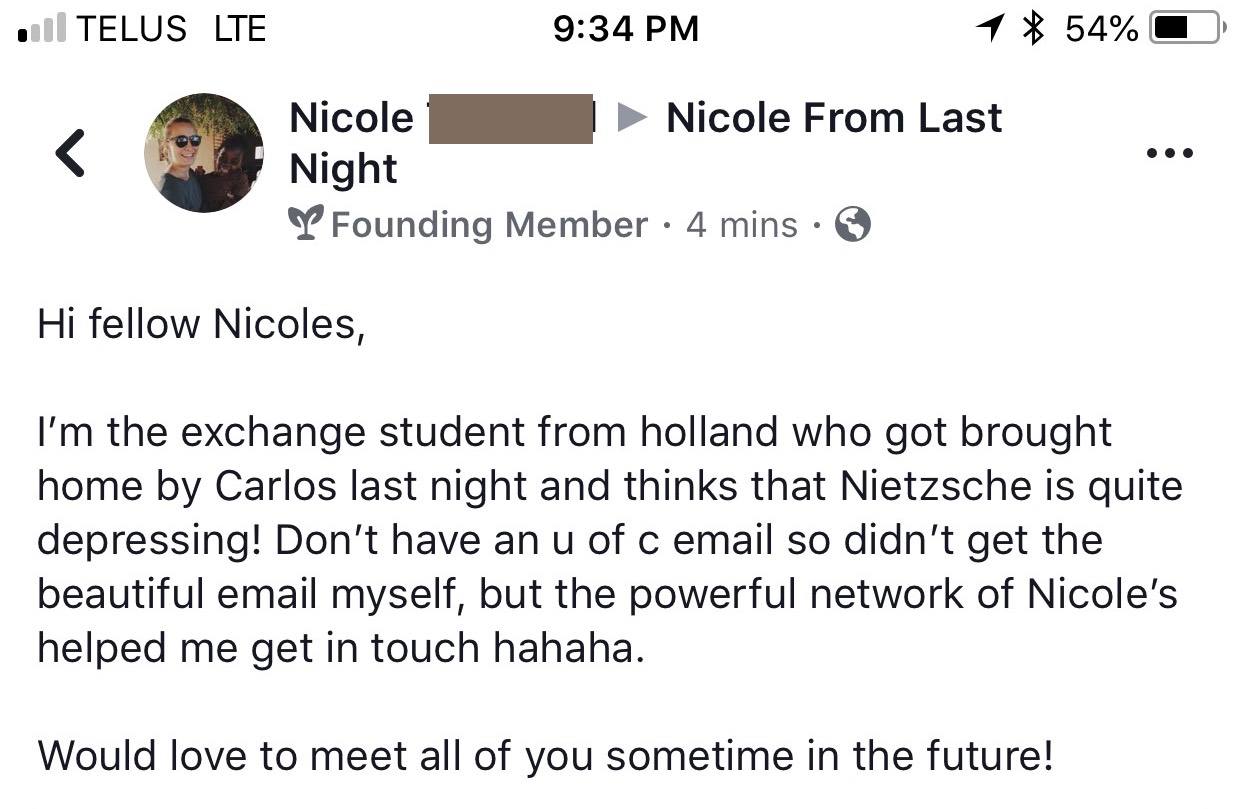 The “Real” Nicole contacting the group (Nicole From Last Night/Facebook)

It turned out that Nicole had actually given Carlos the wrong number by accident, but didn’t have a U of C email account so she hadn’t even received the initial message — it was only through the other Nicoles that she knew of the situation.

Thompson said that Carlos had left his phone number in the email he sent to 246 people, so she was quick to contact him after it was discovered that it had actually been an accidental wrong number.

“That was one thing we were really cautious about, [not contacting him] until we found out who this girl really was and whether or not she intended to do this.”

“I text Carlos saying ‘listen, we found your girl,'” and he was like ‘You’re kidding me,'” she said.

According to Thompson, Carlos had no idea about the group of Nicoles that he had accidentally gathered together with his email, but was happy to have been reconnected with the woman he met on Thursday.

“I think he really just didn’t even realize, he seemed so innocent,” Thompson said, “he was like ‘well, I didn’t want her to think I was a jerk because I didn’t text her.'”