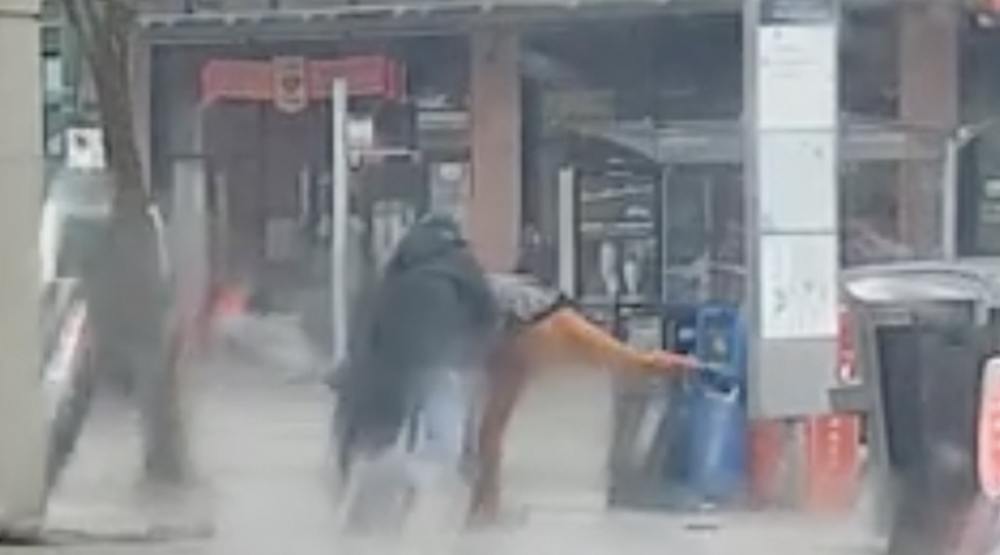 A screngrab from the assault video.

Vancouver police are investigating a violent incident in which they say a man was “allegedly assaulted “after exchanging words with another man at around 1 pm on Thursday, March 2.

The incident, which took place on Main Street, was captured on camera by a passerby. The video shows the alleged attacker grabbing the victim in a headlock, before swinging him around and throwing punches.

Ray Hsu, who is a poet and UBC Professor, posted the video to his Facebook page with the description: “Content warning: me getting punched a few times in the head by a stranger at Main and King Edward this afternoon.”

As of Friday afternoon, the video had been viewed more than 39,000 times and had 469 shares.

Hsu wrote he “kept yelling for help” but most people walked away. He suffered minor injuries and was attended to by the Vancouver Fire and Rescue Service.

Police said they are reviewing images of the incident from a number of sources.

“The investigation is ongoing,” VPD Staff Sgt. Randy Fincham told Daily Hive. “The suspect has not yet been arrested, and investigators are encouraging him to contact police to share his side of the incident.”

Reflecting on the incident, Hsu wrote on Facebook that “physically I feel OK, but probably because of adrenaline. My head aches where he hit me and I’ve got a shiner. The part that hurts more, emotionally, is that witnesses walked away when I was calling for help.”

Hsu adds that is he is grateful though, for the witness who captured the incident on film and shared his information with Hsu.

The assault was one of a number of incidents that took place on Thursday, but Fincham said at this point, this one in particular “does not appear to be related to four earlier assaults in the Cambie Street and West Broadway area.”