The king of tropical textures and soulful rhythms, Goldroom returns to Vancouver this month for a New Year’s Eve show at the Electric Owl. The LA-based DJ/producer, aka Josh Legg, is known for his original tracks along with massive remixes (for Niki & The Dove, MS MR, and MØ) that keep you dancing until sunrise. In the wake of the nu-disco movement, Goldroom is at the forefront, and he’s recognized globally for his talent. Often on tour, he has taken over small venues and stages at music festivals. With his upcoming DJ set at the Owl, Legg takes some time off his current tour to let us know more about the magic behind Goldroom.

How long have you been DJing & producing?
I didn’t really know it but I was “producing” basically as soon as I started writing songs. Even in middle school I was using a 4 track to record my songs, trying to make them sound as good as possible. It was a long road to having a studio and working primarily in electronic music, but producing has been a part of my musical life for as long as I’ve been writing songs.

As for DJing, that came up as an opportunity more than something I actively pursued. I started DJing around 2008 because people had started to ask my band NightWaves to DJ their party. It didn’t take long to figure out that I really loved it.

How do you like to describe your music?
I don’t really like to describe my music (haha). I have a hard time with that because I feel like every song comes from such a different place. I definitely set out with a goal at the beginning of Goldroom to make dance music, using modern production techniques, but using as much live instrumentation as possible. I loved what Fred Falke and Alan Braxe had done together, and I wanted to try and update that for the 2010’s and to really write meaningful songs with that backplate. Everything I’ve released has come out of that basic framework. Hopefully when people hear my music words like cinematic, emotional, or euphoric come to mind.

Who – or what- are some of your major influences?
Songwriters like Tom Petty, Phil Collins, Prince and others are definitely my biggest influences. The thing that really unites the artists that transcend time and place are the ones whose focus is really on writing great songs. Genres, trends, and fads come and go. A great song can work in any genre and at any time. For me I love making the kind of music that I make, but what I really want to do is to write timeless songs…. ones I can play acoustically on guitar and have them still stand up.

You went from solo DJ’ing to performing with a live band, how did that transition come about?
I’ve always known that I wanted to perform Goldroom stuff live with a full band. The music was always made with a live show in mind. Finding the people to play in the band was definitely the difficult part! I’ve had the pleasure of playing with some really talented people who’ve become some of my best friends though. Shout out to our drummer Nick Sandler, Mike Goldman who has played bass and keys for us, Mereki Beach, who sang on our first tour, and Chela, who came out with us in 2014.

At the end of the day, if I’m performing as Goldroom, my biggest goal is to perform my music in the best way possible. Connecting with people over the songs is what is truly rewarding about the process, and doing that with the live show is way more powerful. There’s something special about playing guitar and singing your song for someone. It’s magic.

What were some of your favourite music in 2014?
I loved Ryan Adams’ new record. Redinho’s record is amazing as well. I’m with everyone else in the world in completely drooling over D’Angelo’s new album. I’m listening to it right now!

What do you think of Vancouver? Playing here?
I’ve always been shown a lot of love in the city, so anytime I can come back I’m really excited! My first touring experience was in Vancouver actually. I remember going to a moon party in the park with Pat Lok a couple of shows back. It was a pretty surreal night and it really made me want to spend more time in the city.

How do you feel about playing a NYE show here?
Coming for New Years, and to play with some of my friends is a really exciting opportunity. Can’t wait!

What’s in store for Goldroom in 2015?
I’m finishing up my first full length album, which will be out in 2015 for sure. I can’t wait to share all of the songs I’ve been working so hard on the last 2 years! 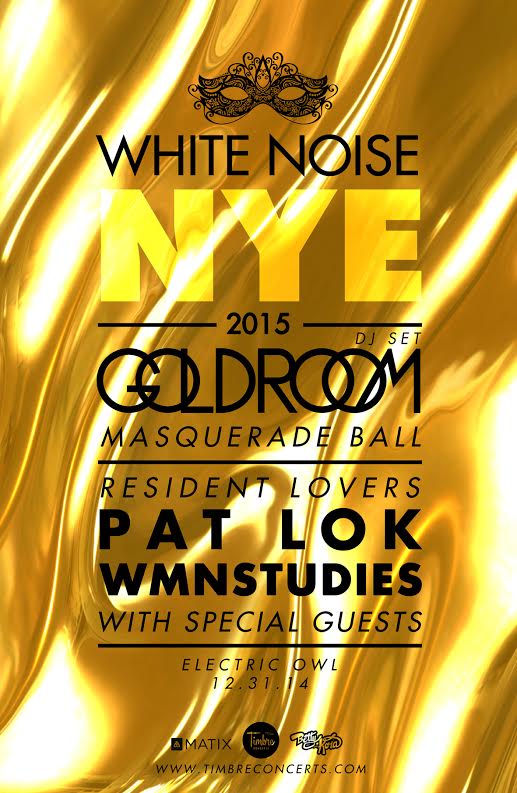