UPDATE at 2:45 p.m.: Power has been restored to the affected areas.

A large swath of downtown Vancouver is without power early this afternoon due to a motor vehicle accident.

According to B.C. Hydro, the outage began at 12:21 p.m. when a vehicle hit a power pole, knocking out a transformer. About 800 customers are affected in Gastown and Yaletown, an area spanning west of Carrall Street, north of Pacific Street, south of West Pender Street and east of Hornby Street.

Crews with B.C. Hydro are working to restore power as soon as possible.

B.C. Place Stadium is not affected by the outage. The stadium is scheduled to host the first two of nine Vancouver matches for the FIFA Women’s World Cup beginning later this afternoon.

Due to an accident. Half of Gastown has no power and we are forced to close for the day. pic.twitter.com/qCl19rM0zk

Gastown power outage centred around Abbott/Pender. Rumour has it a transformer got a little sparky. pic.twitter.com/gEmciQnpTQ

Stop lights out in yaletown and downtown cambie and hamilton and west Georgia. Be careful! 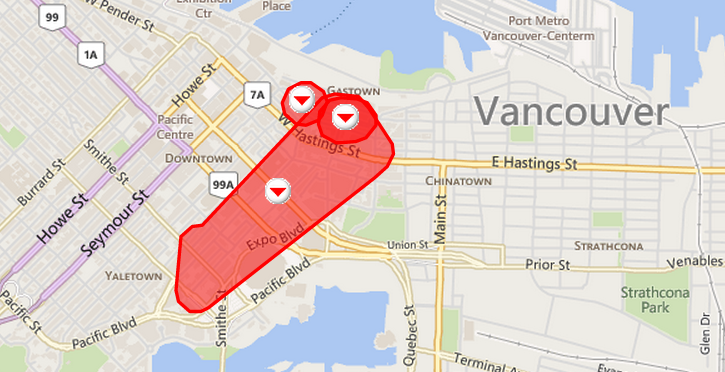