This March, Vancouver Opera sweeps back onto the city stage with the beautiful and utterly heart-wrenching Madama Butterfly. The tragically romantic tale, one of the world’s most popular operas, runs from March 5 to 13, 2016 at the Queen Elizabeth Theatre.

Set in Nagasaki at the turn of the 20th century, Madama Butterfly opens by introducing audiences to Pinkerton, a pleasure-seeking American naval officer who marries a young geisha in an exquisite ceremony. Despite the gorgeous love duet, Pinkerton’s infatuation with his ‘Butterfly’ is only fleeting – and he soon abandons his bride.

Act II resumes their story three years later when Pinkerton returns to claim their child from Butterfly, who has remained faithful and committed during his absence. When the depth of his betrayal becomes clear, Butterfly is devastated and commits a heart-breaking act of supreme sacrifice.

Composed by Giacomo Puccini in 1904, this opera remained his personal favourite throughout the remainder of his life. Today, Madama Butterfly is a staple of opera companies around the world, renowned in equal parts for its beautiful music and moving narrative.

Vancouver Opera’s upcoming staging is true to its original roots, set in an expansive home of rice paper walls that open onto a cherry orchard in bloom. As the cast sings in the original Italian, an English translation is projected above the stage through SURTITLES, a Canadian creation now widely used by the international community. 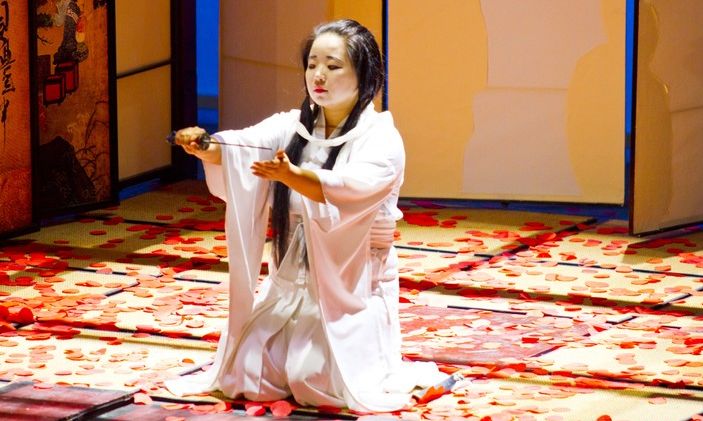 Two internationally acclaimed artists will bring life to the complex Butterfly. On March 5, 10 and 12, it will be Mihoko Kinoshita – a leading interpreter of the role who has performed in Sofia, Belgrade, Syracuse, and London’s Royal Albert Hall, among others. On March 6, 11 and 13, Vienna-based soprano Jee Hye Han will embody the tragic figure. The artist made her North American debut as Butterfly only last April, when Pacific Opera Victoria enlisted her to step in after a surprise cancellation.

With Vancouver Opera’s Get O.U.T. (Opera Under Thirty-Five) program, young adults are able to experience the productions for just $35. Tickets can be purchased using a special promo code released on VO’s Facebook and Twitter roughly two weeks before opening – but they go fast!

Inside tip: Check VO’s social media at 9 a.m. on Friday February 19 – you’ll be able to have the first crack at Get O.U.T. tickets!

For more information and to get tickets, visit vancouveropera.ca.