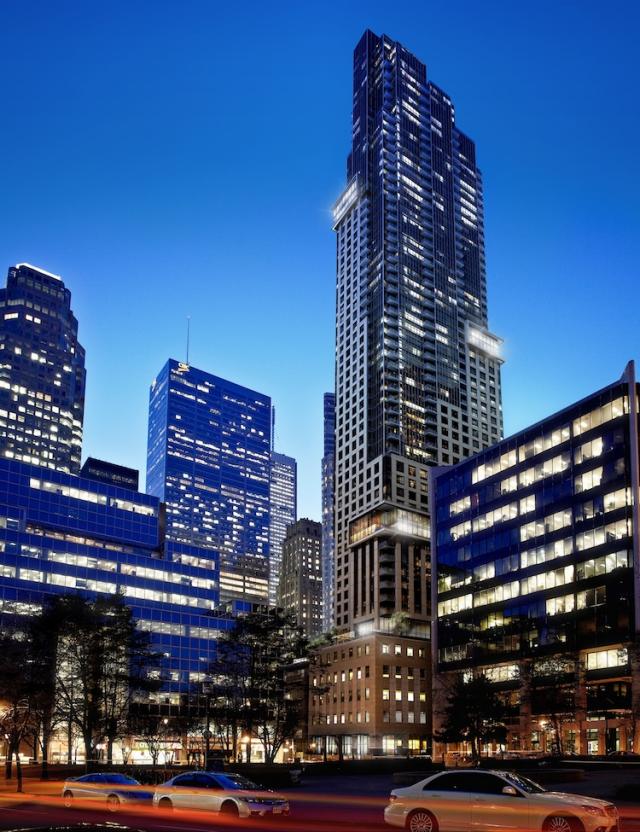 Where can you get macarons in Vancouver that have Hello Kitty shaped shells or cherry blossom decorations? Can’t think? That’s because sometimes the best things are kept hidden. Macarons from Kawaii Eats are one of them. Kawaii Eats isn’t a store, but you may have seen the cutest macarons popping up at farmers markets or craft fairs around Vancouver.

Melany is the master behind these creative and tasty macarons at Kawaii Eats. For those who don’t know what “kawaii” means, it is the Japanese word for “cute.” Melany discovered a passion for baking after university and enrolled in the Pacific Institute for Culinary Arts. In 2011, Melany sold her macarons at a Baker’s Market in 2011. Now, she visits various craft fairs and markets a month. 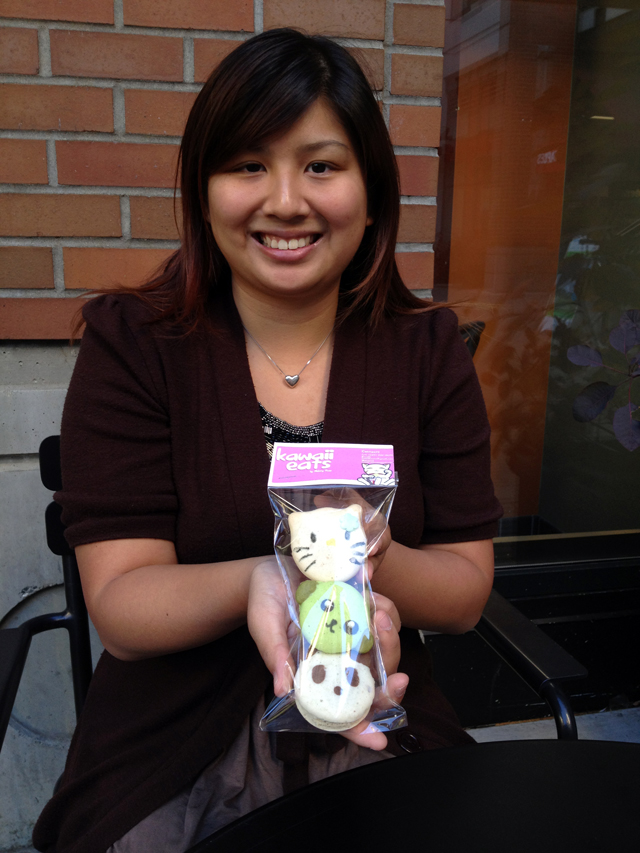 A popular triple pack of macarons is the Kawaii Pack. This pack consists of a Hello Kitty macaron, Mameshiba (bean dog, a popular cartoon in Japan) macaron, and a “Panda-ron.” The Hello Kitty macaron consists of a raspberry buttercream, the Mameshiba macaron has a green tea buttercream, and the Pandaron has a dark chocolate and orange blossom ganache. 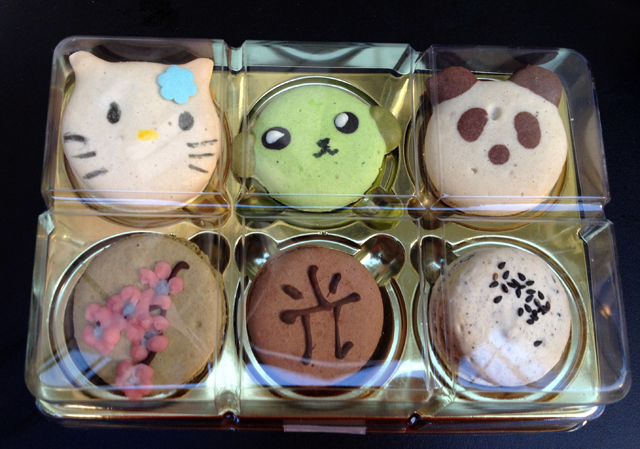 Melany not only let me sample her Kawaii pack of macarons, but also her Kyoto Pack, which is seen in the bottom row (of above picture.) The Kyoto pack definitely have an essence of Japanese culture. The cherry blossom macaron has a green tea, white chocolate, and yuzu ganache. The middle macaron with the word “light” in Chinese has a chocolate nutella buttercream. The last macaron on the right has a black sesame and red bean buttercream.

Not only are the aesthetics of the macarons unique, but the flavours are too. Each macaron costs $2, a pack of three is $6 and 2 packs for $10. 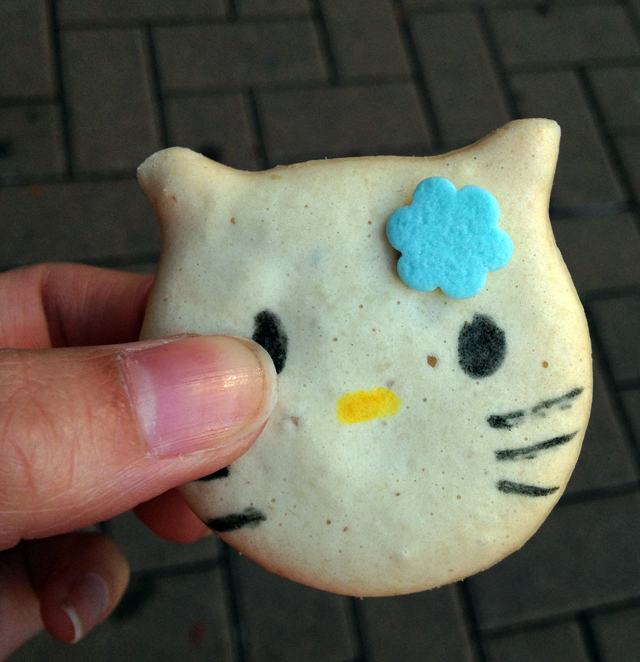 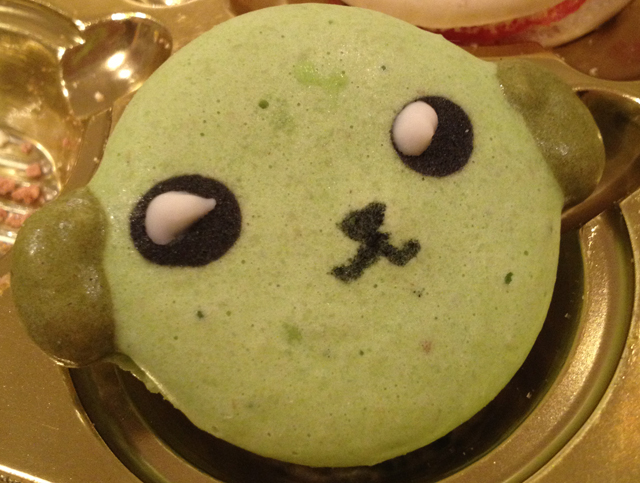 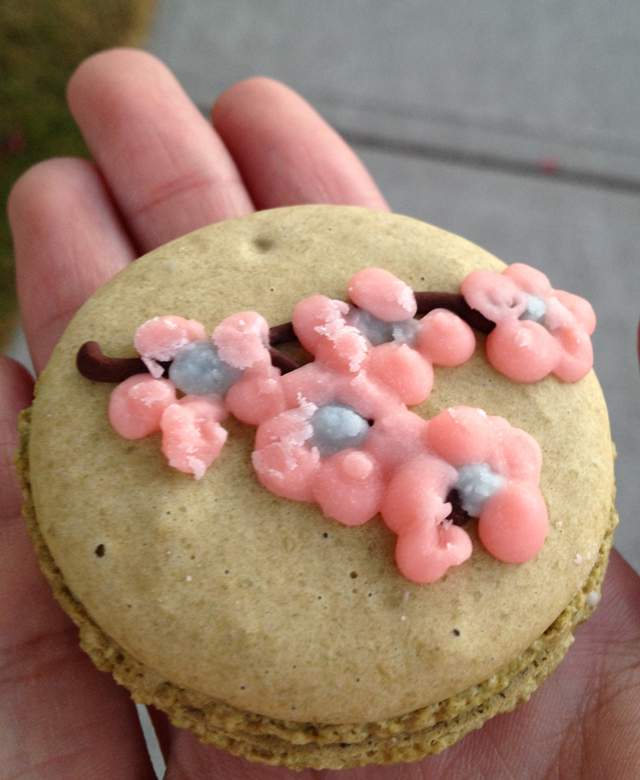 Did you know the back of the Panda-ron had a tail?

Note the detail put into each macaron. Not only are the flavours unique and tasty, the aesthetic value of the macarons are incomparable.It is evident that a great amount of detail is  put in these macarons. My personal favourite of the macaron was the Mameshiba macaron. It had a burst of authentic green tea flavour, similar to green tea at a Japanese restaurant. It tasted exactly what I wanted to be. 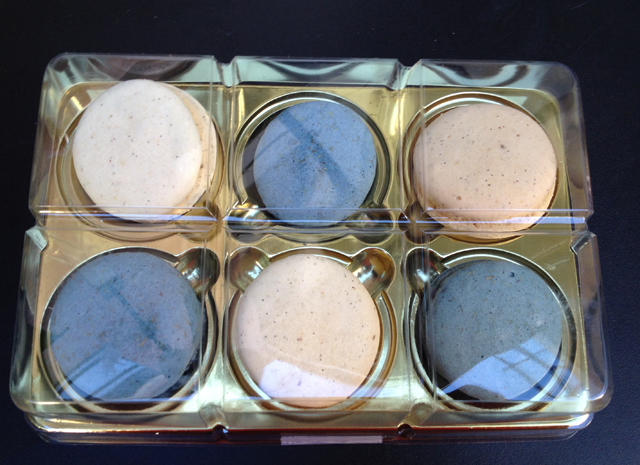 Melany also does custom macarons and cakes as well (prices vary.) Check out these pictures of Kawaii Eats’ other creations. 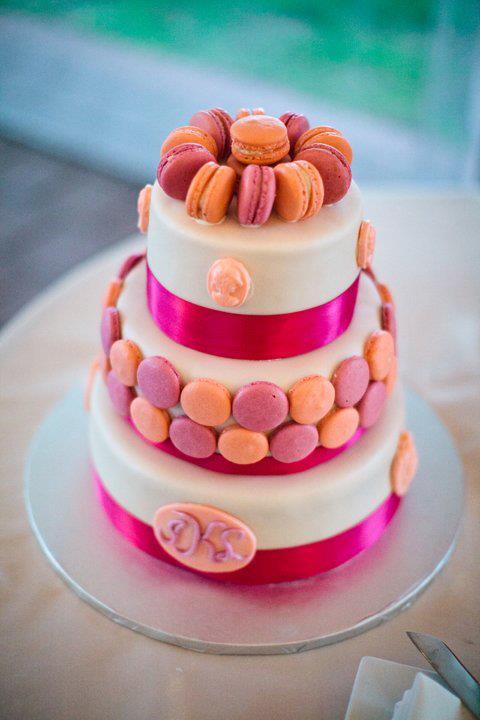 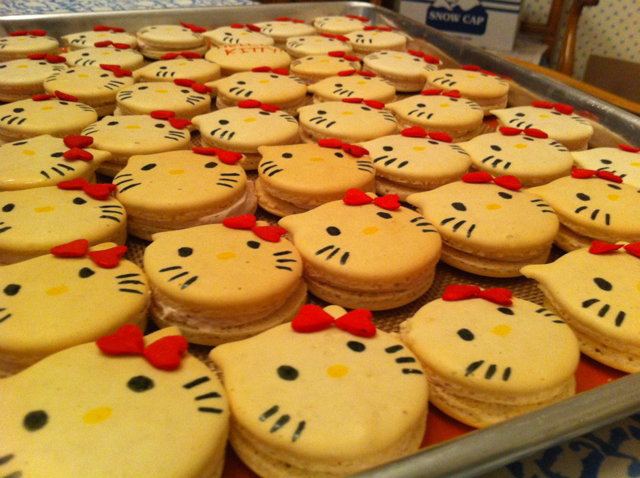 The Halloween pack of macarons, called “Spook-a-rons” are sold at during the time near Halloween. The Black Cat macaron has a dark chocolate and chilly flavour. The pumpkin pie macaron has a pumpkin buttercream, and this one does not contain nuts. However, it is made in a non-nut free facility, but people who are not extremely allergic can enjoy this nut free macaron. The last macaron, the Ghostly macaron is vanilla flavoured. 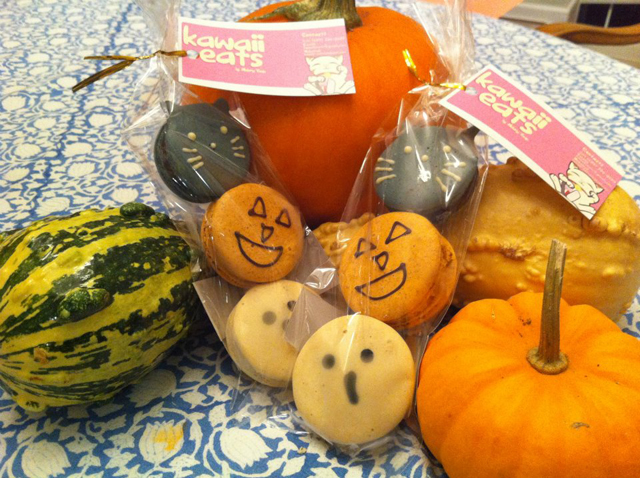 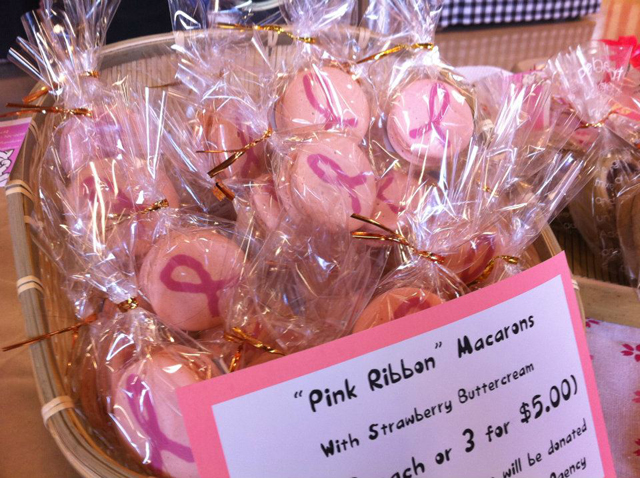 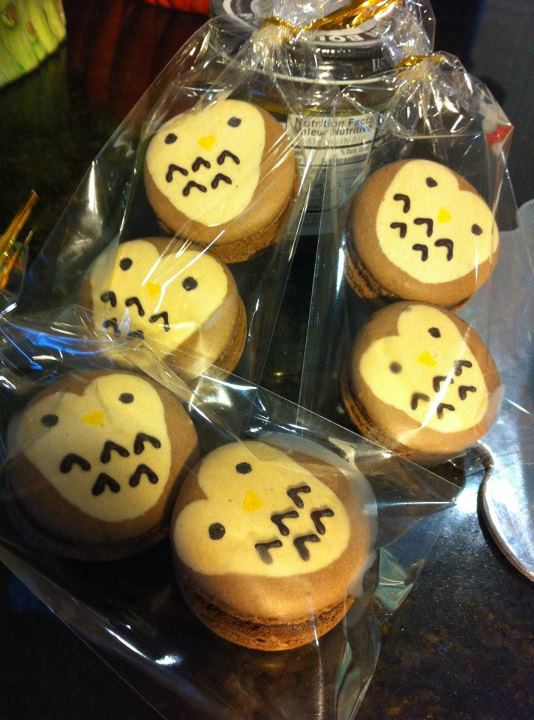 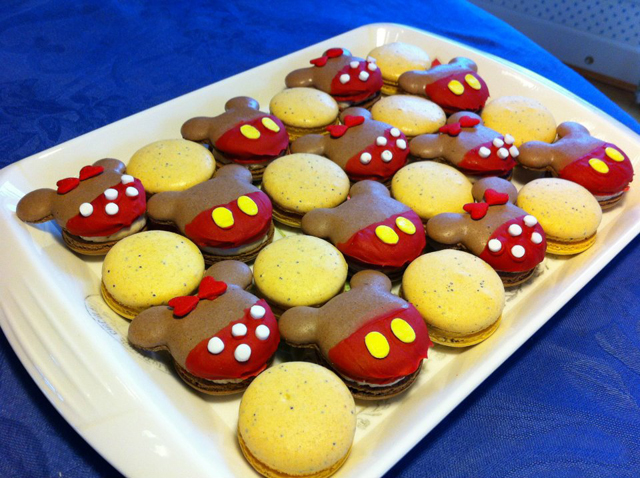 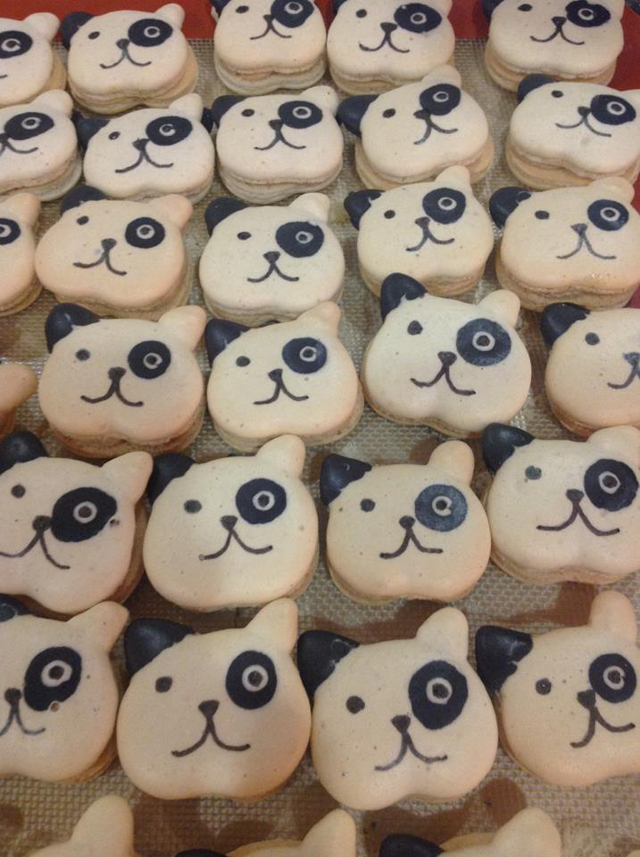 Melany’s macarons scream “Kawaii!” at me when I’m just looking at them.No where else in the Lower Mainland can you get such cute and unique macarons.

Mark your calenders to remember when to purchase them! She will be selling these macarons at local craft fairs and markets on these confirmed dates:

When: November 8-11
What: Make It! – Craft & Art Fair a
Where: Croation Cultural Centre, 3250 Commercial Drive

Pictures (unless otherwise stated) and Article by: Whitney Hong, (@wheetnee) Blogger of WandsAndPliers