March 20 is Macaron Day, and Vancouver is ready to celebrate the delicate confection.

“Le Jour du Macaron” was started in 2005 in Paris by pastry chef Pierre Hermé, and the tradition continues on around the world.

In Vancouver, several cafés and bakeries specializing in macarons are having special events in honour of Macaron Day, many of which include a charitable component. Here is how you can celebrate Macaron Day 2016 in the city, and eat beautiful, delicious macaron for a cause. 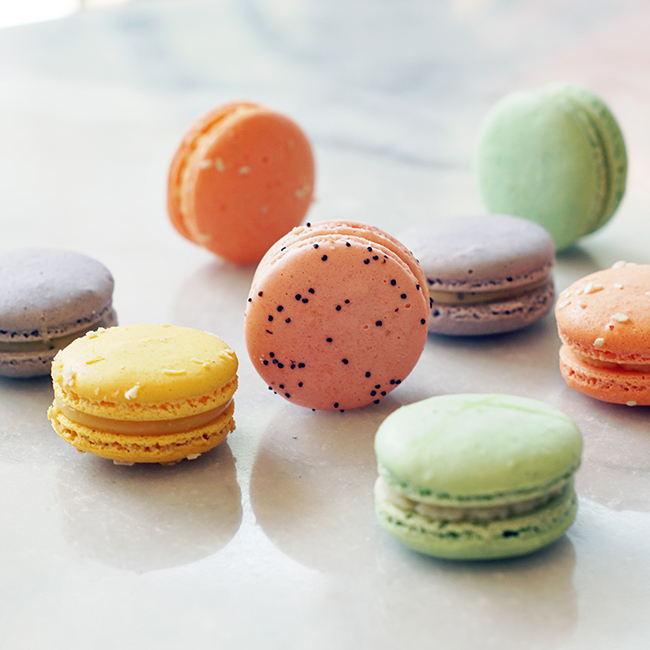 For Macaron Day, Faubourg will offer its signature Parisian-style macarons for $1 each (half off the regular price), match every dollar of macaron sales and donate 100% of gross proceeds to BC Cancer Foundation, the largest funder of cancer research in the province.

In addition, Franck Point, owner of Faubourg Paris, will generously donate the same amount collected from macaron sales and double the donations in support of BC Cancer Foundation. The objective this year is to sell 10,000 macarons, which would result in a $10,000 donation that Franck will match to raise in total $20,000 for BC Cancer Foundation.

Check out signature Faubourg flavours like Lavender Earl Grey and Raspberry Rose, among others, available at all of their locations, including their third one, in West Vancouver.

Chef Thierry will once again be participating in “Le Jour du Macaron” and will be making a Pina Colada macaron, available only on March 20. The flavour (a coconut macaron shell filled with rum buttercream and pineapple jam) was inspired by Thierry’s time working in the Caribbean early in his career. Thierry will donate a portion of proceeds from macaron sales to St. Paul’s Hospital. 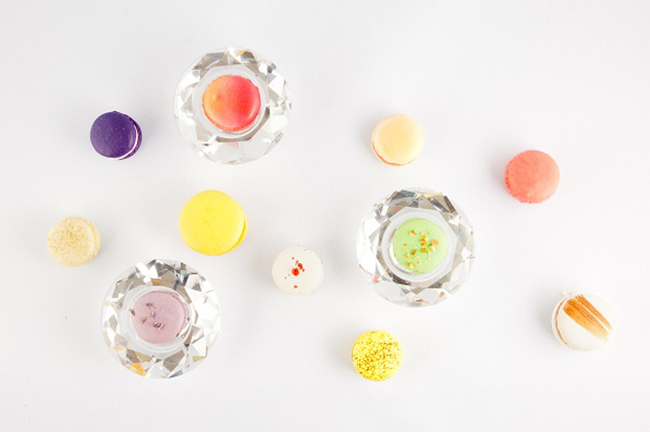 For the fifth consecutive year, Soirette will be celebrating Macaron Day. On Sunday March 20, Soirette is proud to be supporting the Make-A-Wish Foundation of BC and Yukon by giving away a free macaron for a suggested donation, and giving all donations and a portion of the day’s macaron sales to the foundation. Make-A-Wish BC & Yukon grants children with life threatening medical conditions a wish that can offer a magical and empowering experience of hope, strength, and joy. On this day, everyone who visits Soirette will be invited to make a donation in exchange for one of Soirette’s Macaron Day macarons, while quantities last.

For Macaron Day, Butter Baked Goods will offer double stack Peanut Butter Nutella Clubhouse Macarons, for $3 a piece. 100% of the proceeds will be going to Covenant House, the agency where the Mackenzie Street bakehouse donates their unsold baked goods.

This year Bel Café will be creating a specially-made caramelized honey and apricot macaron, available only on March 20. It will be composed of a two tone shell with white chocolate ganache and priced at $2. Partial proceeds (50 %) from Bel Café’s special macaron sales on Macaron Day will go towards the Greater Vancouver Food Bank. 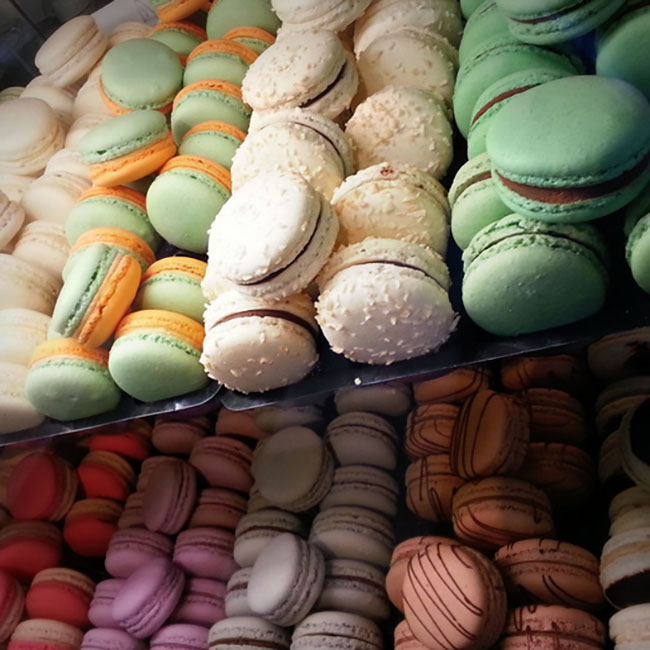 Photo courtesy of French Made Baking

For their fifth annual Macaron Day, French Made Baking is supporting the BC Children’s Hospital Foundation at their Mount Pleasant café, as well as at the Atelier Kitchen in South Vancouver. At the café, a donation jar will be available and each customer who donates will receive a free mini macaron. A percentage of all the sales of macarons will be donated to the foundation.

In addition to the 15 plus macaron flavours available, the Kingsway bakehouse is also launching a new kind of macaron so that more people can join in the fundraiser. They have crafted eggless macarons that are suitable for vegan diets, which are available in dark chocolate.

Gourmand Macaron’s Pastry Chef Paulin Calot will match the donations made by his clients to the charity of their choice on Macaron Day. Crackle Creme in Chinatown will donate 50% of their decorated macaron sales on March 20 to H.I.M, while East Village Bakery, located on Hastings Street, will donate 30% of their macaron sales (with a $50 guarantee) to Covenant House. 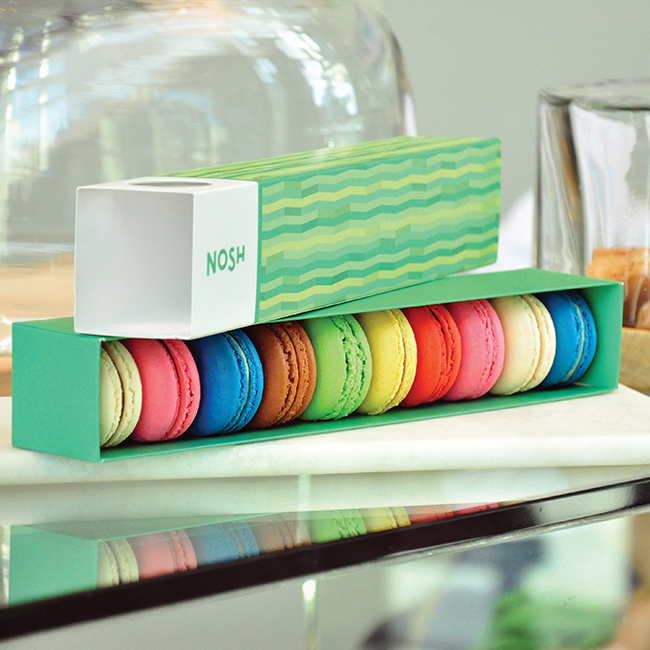 Glowbal Group’s grab-and-go café and bakery Nosh will be supporting local group Street Thug Barbers on Macaron Day, 2016. 100% of sales from Nosh’s strawberry and blackberry macarons on March 20 will be donated to the group–a trio of master barbers who offer free haircuts to those on the streets and in the shelters throughout B.C. 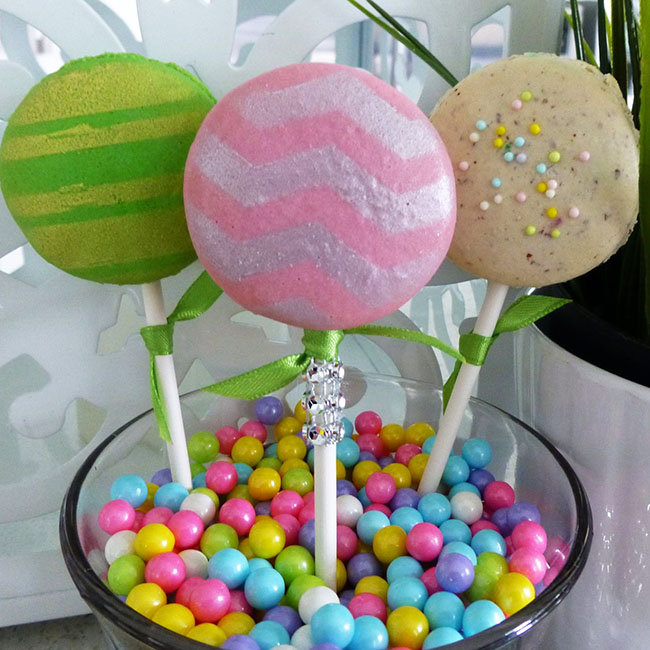 Local online bakery EastVanSweets will be offering Lolli Macs (macarons on sticks) in two flavours, Dulce de Leche and Speculoos Cookie Butter, for Macaron Day. Limited quantities will be available, from March 18 to March 20. EastVanSweets will donate 100 % of the profits to the Canadian Breast Cancer Foundation Regional Office for BC/Yukon. Orders can be made at [email protected] or by phone 604-564-1200.

Bon Macaron will be supporting BC Children’s Hospital Foundation on this year’s Macaron Day. For every 12-pack of macarons purchased on March 20 the patisserie will donate $3 to the foundation. As a thank you to their customers Bon Macaron will add an extra macaron to each box, to make a baker’s dozen. 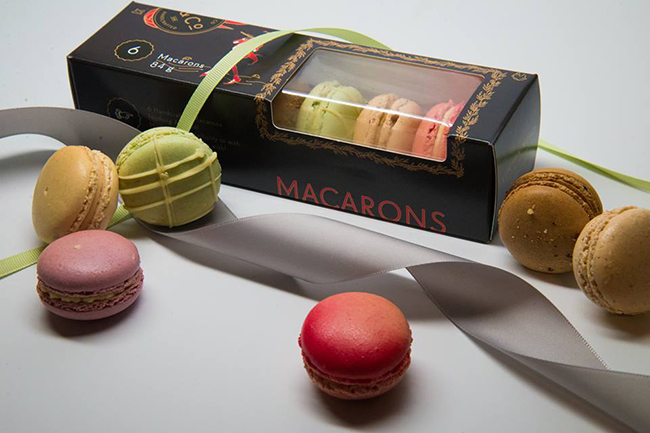 For Macaron Day 2016 Kitchening & Co. wants to donate up to $2,000 to the Immigrant Support Services Society of British Columbia for all macarons purchased between March 18 and 20. To get involved simply buy a box of Kitchening & Co.’s macarons between those dates, then follow the macaron maker on Instagram or like them on Facebook, tag them with a photo of you and their macarons, along with the hashtag #macaronday and they will donate $1 for every photo, up to $2,000.