We were first to leak the image of what the new Nordstrom will look like after it takes over the ugly white building currently occupied by Sears. The addition of Nordstrom is expected to bring a lot of shoppers to downtown and Pacific Centre (already the 2nd highest grossing mall per square foot in North America and 1st in Canada). It’s now rumoured that Cadillac Fairview intends to bring in more high end retailers into the mall as part of a new Pacific Centre expansion plan at the corner of Georgia and Howe.

Here is what we know so far:

Plans for Pacific Centre expansion have been kicking around since 2008. Originally, Victoria’s Secret was to take over the mall expansion at Georgia and Howe. However, those plans changed as the whole Nordstrom and Sears situation played out and subsequently Victoria’s Secret will have a new home, its first in Vancouver at the corner of Robson and Burrard. According to a retail insider, there are now plans for a two level luxury retail expansion next to the Four Seasons. In the mall map below, highlighted in red, is the new rumoured luxury addition to the mall. That corner is already home to Michael Kors and Stuart Weitzman. However, the Hudson’s Bay Company is looking to take Michael Kors away from Pacific Centre, thus possibly opening up even more luxury retail space. 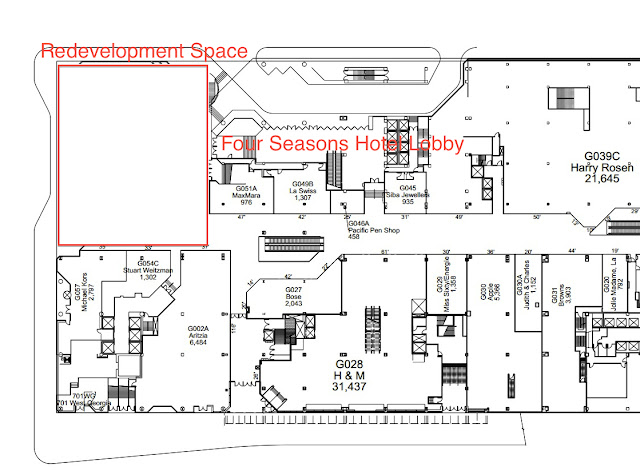 Luxury retailers would each occupy two-levels. Some of the retailers may include Chanel, Prada, Dolce & Gabbana, Cartier, Versace and one or two more. All of the mentioned retailers have been searching for Vancouver space for quite some time.

For shoppers, Vancouver between Granville and Thurlow and Robson and Georgia is heaven as it will house a lot of mid to high end luxury brands. That stretch is already home to Canada’s largest Louis Vuitton, Gucci, Burberry, Tiffany, Hermes, Salvatore Feragamo, just to name a few. Once Nordstrom and the renovated The Bay open up, the shopping experience in Vancouver will get a whole lot better. Throw in the Pacific Centre expansion and there will be very few brands that won’t be in our city.

If you think there isn’t enough money to go around, then you need to get downtown and see for yourself. On any given day the high end stores are packed with young an old. The Tiffany’s on Burrard and Alberni is one of the highest grossing Tiffany’s in North America, same goes for LV. So there is money in this town.