Sources at Retail Insider confirm that the luxury Italian brand Prada will open a flagship in Downtown Vancouver. It will be the second free-standing location in Canada for Prada, following its Toronto Bloor Street flagship which opened in 1997.

Prada will locate in the corner retail space of The Carlyle, a luxury complex at the southeast corner of Alberni Street and Thurlow Street. Prada will locate next to upscale brands Tory Burch and De Beers, as well as a number of other luxury brands which will be revealed shortly. The immediate area features luxury stores such as Burberry, Escada, Hermes, Louis Vuitton, Tiffany & Co., Montblanc and others and this spring, a 7,000 square foot Dior flagship opens at the nearby Fairmont Hotel Vancouver. Also joining the area this spring will be Canada’a first location for luxury Swiss watch brand Jaeger-LeCoultre, as well as Chinese jeweller Lao Feng Ziang.

Sources at Prada informed RI that the Vancouver store will feature men’s and women’s ready-to-wear, as well as footwear and accessories. The store will open towards the end of this year. Prada declined to provide official comment except to say that more information will be revealed closer to the Vancouver store’s opening date.

A source at the New York City headquarters, speaking off the record, explained why Prada chose Vancouver. Prada’s Vancouver Holt Renfrew concessions see robust sales, a population of loyal Prada shoppers, as well as a growing number of affluent tourists. The Alberni Street retail space itself, being on a corner with high exposure, presented a desirable opportunity for Prada, at a rent substantially less than what is being paid for many of its flagships.

For those who need a refresher, Prada is a leather goods and ready-to-wear brand the family of chairwoman Miuccia Prada set up in Milan in 1913. The group, which also owns the Miu Miu and Church’s brands, opened 250 stores in the past three years and plans 30-35 more stores this year. 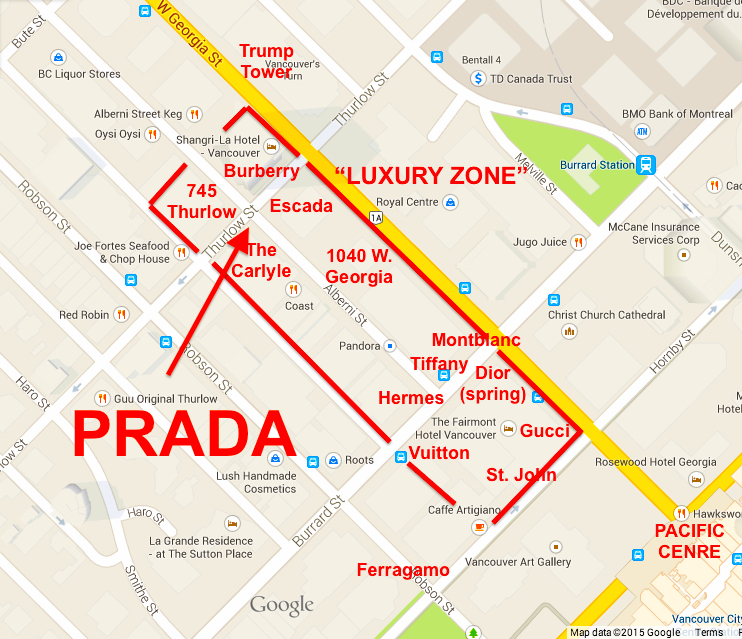