Should 16 year olds be allowed to vote?

Andrew Weaver has tabled a private member’s bill in the B.C. legislature to lower the voter age from 18 to 16.

He says sixteen year olds can drive, drop out of school, get married, sign up for the military, and taxed, although without representation.

“Most teenagers are more educated about the issues than many others. The reason why is because they access to information like never before. The voting age was not always 18 in British Columbia. It use to be 21, it was dropped to 19, and then dropped to 18. As society changes I think it is time for us to consider following the lead of other nations.”

“There is a myth that youth are not mature enough, they don’t know the issues well enough. It is largely a myth and the evidence does not support that.”

He says PEI is already experimenting with the idea, allowing 16 and 17-year-olds to vote in an upcoming referendum on electoral reform.

He adds says Austria, Brazil, Germany and parts of the U.K., among others have extended voting rights to 16. 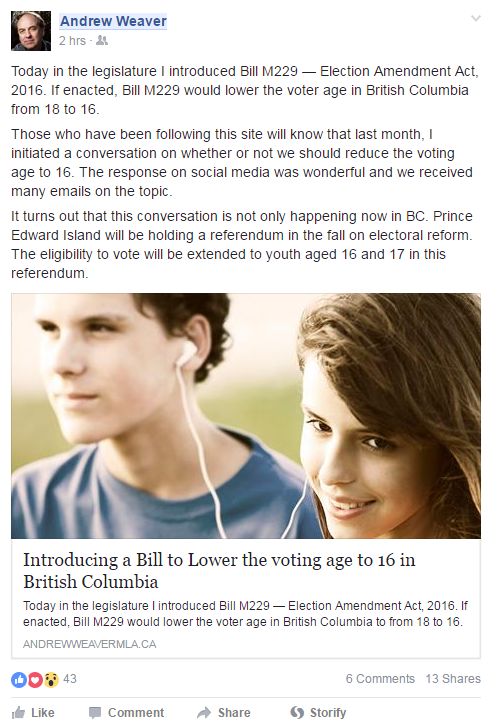 Meanwhile, at the federal level, a Vancouver MP also wants to see the voting age dropped to 16.

As the federal Liberal government makes good on a promise to create a special parliamentary committee on electoral reform, Vancouver-Kingsway NDP MP Don Davies hopes it will consider lowering the voting age to 16.

“16-year-olds they very often work they pay taxes, they get driver’s licenses they can join the army. I think that we certainly can trust them to express their views in a democratic process.”

Davies private member’s bill introduced in January has not made it past first reading.