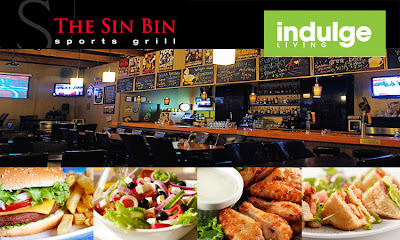 The Sin Bin Sports Grill is one of my favourite places to catch a Canucks game.You can’t get much closer to the action than watching it from the penalty box, or as it’s affectionately known, the “sin bin.” Chances are the Canucks won’t let you watch it from the real sin bin at Rogers Arena, but you can get a seat at the Sin Bin Sports Grill in the heart of the Vancouver Olympic village. Today’s indulgent deal will get you $20 worth of food for only $10 (plus get a $5 gift card for your next visit) click here to get the deal.
Watch the next Canucks game, UFC Fight, or NFL Game on their 106” projection screen TV. Come down on Thursdays for “One Night Stand” live music, or Fridays for cover-band night.

During the 2010 Olympics, players like Martin Brodeur and Teemu Selanne had a beer at the Sin Bin! Being so close to the Olympic Village, just about all of the athletes were known to visit this bar.

Check out their calendar of events, drink specials, and full menu on their website. Next time you want to indulge in a beer, food, the next game, live music, or just enjoy good company, skate into the Sin Bin Sports Grill.
VancityBuzz.com